Inferse.com
Ads
Home Latest News Ford to Tesla: "We got it from here" – The Big Picture... 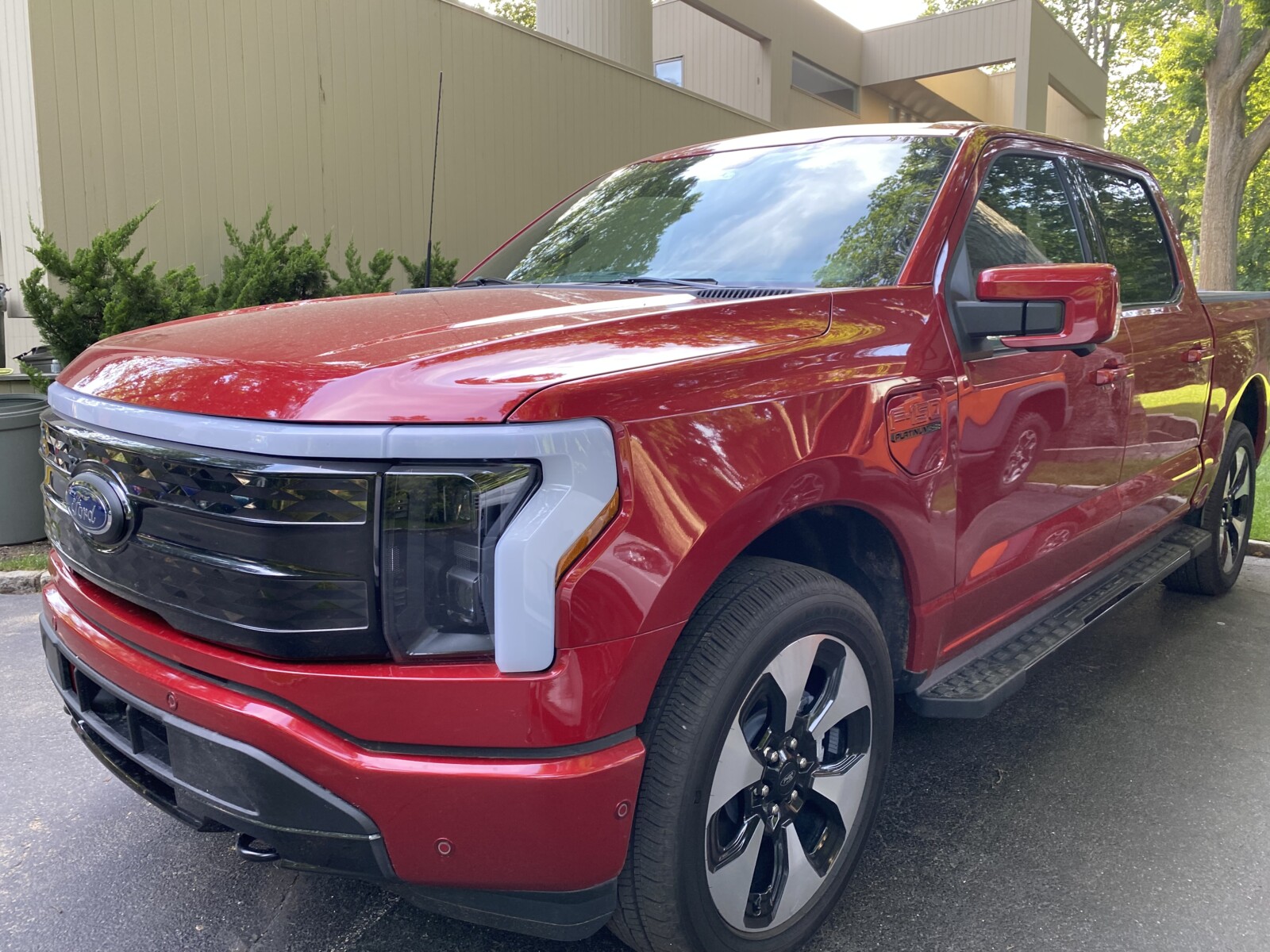 The most fascinating thing about Tesla is how the electric vehicle maker forced the entire automotive industry forward.
Elon Musk deserves much of the credit, but it’s easy to overlook the contributions of Amazon‘s Jeff Bezos. Over the past 25 years, Amazon has cut a devastating swath across the entire retail sector, as stores, malls, wholesalers, and retailers watched profit margins shrink and their customers abandon them in droves.
Legacy automakers saw the devastation wrought by Amazon and decided they were having none of it. They would not allow Musk to do to them what Bezos did to the retailers. Despite being calcified, bureaucratized, century-old legacy automakers, they reacted quicker than retailers did. The result is a burgeoning EV market with dozens of new models for sale today and many dozens more coming over the next 36 months.
This is how the $40,000 Ford F150 Lightning came to be.
I spent a week with this behemoth and it’s quite a spectacular vehicle, very different than my usual rides. I will share a few thoughts about the F150 Lightning, my expectations for how it will do, and what the future might bring for EVs, Tesla, and legacy automakers.
The Lightning
This is a full-sized pickup truck, with the same dimensions as the traditional Ford F-150, the best-selling vehicle in America for the past 40-plus years. If a pickup is your regular drive, you will feel right at home in this vehicle.
The Lightning comes in four flavors: Pro ($39,947), XLT ($52,974), Lariat ($67,474) and Platinum ($90,874). My tester was a maxed-out Platinum with a $94k sticker. It’s a high-quality Luxo-barge, with excellent fit and finish and all sorts of great tech.
The dual-motor extended-range battery cranked out 580 horsepower (about the same as my BMW M6) and 775 lb-ft of torque. On a full charge, you can expect 300 miles for the Platinum (320 miles for the Lariat). How you drive has a huge impact on range. With the truck fully loaded and driving a careful 55 mph east got much better gas mileage than I did stomping it on the way home with an empty pickup bed.
The base version at $40k is a whole lot of truck for the money: AWD, dual motors good for 452 horsepower and 775 lb-ft of torque and a range of 230 miles. Ford noted more than half of the pre-orders were the midrange models.
It’s handsome, as far as pickups go. The light bars front and back and the charge port on the driver side (the one on the passenger side is a dummy) are the only external cues this is not your usual internal combustion engine (ICE) F-150. The immense vertical touch screen in the center of the dashboard is another clue.
One other thing: Wherever we went, the Lightning attracted attention. People came up to us in parking lots, outside of restaurants, at the beach, wherever and wanted to ask about the F150. Once these become more common expect the attention to fade. 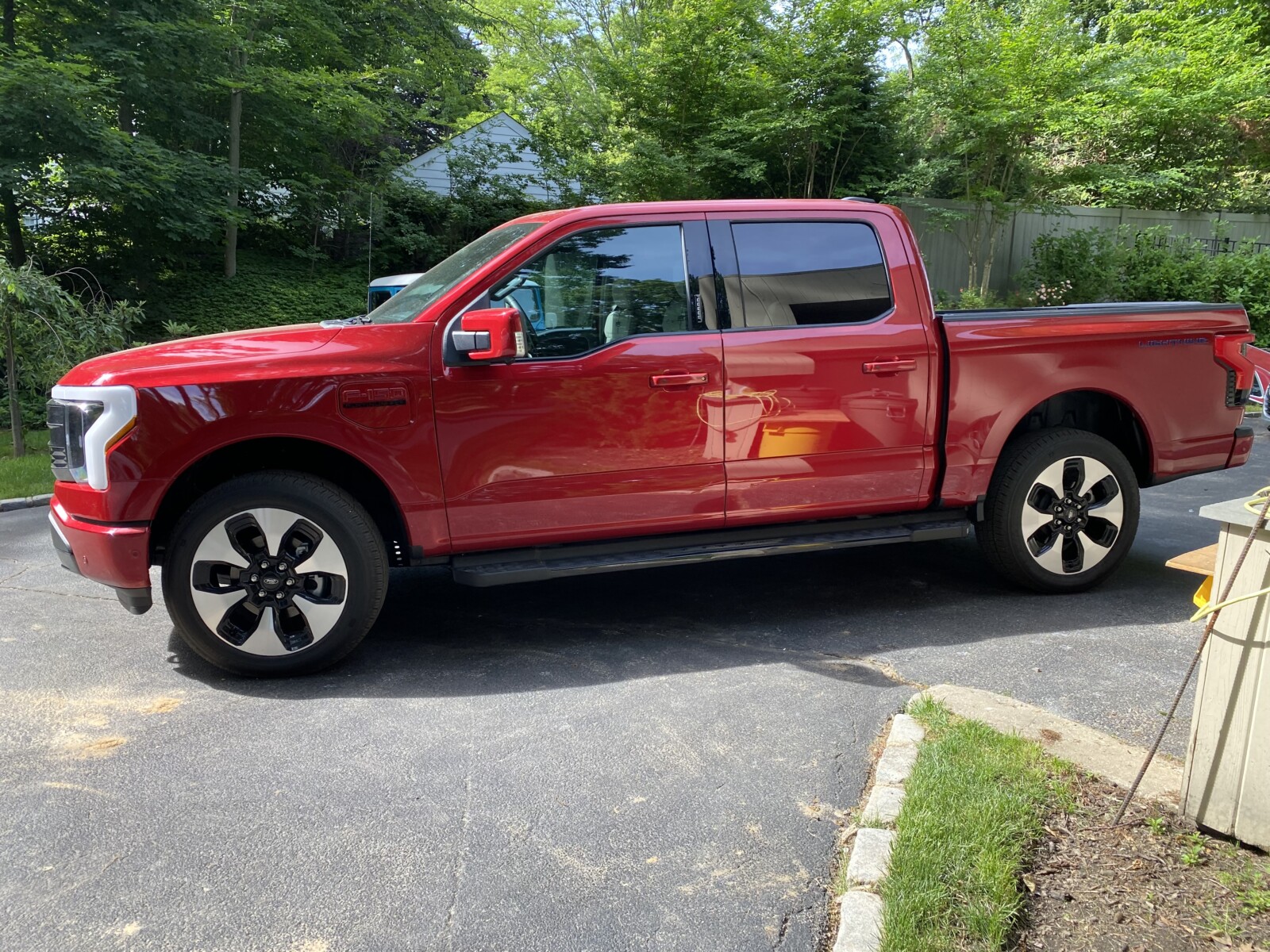 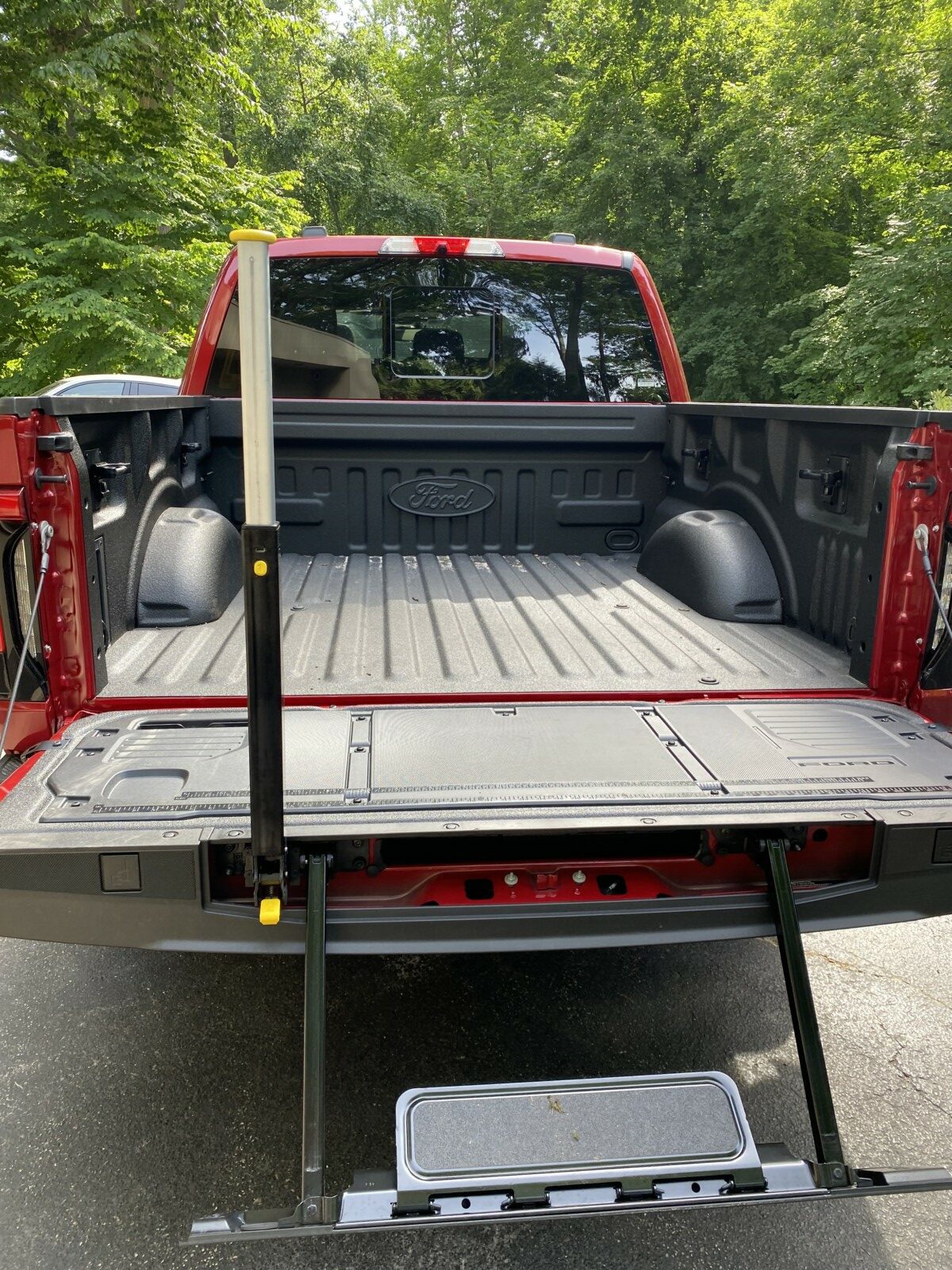 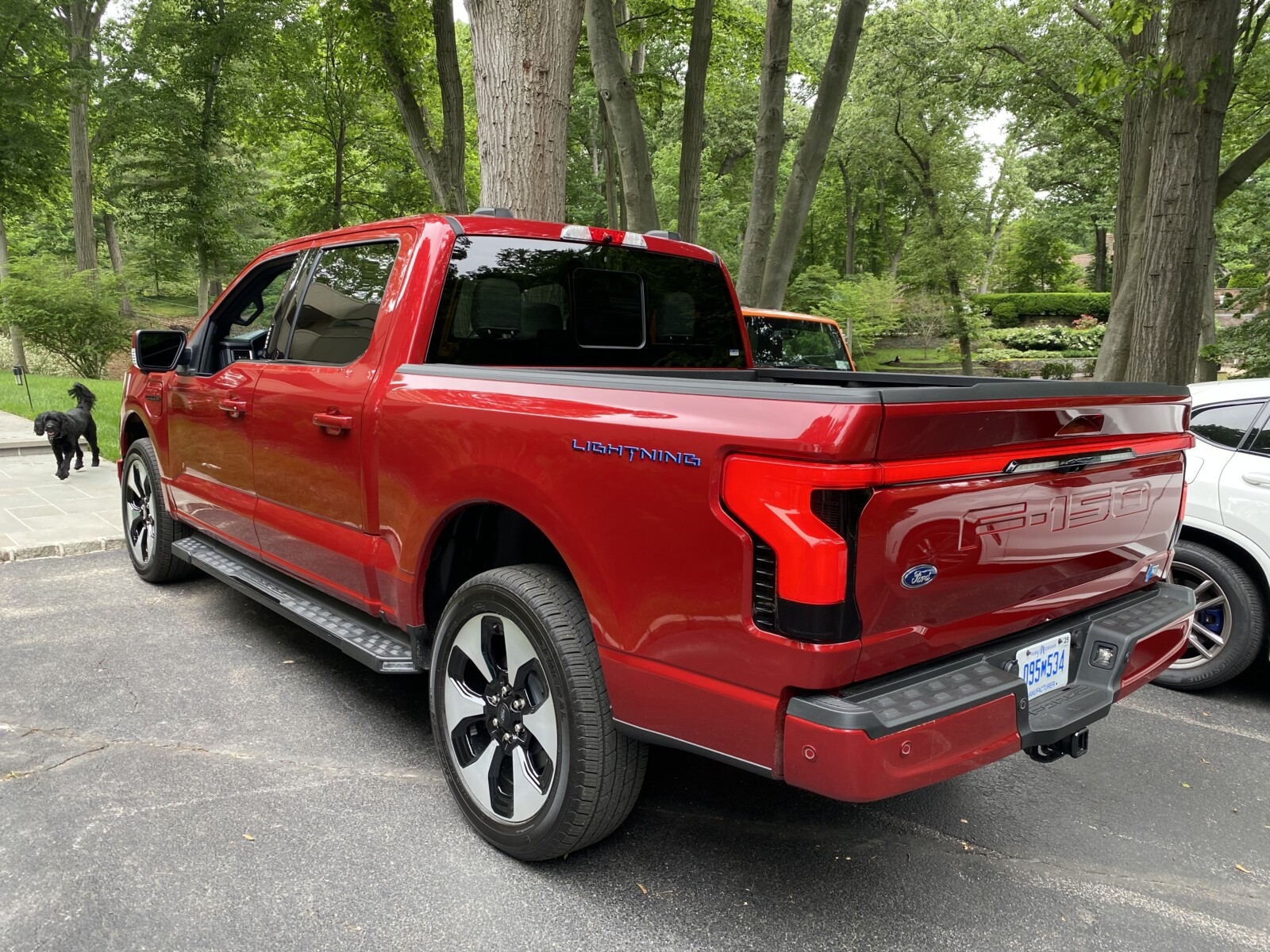 Driving
I normally don’t drive a pickup truck or even a full-sized SUV. I tend towards low-slung, high-horsepower fun machines; even my past three utility vehicles were a BMW X4, Porsche Macan S, and Honda Crosstour.
It took a little getting used to something of this size and heft.
Slide 1,500-1,800 pounds of battery underneath and you have a 6,855 pound vehicle that handles rather differently than a sports car. It takes more than a gentle thumb to move the steering wheel of this beast through any sort of turn. Bringing the behemoth to a dead stop requires planning and anticipation. This is a genuine issue because the Lightning accelerates to 60 mph in just 4 seconds. It pains me to say this, but it’s testimony to the superiority of the EV platform versus traditional ICE just how fast this truck is.
The Platinum is a very comfortable ride with all of the creature comforts and luxury settings you would expect from a near 6 figure truck. If your usual SUV is an Acura or Lexus, you will find yourself surprisingly comfortable in the Lightning. 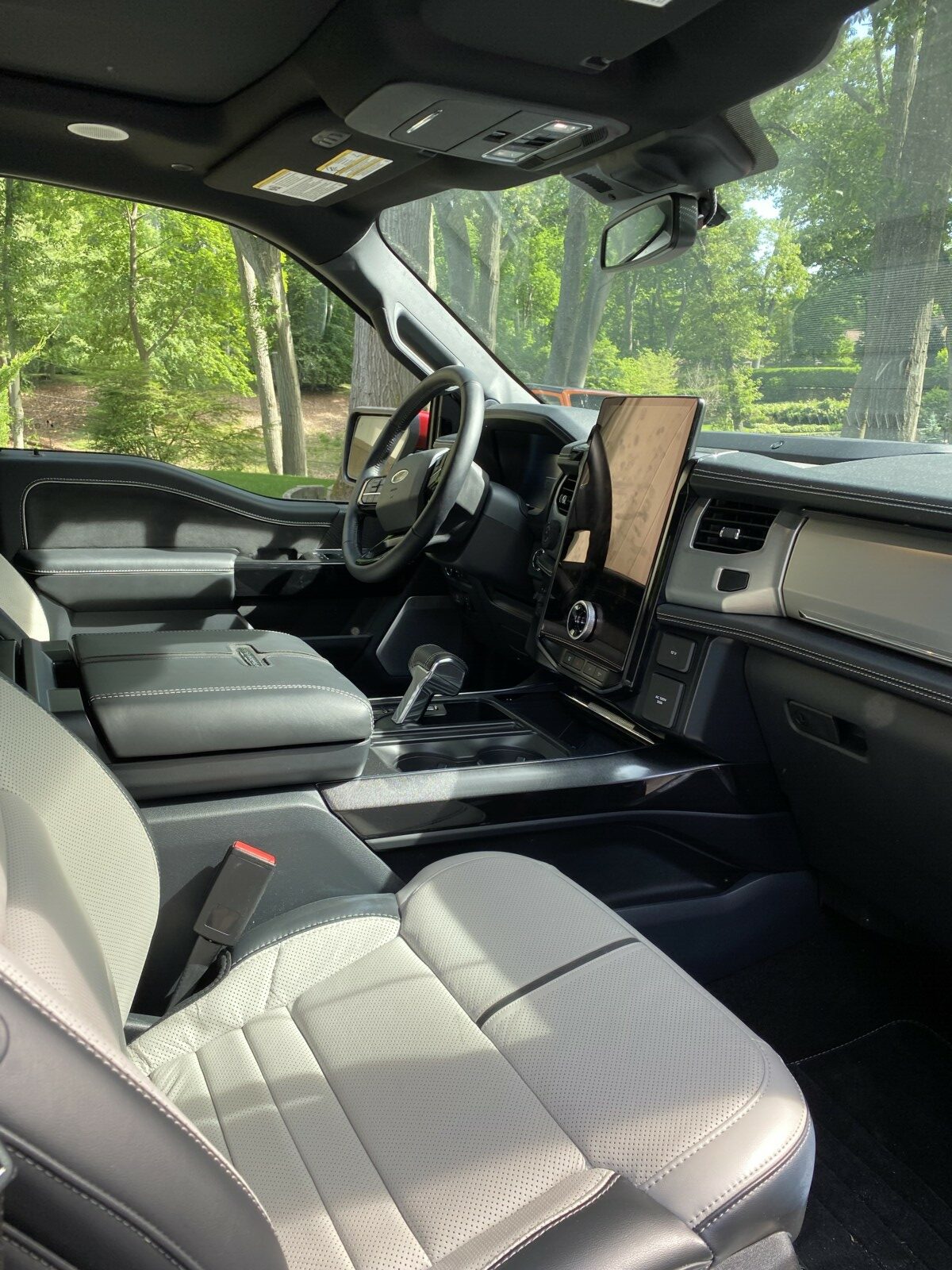 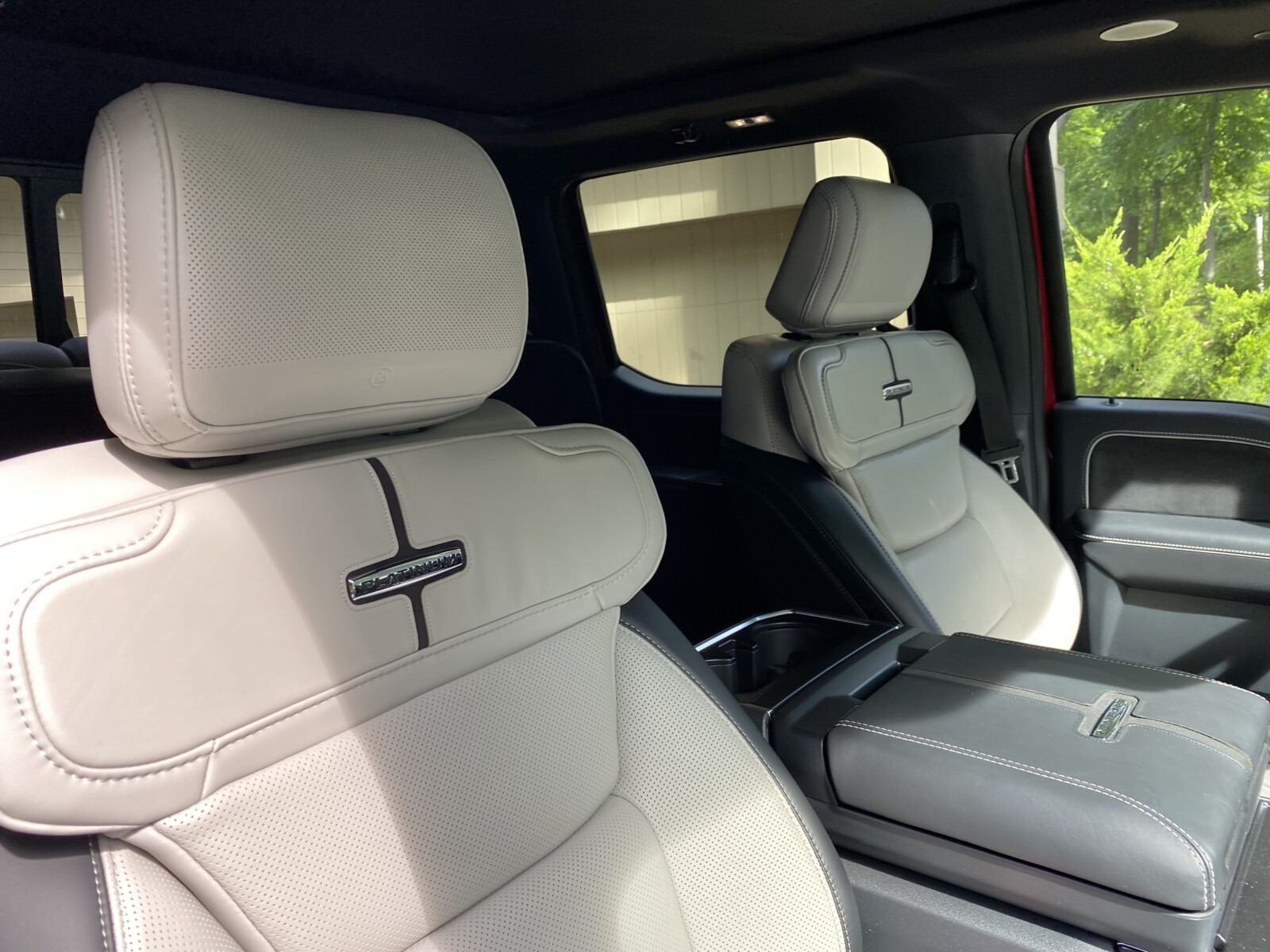 Space
The F150 is huge inside. Grab handles on the A pillars make it easy to pull yourself into the driver or passenger seat of the spacious cabin. The rear seats of the Crew Cab were spacious for even the largest inhabitants. They fold up, in case you (lol) need even more space.
The five and a half feet bed (67.1 inches) swallowed up a big 4 burner grill, a 6 foot outdoor table, and a disassembled Roman hammock, along with other assorted stuff for our drive out to the beach house.
But the show-stopper was the “Frunk” – the massive front trunk that was about the size of a normal passenger car trunk. I tossed a few overnight bags and other goods in it with plenty of room to spare. 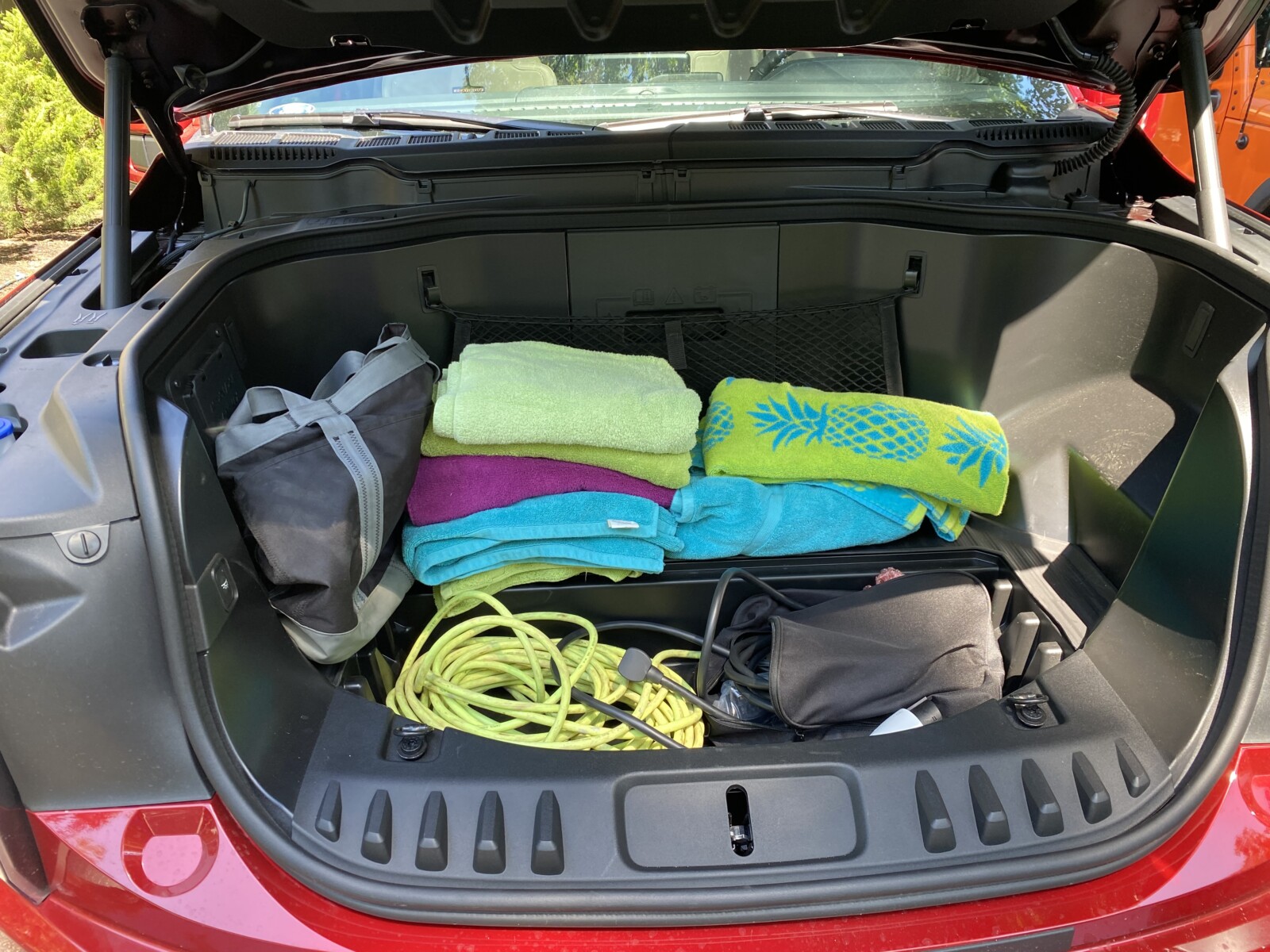 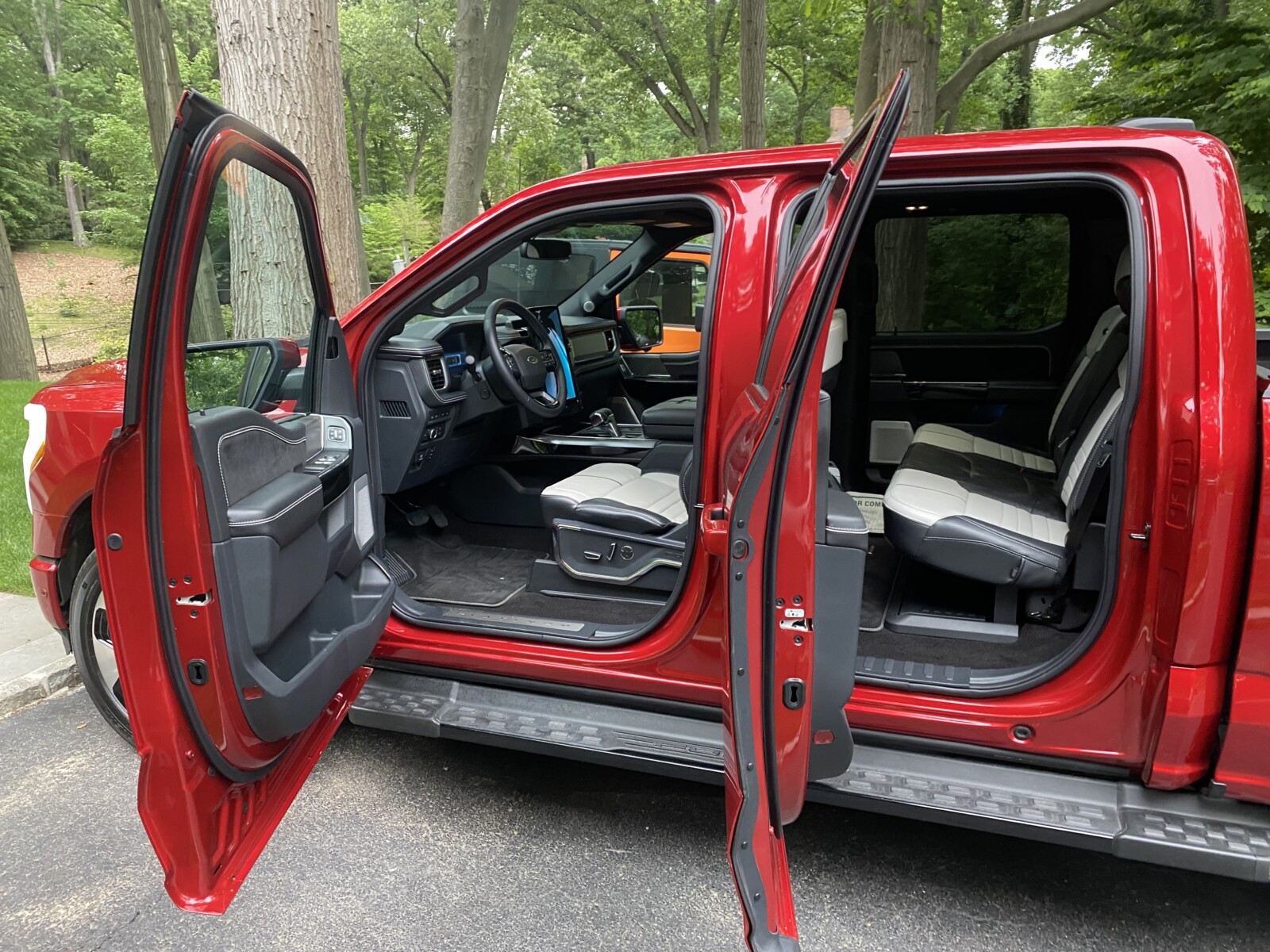 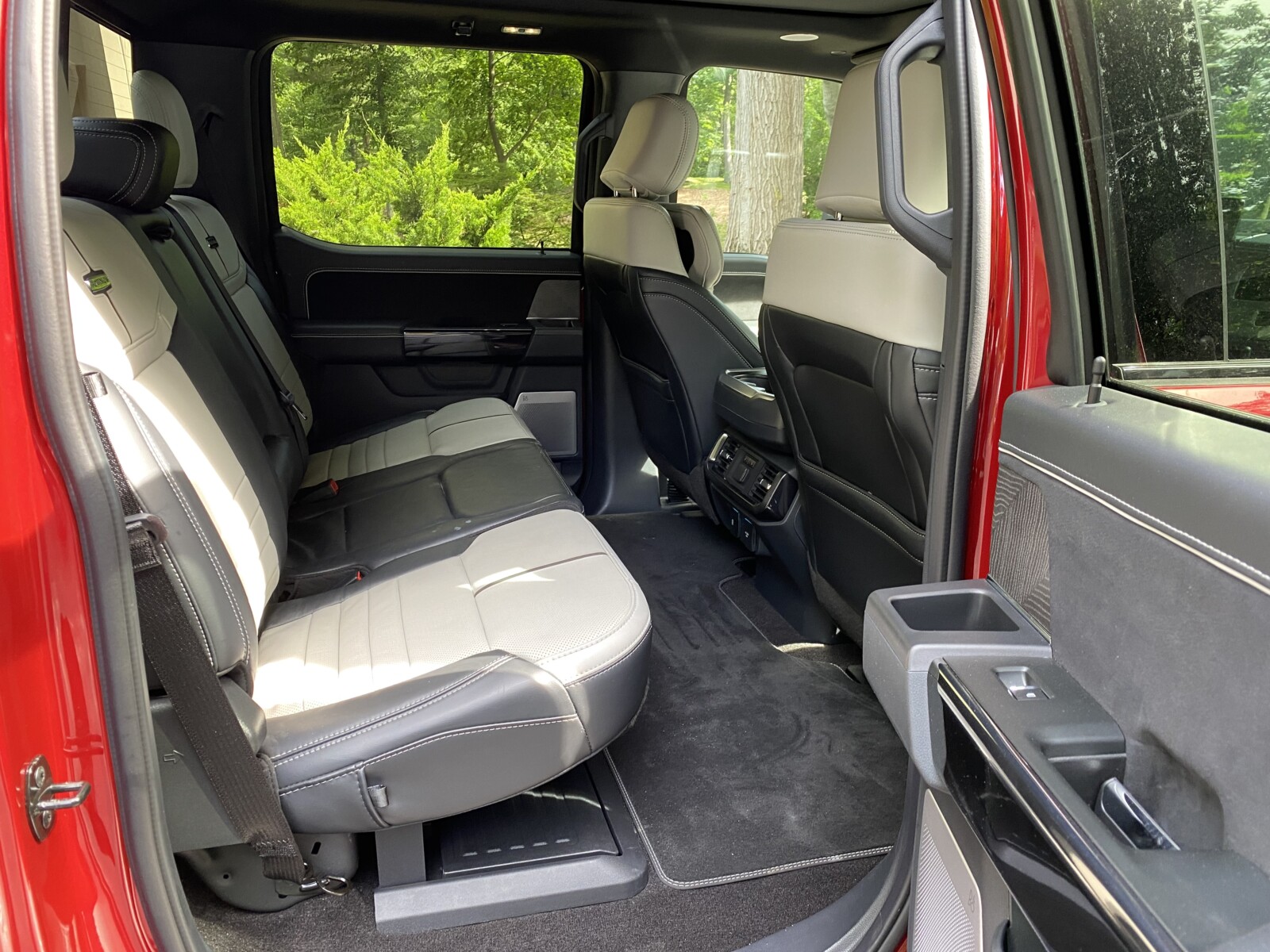 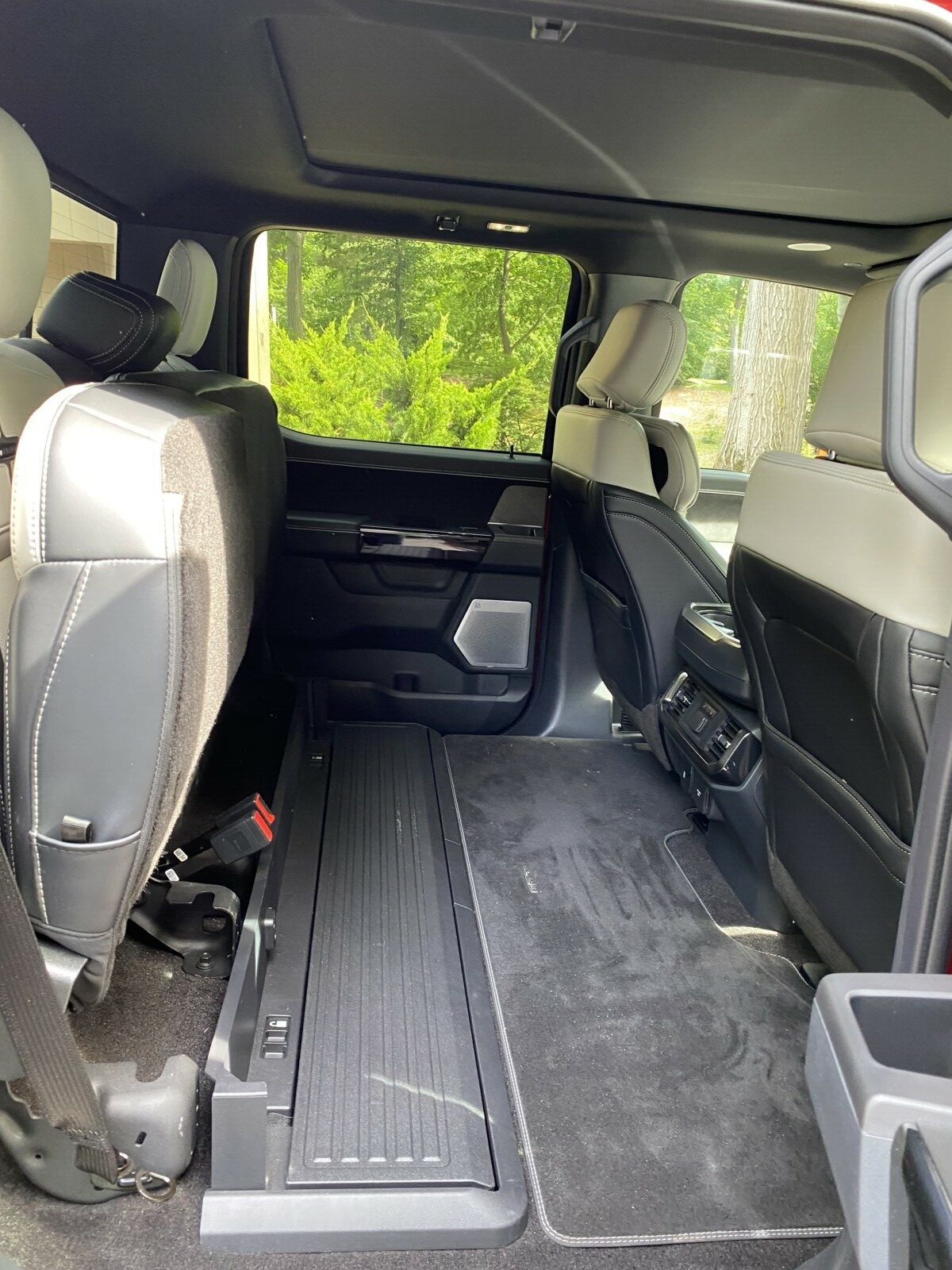 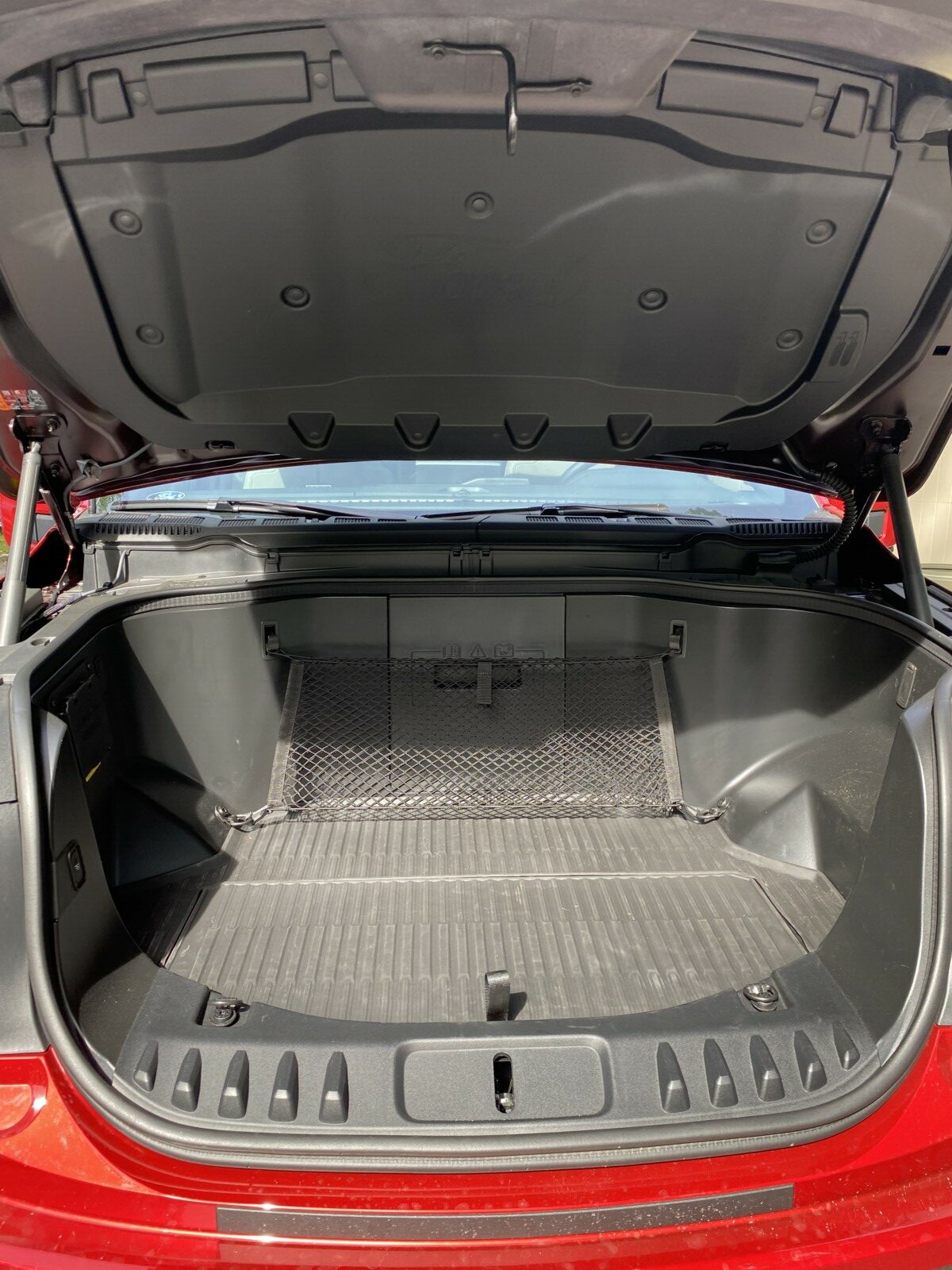 Features and Options
I really liked the wonderful driver assist / lane keep / cruise control. It works well, nearly invisibly, and only requires you stare ahead at the road – hands on the wheel or not. But look at the giant center screen for more than moment and it nags you to pay attention.
About that screen: My beef is the same one I’ve had with every EV I’ve driven: controls buried two or three screen layers in that would have worked better as physical buttons. In fact, I would prefer if all EV makers had a simple strip of climate controls as physical buttons including heated and cooled seats and ventilation recirculation. Before you “OK, Boomer” me, it is obvious to someone who has been driving longer than you have been alive that this is going to cause accidents — it’s just too distracting. Probably less damage than cell phones have caused, but there will be accidents nonetheless.
But the center screen is fast and responsive, with Ford’s trademark giant volume knob bottom center. The bottom 2 inches of the screen is reserved for climate controls. It’s as good an automobile infotainment screen as any I’ve seen, regardless of price.
There are outlets and charging ports everywhere: In the front, the back, the frunk, the pickup bed. This is a vehicle that expects to be busy at work sites. 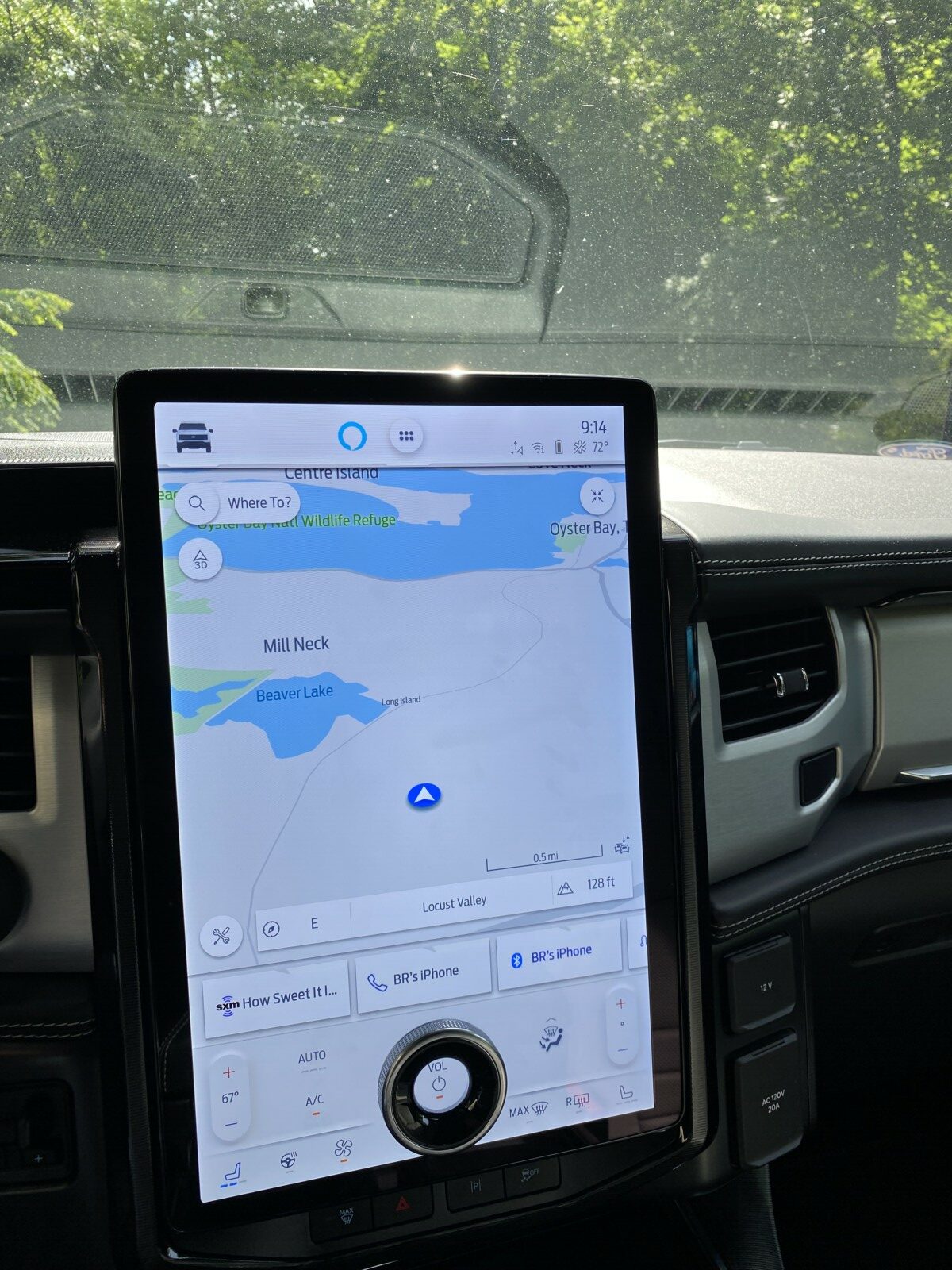 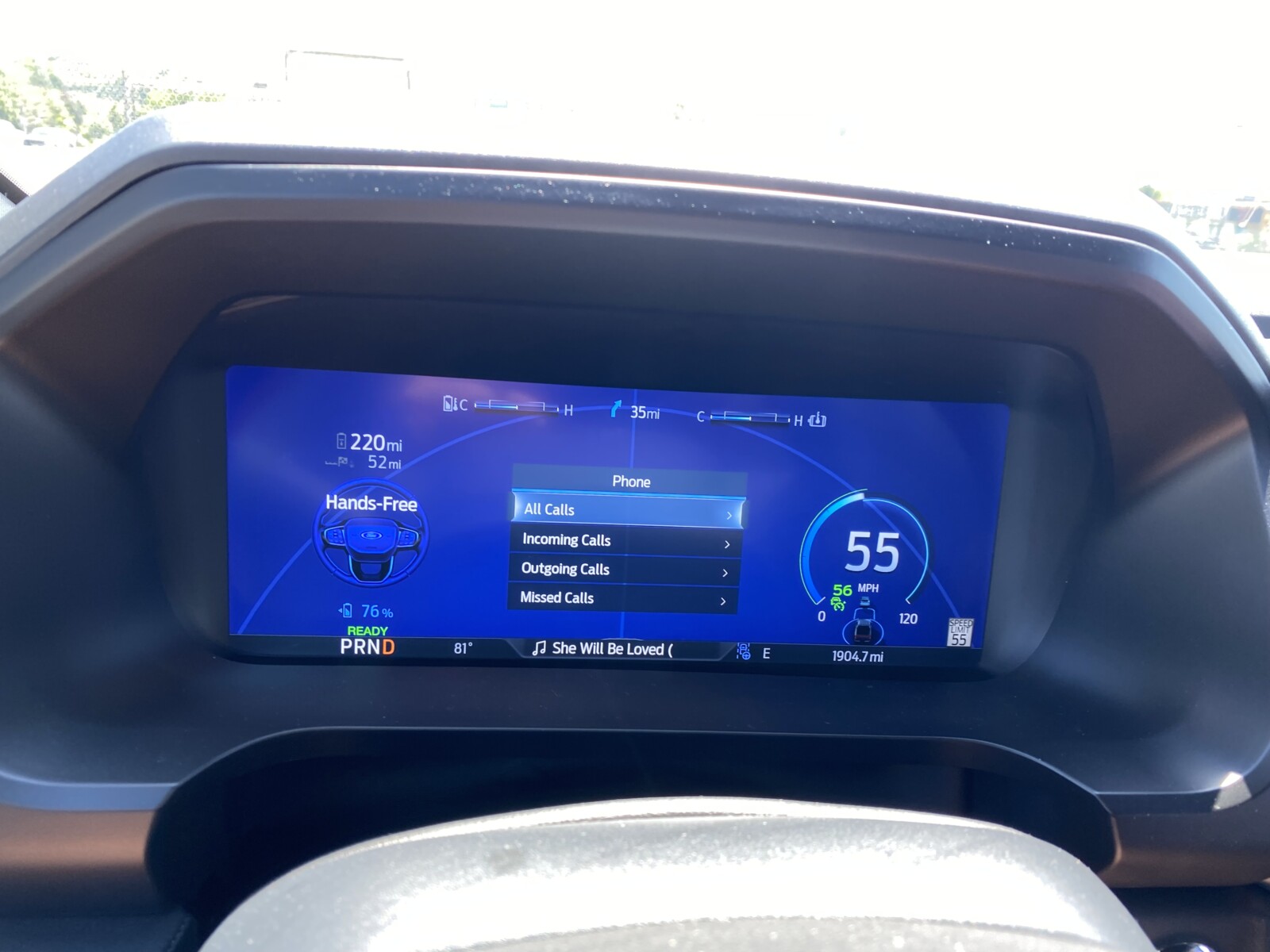 Range and Charging
The truck arrived 85% charged and I thought I would top it off. I plugged the truck’s charger into an extension cord running into the garage and the orange light came on which I assumed meant it was charging. It was not as I discovered the next morning. A quick search of the Ford message boards and I discovered that I needed to make sure the plug was clicked into place and when that occurred the charging light turned blue. Chalk it up to a newbie error.
A 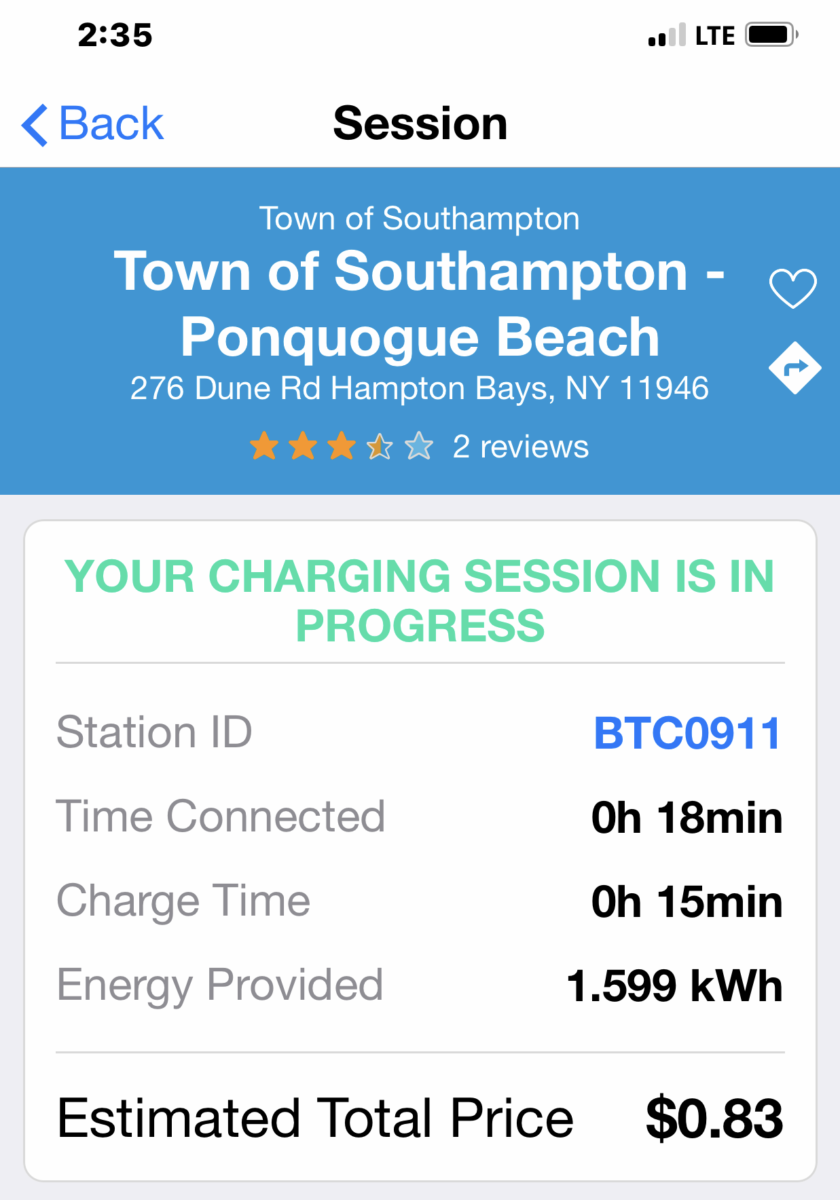 regular 120-volt source of power adds only a few miles of range per hour. Overnight gets you barely 30 miles.
At the beach, we were able to snag primo parking at the chargers. I use the app “EV Connect” and added another 35 or so miles of range for $6 over 2 hours. I had no idea at the time that this would be a bargain with gas over $5 a gallon.
By now, you probably have heard you can run your entire house off of a fully charged truck for 3 days.
I was amused by how much of my usual vocabulary has been driven by a lifetime of experiences with ICE: “Step on the gas, fill up the tank, exhaust note, engine – all phrases that served as constant reminders this is a new era.
~~~
Would I buy a Ford F-150 Lightning or any other EV today?
I have no need for a pickup truck so the Lightning is out of the question for me. However, I have no doubt that this is going to be a massive seller for Ford. I suspect this is likely to be the vehicle that gets middle America to adopt electric vehicles.
As to other EVs, what I like seem wildly overpriced relative to their ICE competitors: Porsche Taycan, Audi GT eTron, even the Lucid Air and Tesla Plaid are quite expensive,  even with gas over $5 a gallon. That’s before we install a 240 charger in the garage here and at the beach house.
As of today, I am not an ideal customer for pure EVs, much more inclined toward hybrids. We were looking at winter homes pre-covid – if the housing market returns to sanity we would want an SUV we can load up for the trip back and forth down the coast without the need to plan around charging. My shortlist includes new versions of Defender 110 or the HSE Sport available soon in the US; the UK versions are high-performance hybrids garnering high double-digit MPG. If BMW ever decided to share their X5 hybrid technology with the X6, I would add that to our shortlist as well. And ever since I totaled my wife’s Panamera 4S (T-boned at 5 mph) the hybrid version of that vehicle has been on my list also.
We are in the transition period from ICE to EV – a hybrid would serve my family’s needs well.
Spending a week with the Ford F-150 lightning left me with no doubt about a few things:
-The truck is going to be a huge hit (even if I don’t feel the need to be an early adopter).
-The transition to EVs is going to happen much faster than people expect;
-Ford has gotten its game together and is going to be a serious challenger to Tesla. They’re fit and finish is vastly superior, but Tesla still has the edge in terms of software and programming.
-Don’t be surprised to see an electrified version of the smash hit Bronco within two years also.
-We are already past peak ICE, but they will stay on the road for another 10 to 20 years after initial sale;
-Credit to Elon Musk (and Jeff Bezos) for driving us into the future.
EVs are here, and the future is coming fast. Faster than you might think…

© 2022 The Big Picture
Get subscriber-only insights and news delivered by Barry every two weeks.

Damian Lillard re-posts on Instagram: Loyalty has an expiration date –...

Four Good Reasons to Be Optimistic About Bitcoin: Is Bitcoin the...