Following yesterday’s launch of orders for the two new 35-watt dual USB-C power adapters introduced at WWDC, Apple has posted a new support document outlining how power is split when devices are connected to both ports. 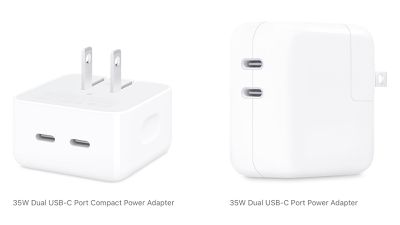 Under most scenarios, the 35 total watts will be split evenly between the two connected devices, with the exception being when one of the devices has relatively low power requirements, such as an Apple Watch or AirPods case.

The standard version of the dual USB-C adapter is available worldwide and has a removable plug head for compatibility with international plug heads and extension cables. The compact version is only available in the U.S., Canada, China, Japan, Mexico, and a few other countries that use the Type A plug style. Both versions are priced at $59 in the United States, and the new adapters will ship with higher configurations of the new MacBook Air launching next month.

OnePlus 10: Everything you need to know – Tech Advisor

Android 13 Beta 2 expands what you can create with Emoji...

OnePlus 10: Everything you need to know – Tech Advisor

Wild solar weather is causing satellites to plummet from orbit. It's...