The first Elon Musk stimulus package for Dogecoin holders is here. As the cryptomarket as a whole tumbles and tries to recover its balance, an Elon Musk tweet made Dogecoin pump. This time, the subject is McDonald’s. The fast-food restaurant’s community manager has been teasing crypto people, offering them jobs now that the market is down. And Musk took the fight to their doorstep.
I will eat a happy meal on tv if @McDonalds accepts Dogecoin
— Elon Musk (@elonmusk) January 25, 2022

The challenge is, “I will eat a happy meal on tv if McDonalds accepts Dogecoin.” So far, the restaurant hasn’t responded. The market did, though. Since Elon Musk’s tweet, Dogecoin went from $0.1333 to $0.1449. And the day is not over. Will the coin keep pumping? Or is a crash inevitable? We’ll have to wait and see.
The Tesla billionaire has been playing with the Dogecoin community for a while now. His affiliation with the meme coin has reached such a level that journalists ask him about it in every other interview. And, of course, Bitcoinist has been there to document every Elon Musk pump.
For example, when the billionaire tweeted that Bitcoin and Ethereum were too slow compared to DOGE, the market reacted.
“The tweet was meant with much optimism from the Doge community. The coin which has been taking massive hits since the crypto bloodbath began saw a significant boost in the price of the coin.
Doge which had fallen below the $0.20 threshold saw a bounce back in the hours following Musk’s tweet. The rebound pushed the coin price back up over the $0.20 price point. And now the coin is trading a little above $0.22 at the time of this writing.”
Notice that the market was also in the middle of a “crypto bloodbath” when Elon Musk tweeted that one time. On another occasion, when the billionaire tweeted that he was considering opening The Texas Institute of Technology & Science, a university that would accept tuition in Dogecoin, the market reacted:
“Dogecoin saw $3 billion added to its market cap following the tweet, setting it up on a path to try to reclaim its spot from top rival Shiba Inu. However, the new sweetheart of the dog-themed tokens community maintained its hold above Dogecoin. DOGE’s rally towards $0.3 brought its market cap close to that of SHIB which had suffered through the weekend.” 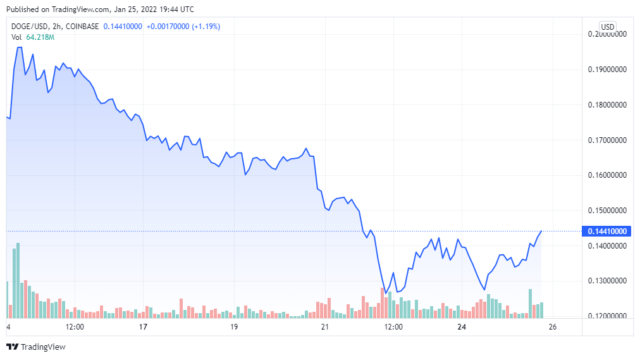 Not all of Elon Musk’s shenanigans resulted in a pump. When he put no effort into it and just tweeted “Release the Doge,” the market remained static and Bitcoinist asked, “has Musk lost his edge over Dogecoin?”
“Investors began calling for the billionaire to resume tweeting about Dogecoin. Which had by this point lost over 60% of its all-time high value. But Musk seemed committed to not tweeting about Dogecoin.
The price which had risen significantly to as high as $0.80 went back down below $0.20. Before making a small correction and receiving back up above $0.20. Where it currently sits trading in the $0.20 range.”
And then, of course, it’s the infamous Elon Musk SNL appearance. When the billionaire hosted Saturday Night Live and failed to produce even the slightest laugh, DOGE suffered.
“To the disappointment of many, however, Musk’s cameo ended with the cryptocurrency tumbling nearly 30% in less than an hour. Its prices plummeted from $0.69 to a new low of $0.49, before paring losses by recovering to as high as $0.55. At press time, Dogecoin is trading at $0.53.”
Of course, one has to notice the stark difference in prices. As we said, DOGE is currently trading at $0.1449 and people are celebrating. Far, far away from the heights of its glory days. Will the fast-food restaurant come to the rescue and pump Dogecoin even higher? Stay tuned to Bitcoinist to find out.
For updates and exclusive offers enter your email.
Eduardo Prospero is an author, a content writer, and a professional rapper. A Bitcoin maximalist in disguise. Working on a Bitcoin book. Beware of my Telegram impersonator!
Bitcoin news portal providing breaking news, guides, price analysis about decentralized digital money & blockchain technology.
© 2021 Bitcoinist. All Rights Reserved.

Nothing's Phone Launcher Gets a Big Update for All – Droid Life

Nothing's Phone Launcher Gets a Big Update for All – Droid...

Bill Taylor - June 28, 2022
We may earn a commission when you click links to retailers and purchase goods. More info.The Nothing Phone’s launcher that Carl Pei’s company released...

The Pixel Watch could be Google's last chance to get Wear...

A Tesla in the Garage + Home Solar Power = Energy...

Pixel 7 took Apple’s pill-and-hole design before the iPhone 14 even...