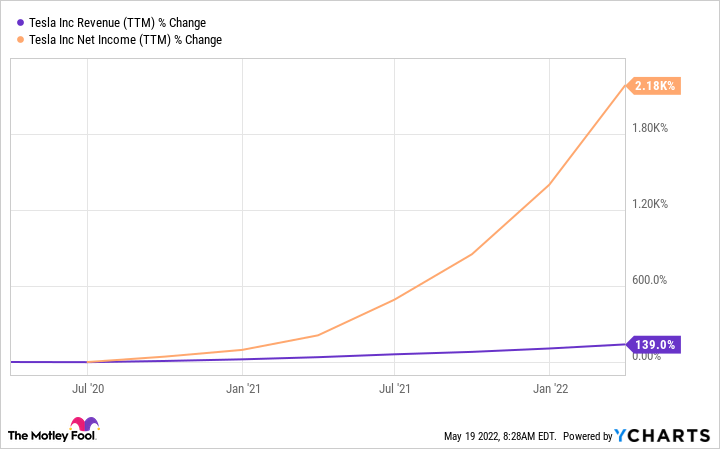 TSLA Revenue (TTM) data by YCharts. TTM = trailing 12 months.
Even as Tesla confronts a growing number of competitors, its sales are ramping up. And it doesn’t spend any money on advertising — word of mouth has proved sufficient thus far.
A lot of that has to do with the introduction of the Model 3 and Model Y, the mass-market sedan and crossover EV, respectively. It has now begun shipping the Model Y from its Gigafactory in Texas, where it is incorporating its 4680 battery cell made in-house, which is likely to be an important development in light of the supply chain crisis still gripping the auto industry.
A Tesla Model Y. Image source: Tesla.
Tesla went public on June 29, 2010, at a price of $17 per share, above its expected range of $14 to $16 per share, and last year exceeded $1,200 per share, which was after a 5-for-1 stock split in 2020 when shares were trading for over $2,200 each.
As noted, today the EV maker’s stock is down to around $700 a share, which hurts if you got in near the top, but means you’re still doing phenomenally well since the IPO. For those investors, we’re talking about a near 13,800% increase in value, meaning a $10,000 investment 12 years ago would be worth $1.39 million today. 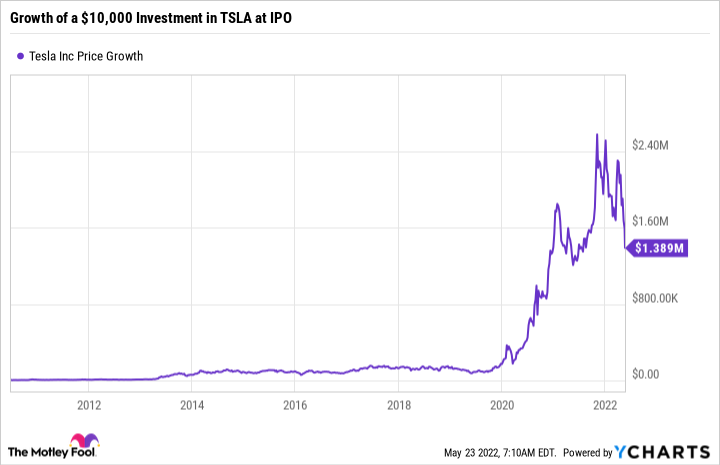 TSLA data by YCharts
It’s not likely Tesla will maintain that kind of growth. Not only is it seeing more competition from upstarts like Rivian and Lucid, which want to break into the market, but established automakers like Ford, GM, and Toyota are vying for a slice of the pie, too. Just about every manufacturer today has an EV on the road or in the works.
But there’s good reason to believe that Tesla will maintain its industry dominance for years to come, and even with its CEO’s manic personality, its stock should remain a great investment for just as long.

*Average returns of all recommendations since inception. Cost basis and return based on previous market day close.
Market-beating stocks from our award-winning analyst team.
Calculated by average return of all stock recommendations since inception of the Stock Advisor service in February of 2002. Returns as of 06/20/2022.
Discounted offers are only available to new members. Stock Advisor list price is $199 per year.
Calculated by Time-Weighted Return since 2002. Volatility profiles based on trailing-three-year calculations of the standard deviation of service investment returns.

Invest better with The Motley Fool. Get stock recommendations, portfolio guidance, and more from The Motley Fool’s premium services.
Making the world smarter, happier, and richer.

Here's Why Alphabet Is Even Cheaper Than It Looks – The...