Apple’s online store is down ahead of iPhone 14, iPhone 14 Pro, and AirPods Pro 2 pre-orders, which are expected to be available at 5:00 a.m. Pacific Time in the United States. 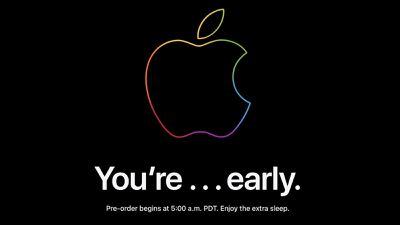 “You’re… early” reads the Apple Store‘s message when visiting the U.S. website. “Pre-order begins at 5:00 a.m. PDT. Enjoy the extra sleep.” Apple has been doing 5:00 a.m. pre-orders for the last several years instead of the 12:01 a.m. Pacific Time pre-orders that we used to have.
The ‌iPhone 14‌, ‌iPhone 14 Pro‌, and AirPods 2 are launching in more than 30 countries and regions around the world, and a list of launch times can be found in our time zone guide.
Apple’s ‌iPhone 14 Pro‌ models feature the most notable upgrade, with a new Dynamic Island that replaces the notch, an A16 chip, and a 48-megapixel camera. The standard ‌iPhone 14‌ models have a regular notch, an A15 chip, and a 12-megapixel camera, though there have been improvements to low-light across all devices and all lenses.
Both iPhones support 5G and a new Emergency SOS via satellite feature that can put you in touch with emergency services even when you don’t have a WiFi or cellular connection. There’s also a Crash Detection feature that can detect when you’re in a serious car crash, alerting authorities. Crash Detection uses an upgraded gyroscope and accelerometer.
The ‌AirPods Pro‌ 2 have been improved in almost every way, offering better sound, 2x improved noise cancellation, a Transparency Mode that can more intelligently block out loud sounds like sirens and road construction, and new controls for adjusting volume right on device.
Pricing on the ‌iPhone 14‌ starts at $799, while pricing on the ‌iPhone 14 Pro‌ starts at $999. The ‌AirPods Pro‌ 2 are priced at $249.

When will iOS 16 and iPadOS 16 be released? Here’s everything we know.
Apple on July 20 released iOS 15.6 and iPadOS 15.6, bringing improvements to the live sports experience in the TV app and several bug fixes.
Apple Watch SE or Apple Watch 7 – which one to get?
New iPhones are out. Which one should you buy?
Apple’s new high-end iPhone models with Dynamic Island camera cutout, A16 chip, 48MP main camera, and more.
Apple’s latest mainstream iPhone models in two sizes with A15 chip, car crash detection, satellite connectivity, and more.
Lock Screen customization, Messages improvements, and more.
New body temperature sensors, car crash detection, and more. Pre-order now.