Kitco News
Share this article:
Editor’s Note: With so much market volatility, stay on top of daily news! Get caught up in minutes with our speedy summary of today’s must-read news and expert opinions. Sign up here! 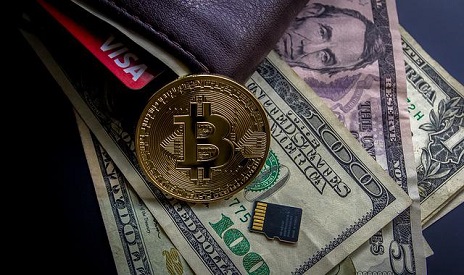 (Kitco News) – At a time when the majority of public-facing conversations about blockchain technology and cryptocurrencies revolve around price and the latest government regulations, some of the world’s largest companies are investing billions of dollars to develop future use cases.
Data published in a recent report by the blockchain intelligence firm Blockdata shows that 40 corporations invested in blockchain-related companies between September 2021 and June 2022.
Google’s parent company Alphabet ranked at the top of the list in terms of the amount invested, with $1.56 billion invested in blockchain companies during the designated time period. BlackRock and Morgan Stanley rounded out the top three with $1.17 billion and $1.1 million invested, respectively. 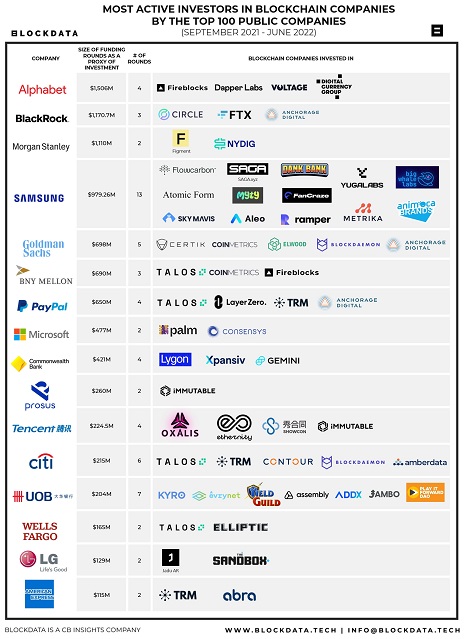 Public companies that are most active in investing in blockchain companies. Source: Blockdata
Samsung was the most active investor during this period, investing $979 million in a total of 13 companies, followed by UOB with seven investments worth a total of $204 million. Financial giant Citigroup invested in six blockchain-related companies, while Goldman Sachs took a stake in five.
Overall, the top 40 publicly traded companies invested a total of $6 billion in 61 blockchain/crypto startups across 71 investment rounds between September 2021 and June 2022.
Notably absent from the above list is MasterCard, which was among the top three active investors based on the number of deals participated in prior to September 2021. Since that time, the company has “mainly conducted incubator and accelerator programs for four blockchain startups,” according to Blockdata, along with acquiring the crypto intelligence company CipherTrace in September 2021 as a way to bolster its cybersecurity solutions.

Areas of interest for investment
There were more than 20 industries and 65 use cases represented by the blockchain startups covered in this report.
Nonfungible token (NFT) solutions were the most prominent, with a total of 19 companies from this sector represented, and many of these projects belonging to the gaming, arts & entertainment, and distributed ledger technology (DLT) fields.
Twelve of the companies are marketplaces, some of which support the buying and selling of NFTs, and 11 of the organizations provide gaming services. According to Blockdata, “There is considerable overlap among use cases for the companies that offer NFT solutions, marketplaces, and gaming.”
“The popularity of NFTs can be mainly seen as an opportunistic move by corporations looking to capitalize on trends to meet where their customers are transacting. The startups raising capital are enabling commerce in decentralized worlds by developing platforms where users can buy and sell NFTs, including virtual land, clothing, and other branded items,” Blockdata said.
Some of the other prominent use cases that are popular investments include blockchain services, infrastructure, development platforms, scaling solutions and custody solutions.
Custody solutions were some of the highest-grossing startups. Fireblocks signed a $550 million deal involving Alphabet, while Circle raised $550 million in an investment round with participation from BlackRock, and Anchorage Digital raised $350 million in a deal that included PayPal and BlackRock.
Samsung demonstrated the most wide-ranging investment strategy, investing in a total of 15 different use cases across some of the most popular sectors, including blockchain services, development platforms, NFT, and social networks.

Interactive Chart
Kitco
Connect
Tools
We appreciate your feedback.
How can we help you? 1 877 775-4826
Drop us a line info@kitco.com

Solana vs. Ethereum: Which Is the Better Investment? – Investor Junkie

What to expect from Apple in 2022: Rugged Watch, iPhone 14 and a MacBook Air redesign – TrustedReviews