3D renders of the upcoming “Apple Watch Pro” shared earlier today accurately depict the design of the device, including a new button on the left side of the case that can likely be programmed by the user, according to Bloomberg‘s Mark Gurman. 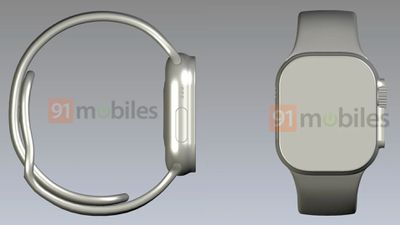 Gurman said users will likely be able to customize the button to launch a specific app, feature, workout type, or so forth when pressed. He also confirmed that while the Apple Watch Pro will have a completely flat display, the device will still have a rounded casing, contrary to some lingering rumors about an Apple Watch with flat edges.

A couple of things I’d point out regarding the Apple Watch Pro design:
– No flat sides. They are rounded like the Series 7.
– The new button on the left side is probably programmable to do whatever you want. For instance, launching a specific app, feature or workout. — Mark Gurman (@markgurman) September 5, 2022

The renders also showed the Pro model with a more protruded Digital Crown and Side Button on the right side of the case, which could make these controls easier to access. Overall, the Pro model looks more rugged than standard Apple Watch models, in line with reports that it is designed for activities like hiking and extreme sports.
A couple of things I’d point out regarding the Apple Watch Pro design:
– No flat sides. They are rounded like the Series 7.
– The new button on the left side is probably programmable to do whatever you want. For instance, launching a specific app, feature or workout. — Mark Gurman (@markgurman) September 5, 2022
This is indeed it https://t.co/ZQj7yDGHVI — Mark Gurman (@markgurman) September 5, 2022
Previous rumors have claimed the Apple Watch Pro will have a larger display with at least a 47mm titanium case, a larger battery, an S8 chip, and more.
Apple is expected to announce the Apple Watch Pro alongside two standard Apple Watch Series 8 models and a second-generation Apple Watch SE at its special event on Wednesday.
Gurman has predicted that pricing for the Pro model could start at $900 or higher. Apple is also expected to announce iPhone 14 models and new AirPods Pro at the event.

How big of an upgrade are Apple’s cheapest mainstream flagship phones?
Apple’s latest Pro phones replace the notch with an innovative “Dynamic Island,” but what else is new compared to last year’s models?
Apple on September 12 released iOS 15.7 and iPadOS 15.7, delivering important fixes for multiple security vulnerabilities, including at least one that has been actively exploited.
Figure out if the 14″ or 16″ MacBook Pro is the one for you.
Apple’s new high-end iPhone models with Dynamic Island camera cutout, A16 chip, 48MP main camera, and more. Pre-orders available now.
Apple’s latest mainstream iPhone models in two sizes with A15 chip, car crash detection, satellite connectivity, and more. Pre-order now ahead of iPhone 14 launch on September 16, iPhone 14 Plus on October 7.
Apple’s latest mainstream Apple Watch with car crash detection and new temperature sensor. Pre-orders available now.
Apple’s lower-cost Apple Watch option lacks a blood oxygen sensor, temperature sensor, and ECG functionality, but otherwise has the same health features as the Series 8. Pre-orders available now.

How Can I Check the Status of My Stimulus Payment? – The New York Times