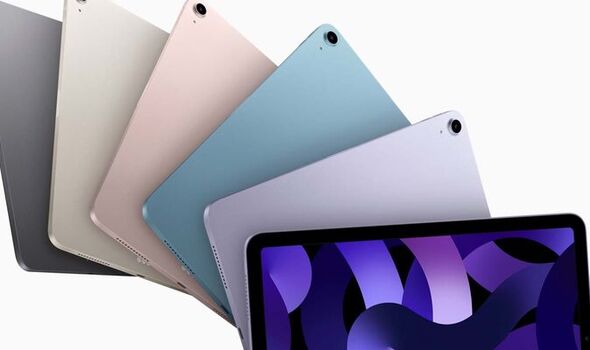 We use your sign-up to provide content in ways you’ve consented to and to improve our understanding of you. This may include adverts from us and 3rd parties based on our understanding. You can unsubscribe at any time. More info
The Apple iPad Air 2022 first hit shelves exactly one month ago, with the latest flagship tablet from the iPhone makers becoming available to buy on March 18. But already this flagship device has received a big – and surprising – price cut. The iPad Air 2022 line starts from £569, but John Lewis is offering a whopping £70 on the 64GB blue model.
The iPad Air has only been out for a matter of weeks, but already it’s got a price cut. The latest and greatest tablet from Apple usually has a started price of £569. But right now you can get the blue iPad Air from John Lewis for £499 – a £70 saving on the 2022 tablet
This tablet can be picked up for £499 from the John Lewis website.
It’s rare to find such a big price cut on an Apple product so early on in its lifecycle, so if you’ve been thinking of picking up an iPad Air since it launched last month then now is the perfect time to do so.
John Lewis will also offer an additional saving of up to £150 when you trade in an old iPad, which will make the 2022 tablet even more affordable.

The iconic British high-street retailer will also throw in a two year guarantee – which is one year longer than the standard guarantee Apple offers with new products.
And, as an added bonus, John Lewis will also give anyone that purchases a 2022 iPad three months worth of access to Apple TV+ entirely for free.
If you’ve never subscribed to the Apple streaming service before then you’ll have plenty to watch on your shiny new iPad, including award-winning comedy Ted Lasso as well as Coda – the first film released by a streaming service to ever scoop the Academy Award for Best Picture.

The 2022 iPad Air offers plenty of improvements over its predecessor, thanks to the latest M1 chip – the silicon that’s fitted with some of the most popular MacBooks.
This chip means the 2022 iPad Air boasts a whopping 60 percent faster CPU performance than its predecessor along with twice faster graphics performance.
The 2022 iPad Air also comes fitted with 5G support for the first time as well as an improved front-facing camera.
Speaking about the new iPad Air range Greg Joswiak, Apple’s senior vice president of worldwide marketing, said: “Whether it’s a college student taking elaborate notes, a content creator working on their latest project, or a gamer playing graphics-intensive titles, users love iPad Air for its amazing performance and versatility in such a portable design.
“With the breakthrough M1 chip, Ultra Wide front camera with Centre Stage, and ultra-fast 5G, iPad Air is now more powerful, more capable, and simply more fun than ever.”

The iPad Air has only been out for a matter of weeks, but already it’s got a price cut. The latest and greatest tablet from Apple usually has a started price of £569. But right now you can get the blue iPad Air from John Lewis for £499 – a £70 saving on the 2022 tablet
See today’s front and back pages, download the newspaper, order back issues and use the historic Daily Express newspaper archive.

Where to Watch and Stream Default Free Online – EpicStream