MixRadio goes cross-platform with its Android and iOS apps, coming to HTC BlinkFeed

MixRadio, earlier available exclusively for Windows Phone, is finally available on iOS and Android. Launched back in 1999, MixRadio is the brainchild of British artist Peter Gabriel, who founded the service as OD2, was only available on Windows until now. The announcement was made at a media event in New York, where the service’s artist ambassadors Nile Rodgers and Charli XCX took the center stage.

MixRadio is an Internet radio service previously owned by Microsoft, but was acquired last year in December by messaging service LINE for an undisclosed amount. Currently available in 32 countries, MixRadio is free to use, and monetizes via ad-supported radio that allows users to create and organize playlists from a licensed catalog of 35 million tracks., along with over 10,000 pre-made playlists.

MixRadio’s Chief Operating Officer, Mike Bebel says that the U.S, UK and Brazil markets are primarily their focus for now, along with India, Singapore and Indonesia also among the service’s top markets.

“We have millions of users across our current footprint on Windows phones that have been delivering positive feedback throughout our evolution. And we’ve taken in millions of datapoints from that user base, and are now leveraging those to extend that wonderful experience to iOS and Android”, adds Bebel. 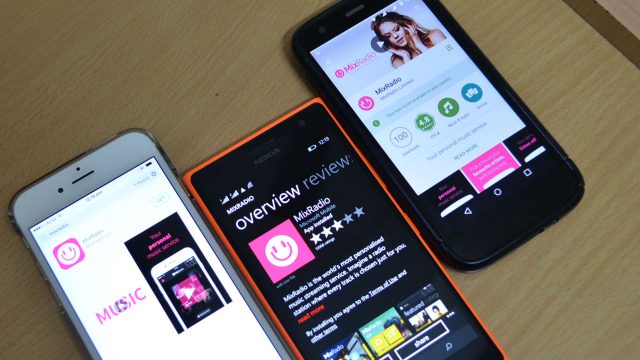 The company says its still committed to Windows Phone platform and will continue to serve ‘millions’ of monthly active users on Lumia devices. And now launching it on Android and iOS will further bolster its user base.

“I’ve said consistently that for a music service to be relevant, it must be on all major platforms,” MixRadio CEO Jyrki Rosenberg said in an interview. “We still consider Windows Phone to be an important platform — particularly given our deal to pre-load the app on Lumia devices.”

In the past, the company has teamed up with prominent artists like Green Day for album premiers to stay competitive in the ever crowded U.S market, and the company plans to adopt the same approach from artists around the globe.

“We want to work with all artists around and the world, and in many cases, people don’t really know they love an artist until they have an opportunity to discover and experience them. That’s a big part of what we do. We want to help artists bring the music they’re producing out to the world,” said Bebel.

The Microsoft Surface Duo is now selling for a huge discount