Microsoft seems to be working on a lightweight chat app to allow swift email conversations among users. Dubbed as the ‘Flow’, notably the app will initially be launched on the iOS, though there’s no official word from Microsoft. The app is supposed to work in sync with Outlook; that’ll enable faster email conversations in real time. The news was initially spotted by a Twitter user @h0x0d, on a download page for the new app called ‘ Microsoft Confidential’.

The web page describes ‘Flow’ as an app that will allow “rapid email conversations on your phone with the people who are important to you.” Essentially designed for rapid one-on-one communication. The web page further mentions that the app will not include the subject header, greetings, gestures or signatures. Moreover, chats that happen on the app do end up in your inbox for future reference. Users will be able to use Flow and Outlook “interchangeably to participate in the same conversations”. 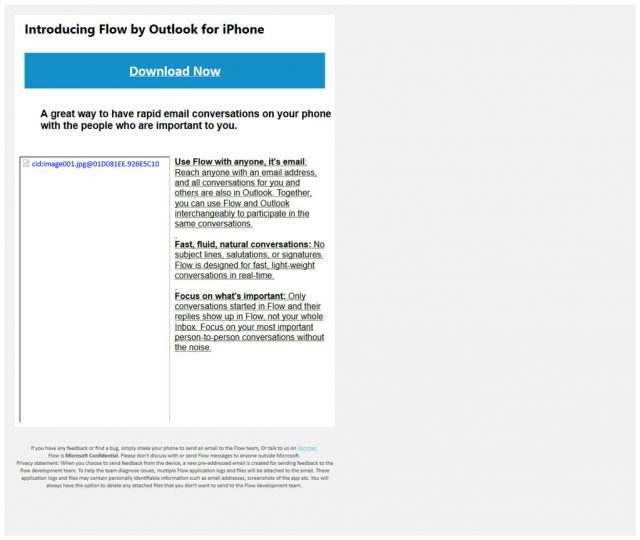 Essentially, Flow integrates with Outlook in the same way Qik does with Skype, notes ZDNet. Skype Qik is a video chat app made available by Microsoft last year for Android, iPhone and Windows Phone, that requires only a phone number from users for instant communication. Notably created to be “as lightweight and convenient as SMS and IM”, said Microsoft.

As already mentioned, the new app is coming on the iPhone for sure, though at this point, it is unclear whether it’ll be available on other platforms.

Microsoft has declined to make any comments and isn’t sharing any information about Flow, though Neowin did manage to get a few screenshots for the app. Implying that Flow definitely exists, though when will it be made available still remains a mystery.

Hence, Flow can be described as a rather basic chat app, that relies on email and other infrastructure to initiate conversations.

It’ll be interesting to see how Flow eventually turns out, especially in a time where we have Instant Messaging apps that are continuously evolving and adding new features for users. The USP with Flow would be to speed up the whole process of communication among users and reduce friction.

For now, the app is still in its testing phase, and there is no word as to when it’ll be made available publicly or its release on other platforms. We’ll keep you updated as soon as we learn more.

April 1, 2021
There are no comments yet No comments