Reports of Apple accidentally putting up an image of its upcoming device, the iPhone 6c have been debunked, according to 9to5 Mac, citing sources close to the company. The image that appeared on Apple’s official website, believed to be the next iPhone 6c, was in fact ‘just an incorrect render’. Earlier the Cupertino giant had posted images advertising its new iPhone lightning dock that is used to charge iPhone 5 and its successors. The image had the iPhone 5S, 6, the 6 Plus, along with a mysterious pink iPhone 5c featuring a Touch ID button, instead of the usual home button.

This eventually ended up in a lot of speculation that might Apple have leaked its upcoming device on its official website, with several websites reporting that this might be the first look at the alleged iPhone 6c, though it has been confirmed it’s not. Apple has since replaced the image and rectified the incorrect render with an actual iPhone 5c, which further confirms that the image posted earlier was indeed an incorrect render.

In addition, reports that Apple might push the launch of the upcoming iPhone from fall to August have also been discarded, confirms 9to5 Mac. 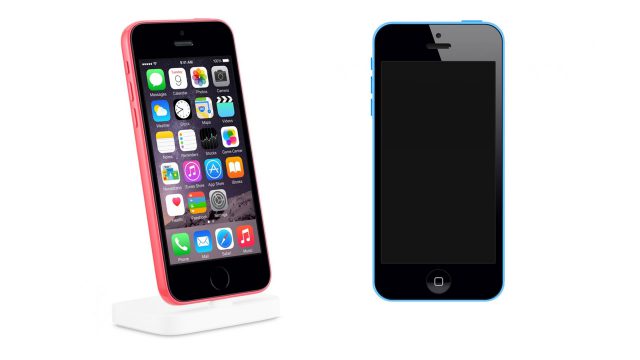 Earlier there were reports Apple might also be launching a smaller 4-inch iPhone, citing sources from an Asian manufacturer. Though it seems even these rumors have turned out to be false, according to KGI Securities analyst Ming-Chi Kuo who has a good track record with his predictions. He notes that these rumors are apparently false, and the company would rather stick to the 4.7 and 5.5 inches models this year, which in a way makes sense because users are these days do not prefer screen sizes 5 inches or less.

Though what we can expect on the 2015 iPhone is the addition of a new pink color and the company might also use the 7000 series aluminum found on the latest Apple Watch. The new material is apparently 60 percent stronger than standard aluminum and lightweight at the same time.

We can see upgrades to features like Siri, Touch ID, overhauled processor along with major camera improvements in the upcoming ‘S’ series of iPhones. According to reports, the next-gen iPhone will get faster A9 processors, 2GB of RAM, a 12-megapixel camera and potentially a more robust design to address the bedgate issues with its predecessor.

Moreover, we can also see the Forch Touch feature to be introduced in the upcoming iPhone, allow more responsive pressure sensitivity and faster Touch ID fingerprint recognition. We might also see the use of sapphire on a limited number of the next iPhone 6s Plus, according to analyst Ming-Chi Kuo, though only “if drop test issues can be resolved.”

Apple is expected to launch these next-gen iPhones in fall this year.