A recently published study has revealed one of the most unique birds to ever exist here on Earth, thanks to qualities in its tail that simply hadn’t been seen before. The team discovered a fossil of a bird from Mesozoic of Gondwana, which had unique qualities any scientist or researcher had seen to that point. Interestingly though, the scientists pointed out that there was a ribbon-like tail protruding from the rear of the bird, which proved to be that defining feature that had scientists buzzing.

The bird itself is around 115 million years old. The fossilized remains were likely from the Early Cretaceous period, the researchers found. Richard Prum, of Yale, who wasn’t involved with the study pointed out that, “These are weird feathers that occur in extinct birds.” He went on to point out that, “But they’re on a separate line. They have nothing to do with modern feathers. It’s fascinating.” 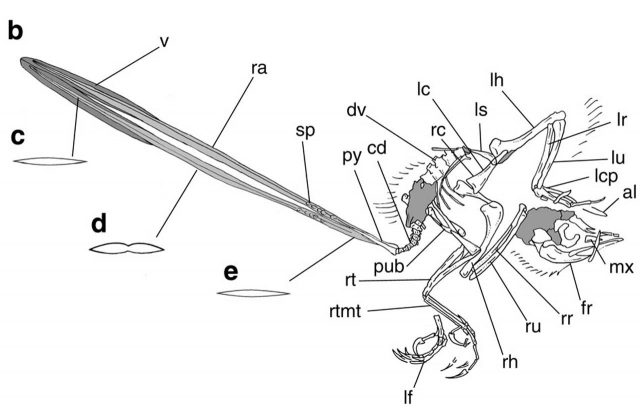 Ismar de Souza Carvalho, the lead author of the study pointed out that, “We are still comparing it with some birds that came from other parts of Gondwana to decide, exactly, the name that it will have.” At this point, it’s unclear what the bird will be named when push comes to shove. The findings are unique with this bird because it was one that was almost exclusively found in the Northern Hemisphere. While scientists can’t be sure of that fact, they are reasonably sure that this is a bird that wouldn’t have been found in the southern hemisphere.

One of the most-interesting portions of the findings include that the bird was so well preserved. The researchers involved with the team, as well as researchers from outside the specific space of the research marveled at the level at which the bird was preserved. The fossil was located in Brazil’s Araripe Basin, which has already yielded a ton of worthy fossils. Some insects have been found, reptiles, some creatures that flew, and others that did not. Now, this bird has been added to the list of awesome things that the sedimentary site has yielded.

Lynn Schindler - May 27, 2022
LifeYou know, for posterity.It’s been said that it goes down in the DMs, but Instagram stories are where a lot of action happens, too....