Imagine encountering a shark that is the size of a two story building. Compared to a human, that creature would easily dwarf our puny build. However, while that might sound like fiction today, researchers have found a massive shark that could have been found patrolling the waters where modern day Texas sits, as they located fossilized remains near Fort Worth Texas. The research is interesting for a number of reasons, but perhaps most interestingly, this pushes back dates when scientists had originally believed that sharks would have evolved into the predatory monsters that they are today in our oceans.

Joseph Frederickson, the co-author of the study and a doctoral candidate at the University of Oklahoma played a vital role in locating this rare fossil. Frederickson was only an undergrad student at the University of Wisconsin-Milwaukee when he located this interesting species in a paleontology club that he had started himself. While the expectations were low on that original trip to the Fort Worth area, he would eventually find some of the most interesting stuff that has ever been discovered in science to date.

The Duck Creek Formation was the specific location for the find, and Frederickson said of the vertebrae he found that “You can hold one in your hand,” but that would be about all that would fit in your hand. The co-author of this study wasn’t the only person eager to chat about the findings. 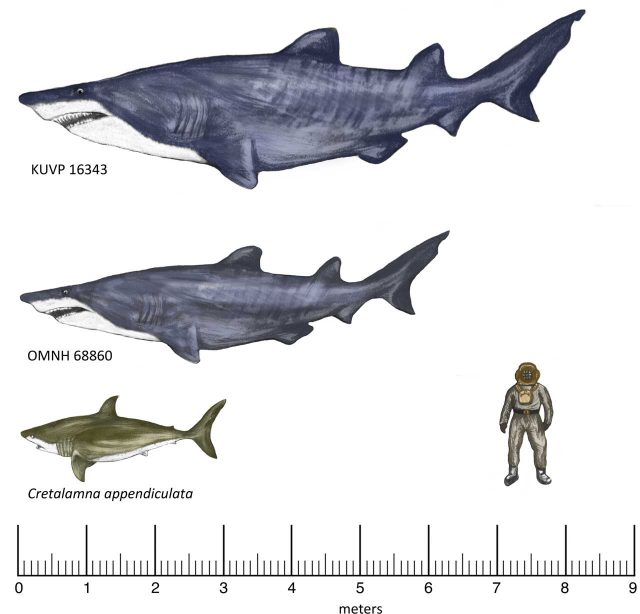 Kenshu Shimada, of DePaul University, pointed out that, “It is also entirely possible that they may belong to an extinct shark with very small teeth so far not recognized in the present fossil record.” Shimada elaborated by pointing out that, “For example, some of the largest modern-day sharks are plankton-feeding forms with minute teeth, such as the whale shark, basking shark, and megamouth shark.”

This research is interesting given that it is such a large shark. It completely changes the way people perceive the sharks that have been found to date and does something significant to the entire timeline of events that have taken place from an evolution standpoint. Things that scientists and researchers had previously believed, simply could be up for debate now that there is a better idea of what is going on in terms of the origins.

Before this lizards were thought to be the king of the hill. They were thought to be the largest predatory creatures on the planet at the time. However, that isn’t the case now that this whale of a shark has been found. This eclipses what scientists and researchers previously would have called the gold standard of size and mass.