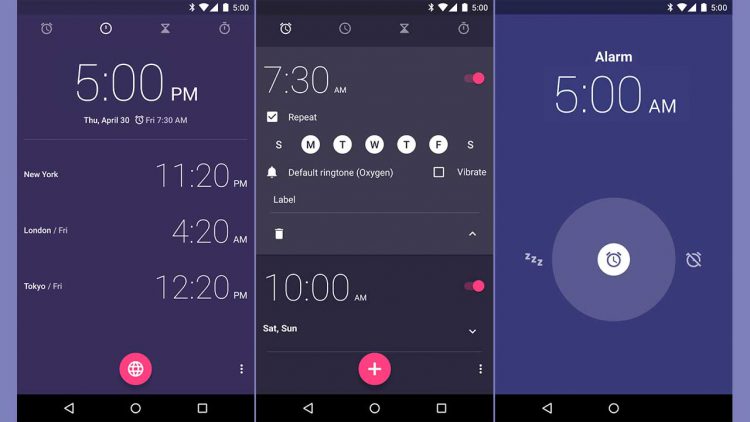 Google on Thursday rolled out its stock Android Clock app on the PlayStore, essentially aimed at giving non-stock Android users that core Android experience on their devices. Its the same app version 4.0.1 found in the Android M developer preview, which takes only 6.6MB of memory space and will be available on devices running Android 4.4 and above.

The app has received a rather positive response, owing to its aesthetically pleasing minimalist design coupled with those vibrant color tones, capturing the essence of Google’s ‘material design’ philosophy. It has neat layout with basic features such as stopwatch, alarm along with a World Clock . The Clock App is also integrated with Google Now, hence users can give voice commands to set an alarm.

Though shortly after the apps release, a lot of users have been complaining as they were experiencing issues with app. Google is likely to rectify the situation in the weeks to come, as it happens more than often than not that a newly launched app is quite often riddled with minor technical issues.

The Mountain View giant has been trying to give that Nexus experience for quite some time now, making its standalone apps available for free on the PlayStore including its Camera app, Maps, Messenger, Calender and more. Along with the above, the search engine giant also rolled out its standalone Google Now Launcher on PlayStore, which essentially puts the handy digital assistant with ‘OK Google’ voice controls on any device, irrespective of the manufacturer.

While other manufacturers have been adding their own custom layer over Google’s stock Android to push their own offerings and services, the Mountain View company is trying to make the Android experience as it intended to be. Take for instance Samsung’s Touch Wiz or Xperia UI found on Sony smartphones, that come bloated with their custom flavors. Google’s idea behind making these standalone apps available is to adopt company’s own vision of Android for users. In addition, this also implies that the company can offer the stock experience without having to rely on the next version of Android to push major updates.

Notably, Google is also fragmenting its core services into individual apps. For instance, Google Drive now has features for editing documents and sheets, giving users direct access to create a separate spreadsheet or edit a document without having to exclusively launch Google Drive and navigate through its menus.

There’s no denying the fact that the amount of customization that Android offers is what makes it so appealing to manufacturers. And it seems Google intends to offer the same freedom to users, even if they buy a device from Samsung or HTC.