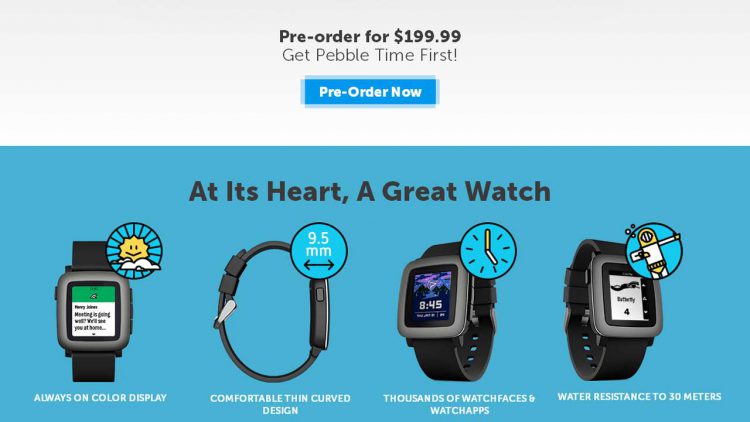 Pebble Time is here. Well, not quite officially, but the device is now available for preorder. That is more than what consumers have had the opportunity to take advantage of though, and now they will be pushing to move as many as they can at Pebble.com, as well as Best Buy. The starting price for this wearable piece of technology sits at just $199, which might seem pricy for some, but when compared to the Apple Watch, or some Android options – the wearable really lands as affordable.

The company says that shipments will begin in July, which is just in time for the summer rush of excitement. Pebble started out as a Kickstarter phenomenon that launched itself into the stratosphere with record excitement and backing. However, the next edition to the Pebble family looks to be bringing some impressive features and qualities, according to what the company has laid out to this point.

Pebble Time is bringing an entirely new operating system to its users. That is probably the most exciting portion of the new release, given that the device itself isn’t that much of an upgrade. While the display is better, and some of the specifications are improved – and we’ll get to that shortly – the big story here is that Pebble is bringing a seriously improved operating system into the fold.

The new operating system works in reverse chronological order, which is significant, according to the wearable experts. It stores events, manages movement, and handles the full gauntlet of any smart device – while functioning perfectly in chorus with the latest iOS or Android operating system. It comes packed with some impressive apps and function, in terms of what it can handle, and the price is equally impressive.

When it comes to actual specifications, the Pebble Time includes a 7-day battery life, water resistance up to 30 meters, and a built-in microphone. Additionally, it’s built with a stainless steel bezel, as well as a rigid 2.5D glass display. The buttons function easily, and the device features a magnetic charging cable, which will remind many users of the MacBook design. The device will even wake you up with a vibration.

For what the consumer gets – $199 is an incredibly affordable price to start. The screen on this device though is also a significant improvement over the previous models, which didn’t include the quality backlit screen. This piece of technology delivers, and it will be interesting to see how preorders perform for Pebble. This is a company that has high expectations for its launch and has high expectations in the business world – given how popular the devices had become on their Kickstarter campaign.

For $199 this is the ideal device for anyone that is halfway through the smartwatch progression. It’s slightly more expensive than the introductory level devices but falls seriously beneath the expensive top-tier devices.