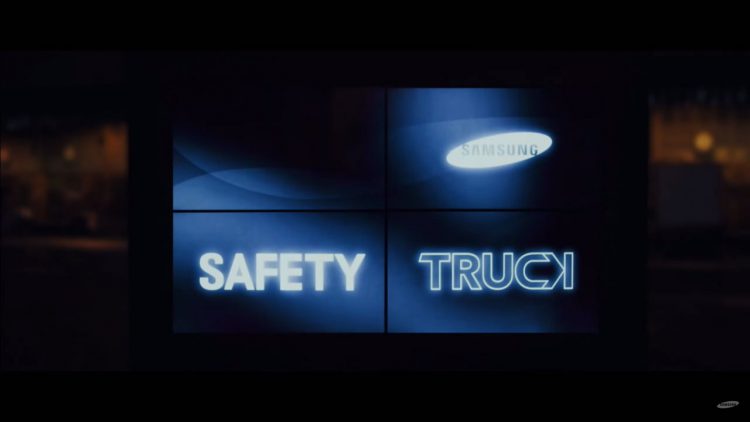 Cars getting stuck behind slow gigantic trucks is a pretty common sight, as its quite a hassle and at the same time a risky prospect to overtake these super-sized vehicles, especially on narrow to lane roads. To address this concern, Samsung might have come up with a solution. As the Korean giant has unveiled a new ‘transparent truck’, essentially aimed at making roads safer for other drivers on the road. The new prototype has a wireless camera mounted on its front, which displays what’s ahead onto a screen housed on the back of the truck.

“Argentina’s statistics on traffic accidents are among the highest in the world, with most of these accidents occurring on two-lane roads and particularly in situations of overtaking. With this in mind, Samsung developed a technology for trucks that seeks to enrich the lives of people through innovation. But more than that, this time the goal is more ambitious: to save lives,” Samsung wrote in a blog post.

The camera on the front live streams onto the four monitors housed on the back of the truck, which gives other motorists behind an exact view of what lies ahead. This would eventually give other drivers on the road a better view of the road, especially on a narrow two-lane road. Samsung says this would allow them to see any obstacles on the road, preventing the need for sudden acceleration and braking.

“Another advantage of the Safety Truck is that it may reduce the risk of accidents caused by sudden braking or animals crossing the road,” adds Samsung.

In addition, the camera mounted on the front has night vision capabilities, making it functional in low light and dark conditions as well.

Samsung further added that the prototype truck has been tested in Argentina owing to its two-lane roads. According to Samsung’s promo video, there’s at least one death per hour on roads in Argentina. This new technology would definitely find use in developing countries where there are mostly two-lane roads, though how handy it comes on multi-lane highways remains to be seen.

The truck is still a prototype, though Samsung says it has joined hands with government and private safety agencies to develop this technology further.

“How are you?”, “Thank you” and “I love you” are the most popular phrases in Google Translate