Samsung has revealed its budget tablet, the Galaxy Tab A8 which now comes with a slightly larger 10.5-inch display having a 16:10 aspect ratio. Strangely, Samsung isn’t revealing the make of the chipset but has said there will be a 10 percent boost in CPU and GPU performance. Plus, there is going to be a new high-end model having 4 GB RAM and 128 GB of storage which would be sitting above the models with 3 GB RAM and 32 GB storage and 4 GB RAM and 64 GB of storage. The tablet would be running Android 11 and comes with a 5 MP front and 8 MP rear cam.

From the information available so far, the Galaxy Tab A8 will go on sale in Europe later this month and has been priced at €230. That happens to be almost the same as it was last year. Samsung said the tablet will be on sale in other regions including the US from January onwards. Color options the tablet will come in include Gray, Silver, and a new shade of Pink Gold.

The Galaxy Tab A8 comes with a 10.5-inch LCD display having a resolution of 1,920 x 1,200 pixels and a 16:10 aspect ratio. This makes for a slightly more vertical room this time compared to the Tab A7 which offers a 10.4-inch display and a 15:9 aspect ratio. The tablet supports the Drag & Split feature from One UI 3.1.1 which Samsung had introduced to its 2020 Galaxy flagship devices earlier. This also points to the tablet coming pre-installed with Android 11. 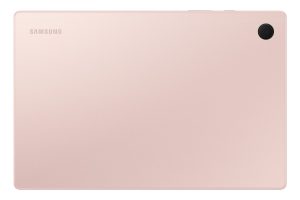 While Samsung is yet to reveal the name of the processor that would be powering the Tab A8, unofficial sources claim it likely is the Unisoc Tiger T618, which happens to be a 12 nm chipset having twin Cortex-A75 cores and six A55 cores along with a Mali G52 MP2 GPU. For reference, the Tab A7 came with an 11nm Snapdragon 662 chipset having four Cortex-A73 cores and four A53 based cores along with Adreno 610 GPU.

Memory and storage configuration includes 3 GB of RAM and 32 GB of storage for the base model. THe there is the intermediate model with 4 GB of RAM + 64 GB storage while on the top lies the 4 GB RAM + 128 GB storage model. Plus, there is also the option to add another 1 T via microSD cards.

While endowing it with features that make the Tab A8 well suited for work, there is enough bits built-in that make the tablet great for some wholesome entertainment. Those include Samsung TV Plus feature built-in that offers streaming of more than 200 channels along with two months of free subscription to YouTube Premium. The tablet meanwhile retains the quad Dolby Atmos speakers from its predecessor and offers a great audio experience.

For optics, there is going to be an 8 MP camera with autofocus at the rear along with a 5 MP fixed focus camera at the front. The tablet measures just 6.9 mm in thickness and weighs 508 grams. Power comes from a 7,040mAh battery that is backed by a 15W fast charger.

The tablet will come in two versions – 4G LTE and Wi-Fi only. Connectivity options include Bluetooth 5 and Wi-Fi 5. There is a USB-C 2.0 port along with a 3.5 mm headphone jack as well.  Sensors on board include an accelerometer, compass, gyro, light sensor, and a hall sensor.