A new app by the name ‘CoverScreen OS’ aims to do what Samsung couldn’t or didn’t bother doing with the Galaxy Z Flip 3, introducing more functionality to the foldable phone’s cover screen. This makes for a significant enhancement considering that otherwise, it would require opening the display each time there is a notification received. Nothing bad with that given the brilliant display you are greeted with as well as the manner the display folds and unfolds neatly. However, this can be cumbersome at times, more so when there does exist an external display that can show notifications perfectly well.

Now, the CoverScreen OS application does exactly that, or perhaps more. It brings to life the external display in that you can now post replies and show not only more widgets but complete apps as well. The app is currently available on the Play Store as well though it’s still far from being complete and ready. What that means is there still are a few grey areas with the app which the developers surely are working on right now. Early users have already posted on the review section the shortcomings they have faced, which should provide the developers early leads on where to start for improving the app’s functionality. However, when ready, it should make the external display achieve its full potential. 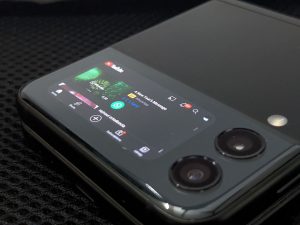 Also, a good thing about the app is that it does not require any special privileges such as root access for its operation. Rather, the developers are only asking users to connect their Google account along with the requisite accessibility permissions to run on top of other apps. Plus, the app will also require access to other app’s notifications as well.

The app meanwhile is available for free though extra features such as the ability to organize the app drawer require paying a monthly subscription fee of $10 or a one-time fee of $99. The free version should be great too when it is ready though that would entail surviving a continuous stream of ads. That makes for a slight disadvantage if it can be so said, for an otherwise great idea that seeks to make the most of the external display. It would have been great if Samsung did it in the first place though as long as that isn’t the reality, there is solace in that there is the CoverScreen OS app that we can always fall back on.

Abhinav Mishra - May 17, 2022
Amazon is increasing the price of its Unlimited Music subscription for Prime members, the company announced on its website. The Amazon Music Unlimited plan...

Google Assistant Will Soon be Available for the Galaxy Watch 4...