Windows Boot device not found? Here's how to fix it... - OnMSFT.com

US: Tesla Increased Prices Of Base Versions Of All Models - InsideEVs

Tesla has enabled drivers and owners to purchase upgrades for their vehicles in their cars with the rollout of Software Update 2021.40.6.
Upgrades for Tesla have been available for years in many different forms. Everything from Premium Connectivity, which gives drivers features like Navigation, Life Traffic Visualization, Video Streaming, and an Internet Browser among other features, and performance improvements, like Acceleration Boost or Full Self-Driving, have been available for purchase through the Tesla Smartphone App for some time.
Prior to the Smartphone app, Tesla owners would have to purchase these updates directly from their account on Tesla’s website, which was somewhat of a pain for many. The convenience of having the Smartphone app was great, but now Tesla is taking the accessibility a step further by letting owners buy these upgrades directly from their vehicle’s center dash screen.
The update was included with Software Version 2021.40.6, which has been rolling out to vehicles for a little over a week, according to TeslaScope.com, a site that tracks the deployment of Tesla Software Updates. The past few days have been the most heavily concentrated rollout of the Software Update.
The addition of the Upgrades Menu in the Tesla Settings screen was noticed first by Reddit u/sageDieu, who posted a photograph of the Upgrades menu late last night. 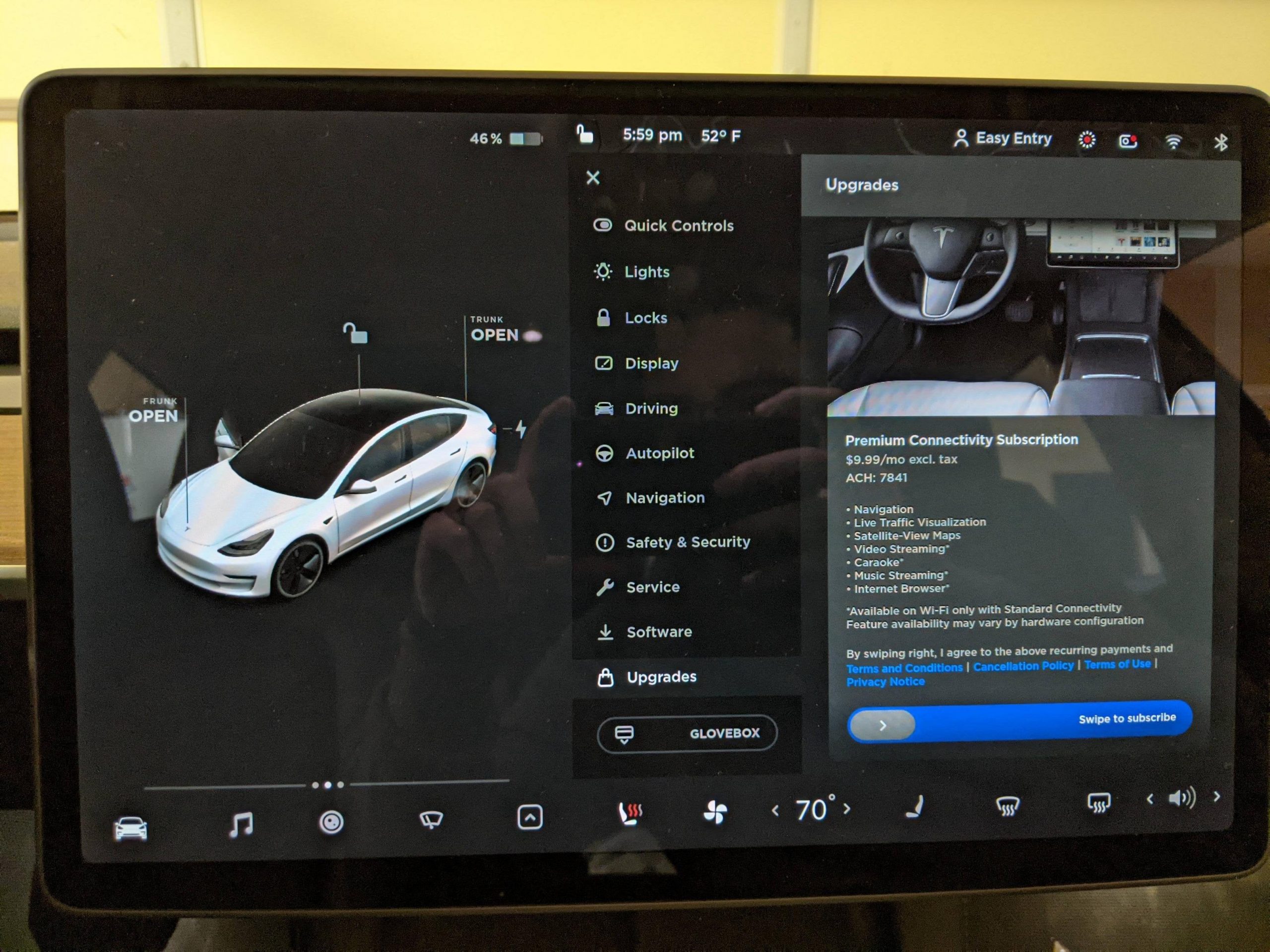 Credit: u/sageDieu | r/TeslaMotors
Perhaps one of the biggest advantages of the in-car purchase option is the fact that mistaken or accidental purchases can basically be eliminated with this update. Many Tesla owners with the Smartphone App installed on their phones have complained of being charged for upgrades they did not purchase. Instead, Full Self-Driving and Tesla’s Acceleration Boost both were the subjects of accidental purchases in the news earlier this year and late last year. Tesla created a refund program for these instances.
Tesla’s 2021.40.6 Software Update also added Waypoints, TIDAL music streaming, Active Road Noise Reduction, Cold Weather Improvements, Rear Display Improvements, Language Support, Traffic-Aware Cruise Control Chime improvements, Range Display improvements, Side Repeater Camera improvements, and Navigation fixes, NotATeslaApp stated.
I’d love to hear from you! If you have any comments, concerns, or questions, please email me at [email protected]. You can also reach me on Twitter @KlenderJoey, or if you have news tips, you can email us at [email protected].
Video of a Tesla crashing into a $2 million Cirrus Vision jet at an…
Tesla moved closer to the S&P Global’s “Investment Grade” rating after reporting a strong…
Elon Musk declined a meeting to discuss climate change philanthropy with Bill Gates because…
The Twitter board met on Sunday, April 24, to discuss Elon Musk’s $46.5 billion…
The Boring Company (TBC) announced that it raised $675 million in a Series C…
Copyright © TESLARATI. All rights reserved.

After backlash, Star Trek: Discovery now available around the world – Winter is Coming