In the first quarter of this year, there was no boom in sales in the smartphone market. According to reputable analysts from the International Data Corporation (IDC), users were reluctant to purchase mobile devices and their sales sank 8.9% compared to the same period last year.
According to the results of the first three months of this year, 314.1 million units were delivered to the market. Whereas from January to March last year, this figure was 344.7 million units. Among the reasons for the decline, analysts cite problems in logistics; a shortage of components, an unstable economic and geopolitical situation. It is predictable that the demand for smartphones sank the most in Central and Eastern Europe, the fall was an impressive 20%.
“Although some decline was expected in Q1, due to the ongoing supply and logistical challenges and a difficult year-over-year comparison, things seemed to have taken a turn for the worse,” said Nabila Popal research director at IDC. “Consumer sentiment across all regions, and especially China, is broadly negative with heavy concerns around inflation and economic instability that have dampened consumer spending. This alongside the rising costs of components and transportation and the recent lockdowns in Shanghai; which are exacerbating an already difficult situation. On top of all this is the Russian invasion of Ukraine; which immediately impacted that region and continues on an unknown trajectory. Given all these uncertainties, most OEMs are adopting a more conservative growth strategy for 2022.” 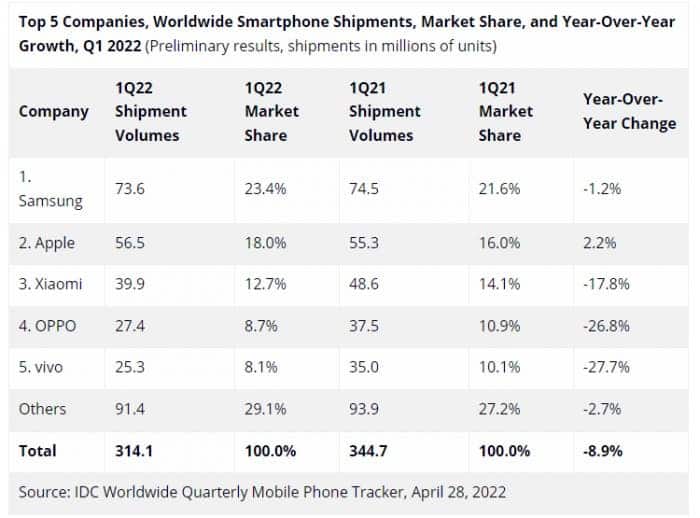 If we talk about the alignment of forces, then Samsung continues to be the undisputed leader and controls 23.4% of the market in the first quarter of this year. In quantitative terms, this is 73.6 million smartphones. The second line belongs to Apple with a result of 56.5 million shipped iPhones and a share of 18%. Rounding out the top three is Xiaomi, whose market share is estimated at 12.7% and has 39.9 million delivered smartphones. 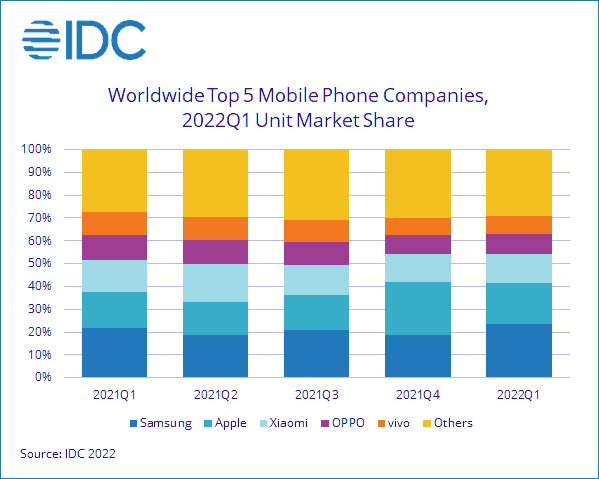 We expect to see Oppo and Vivo in fourth and fifth places; which accounted for 8.7% and 8.1% of the global smartphone market. Also, it is worth noting that only Apple was able to increase the supply of mobile devices; while they sank for other major market players.
“It goes without saying that the world continues to face numerous challenges, whether it be geopolitical, pandemic related, or macroeconomic,” said Ryan Reith, group vice president with IDC’s Worldwide Mobile Device Trackers. “Almost everything that’s happen in recent months has been a headwind on the smartphone market, and realistically many other technology segments. Our research tells us Samsung and Apple have navigated the supply chain situation a bit better than their competitors; and as a result we have seen reduced orders from the next set of top OEMs. We remain of the opinion that any diminished demand will not be lost, but rather pushed forward. It’s just a matter of when that demand resumes.”
Tech blogger, fan of technology, entrepreneurship, and music.

Does the Apple Watch Have a Camera? – Techstory