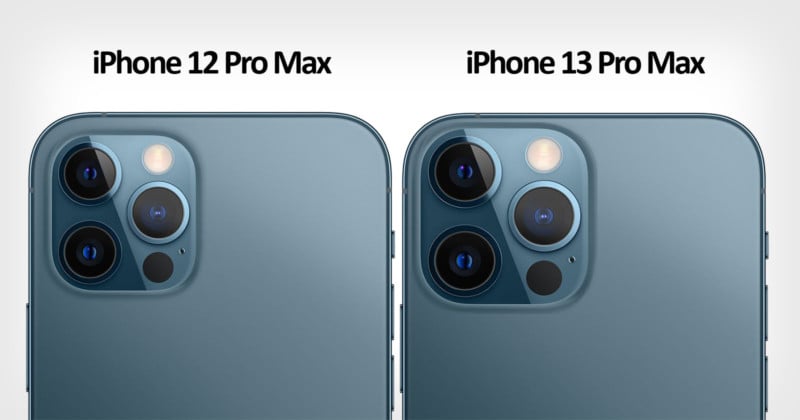 Apple looks set to beef up the iPhone camera in various ways over the next couple of years. New leaks are revealing plans for an even larger camera module on the back and a massive 48MP image sensor within.

EverythingApplePro has published what it claims are leaked CADs for the upcoming iPhone 13 that should be released later this year.
Here are illustrations comparing the dimensions of the iPhone 13 Pro Max camera module compared to the current iPhone 12 Pro Max module:
If the leaked CADs are accurate, the square module may protrude 31% more (3.65mm vs 2.78mm), causing the thickness of the phone to be 3.33% more (7.65mm vs 7.40mm). The module will reportedly be 3.38mm taller and 4.77mm wider.
The camera module of the ‌iPhone 12 Pro Max‌ will be 15% wider and 9.9% taller.
The iPhone 13 Pro camera module will reportedly have an even larger size increase in width and height and a similar increase in protrusion. The noticeably larger module will include a larger LiDAR sensor for better accuracy for corners, edges, and AR, MacRumors reports.
Here’s the full 10.5-minute report by EverythingApplePro:

In a note to investors that was seen by MacRumors, well-respected Apple analyst Ming-Chi Kuo wrote that the “iPhone 14” to be released in 2022 will feature a 48-megapixel camera to take iPhone photography “to a new level.”
In terms of pixel size, the ‌iPhone 12‌, iPhone 13, and new 2H22 ‌iPhone‌ are about 1.7um, 2um, and 1.25um, respectively. We believe that the new 2H22 ‌iPhone‌ may support direct 48MP output and 12MP (four cells merge output mode) output simultaneously. With 12MP output, the CIS pixel size of the new 2H22 ‌iPhone‌ increases to about 2.5um, which is significantly larger than the ‌iPhone 12‌ and ‌iPhone 13‌, and larger than existing Android phones, and close to the DSC level. We believe that the camera quality of the new 2H22 ‌iPhone‌ will elevate mobile phone camera photography to a new level.
Kuo also notes that the high-end iPhone will be able to shoot 8K video. Looking further, Kuo believes Apple will begin using a periscope telephoto lens in 2023 (something the company patented years ago and which competitors have already launched).
© 2022 PetaPixel