Apple News+ is offering new subscribers an extended three-month free trial of its service through Cyber Monday, an increase from the normal one-month trial offered to new subscribers, the service announced on Apple’s website and on Twitter. 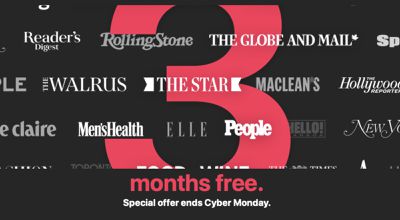 The new offer will only be offered to new subscribers in locations where ‌Apple News‌+ is available and will run until Cyber Monday, November 29. Apple ran a similar promotion last year. Once the trial ends, the subscription will automatically renew at $9.99 per month.

Disney says Florida would have to pay nearly $1 billion to...

Alphabet just spun out out its quantum tech group, launching it...

What comes after the crypto crash? A powerful Web3 firm expects...