Google Chrome supports media keys on some operating systems; this enables users to press hardware media keys, usually on the device’s keyboard, to control media playback in the Chrome browser. 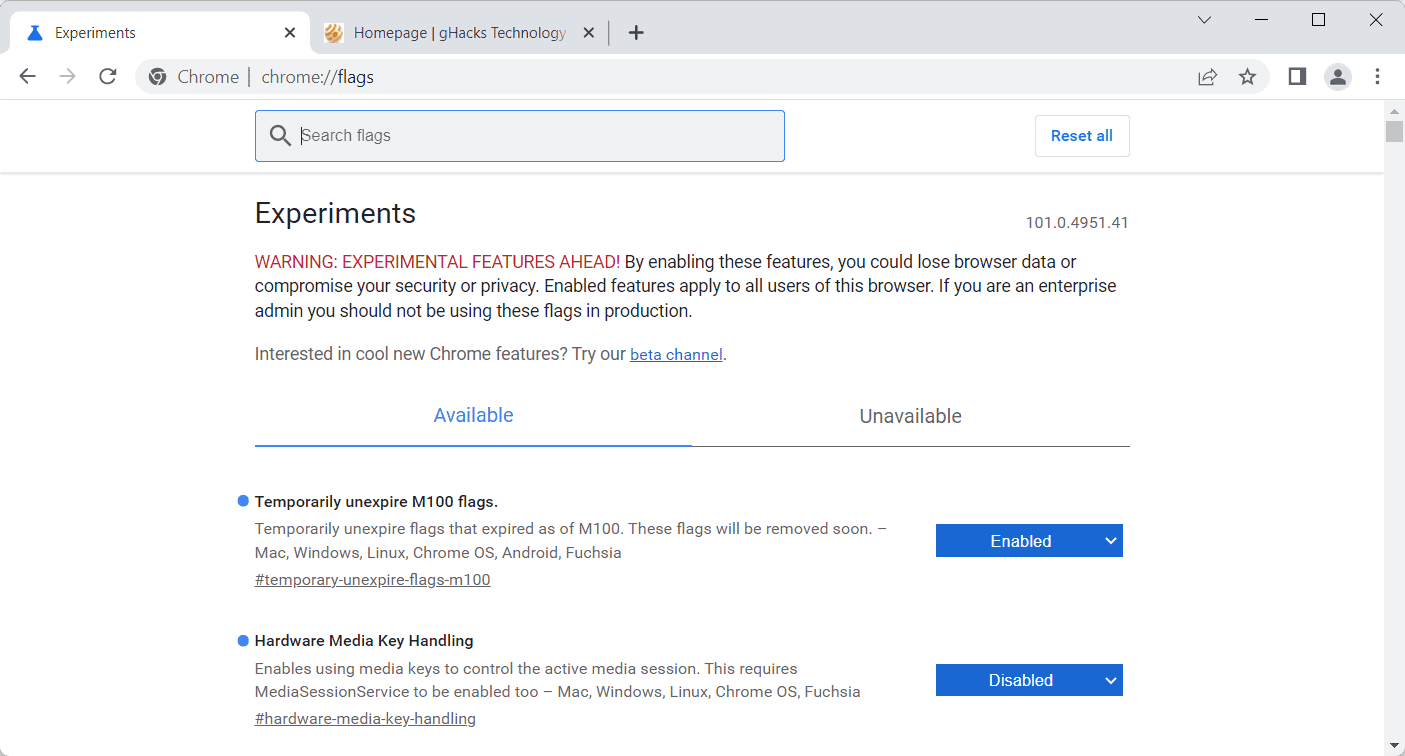 Chrome users who did not want this could disable the functionality via a flag in the browser. Flags are experimental features that may be integrated in Chrome at a later point or removed without leaving an alternative behind.
In Chrome 101, users noticed that Google removed the hardware media key handling flag from the experimental page without adding an option to Chrome. Did Google pull the flag and decide to do away with the option?
It appears that this is not the case.  According to this commit on the Chromium Gerrit site, Google plans to restore the flag in Chrome 102, out next month and extend the expiration date of the flag to Chrome 113.
Google notes in the commit that the experimental flag is popular, as it is the 10th most used custom flag in the browser.
Extend hardware-media-key-handling flag expiration
This flag is still the 10th most used custom flag on desktop and we have not yet figured out a good solution for making this an actual setting. Kicking the can for now.
Chromium developers plan to add the disabling of media keys as a setting in the browser, but they have not yet decided on how that is going to happen.
Chrome users who set the flag in previous versions of the web browser may restore it in Chrome 101 temporarily by enabling the “Temporarily unexpire M100 flags”; this restores flags that were removed in 101 if they existed in version 100 of the browser. Starting with Chrome 102, it is no longer necessary to keep that flag enabled as the official media key handling flag will be restored in that version of the browser.
Closing Words
Google has not released a schedule for the integration of the option in Chrome, but it seems likely that it is going to happen before Chrome 113 is released. While Google could extend the flag again, if it can’t decide on how the option is added to the browser’s settings, it seems unlikely that this is going to take that long.
Now You: do you use media keys on your devices? (via Leopeva64-2)
There are no comments on this post yet, be the first one to share your thoughts!

Cryptocurrency: With prices crashing, what to expect this week? – Marca...

Abhinav Mishra - May 18, 2022
Editions:En/lifestyle/world-newsVarious experts say Ethereum is emerging as the strongest cryptocurrency to withstand the coming financial turbulenceThe cryptocurrency market is seeing a new phase of...

Paramount Plus: Free Version, Prices and How To Cancel Subscription –...

How to check the status of your tax refund – Fortune