While standard configurations of the 14-inch and 16-inch MacBook Pro models ordered through Apple’s online store are estimated for delivery in the first week of December, many custom configurations are shipping in late December, and some are even backordered into 2022. In the United States, for example, a 14-inch MacBook Pro configured with an M1 Max chip, 64GB of unified memory, and a 512GB SSD is estimated for delivery by January 3.
In-store availability is also scarce at the moment, with many MacBook Pro configurations unavailable for Apple Store pickup around the world. 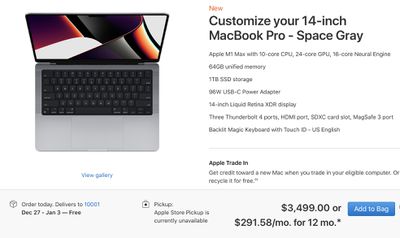 There are likely several factors behind the lengthy shipping delays, including strong demand for the new MacBook Pro models, an industry-wide chip shortage, and pandemic-related manufacturing disruptions. On an earnings call last month, Apple CEO Tim Cook said supply constraints had an estimated $6 billion impact on Apple’s revenue last quarter, and he said he expected the supply constraints to continue through the holiday season.
Key features of the new MacBook Pro models include Apple’s M1 Pro and M1 Max chips, mini-LED displays with ProMotion for up to a 120Hz refresh rate, longer battery life, and the return of ports like an SD card slot, HDMI, and MagSafe. Pricing starts at $1,999 for the 14-inch model and at $2,499 for the 16-inch model in the United States.

Brace for a shock: cost-of-living crisis drives up price of electric...

Abhinav Mishra - May 19, 2022
Recharging at home is 43% more expensive than a year ago – but EVs are still much cheaper to run than petrol and diesel...

Dogecoin: How high can its price go? – Marca English