If you’re wondering how to use Microsoft Office on a Chromebook, then we have you covered. Here’s how.
One of the best things about Microsoft Office is that it’s a cross-platform service. You can access it on Windows, Mac, iOS, Android, and even use older versions of Office on Linux. But what about on a Chromebook? Well, if you’ve tried to install the Android versions of Microsoft 365 or Microsoft Office apps on your Chrome OS device, you might have noticed that it does not work. That’s because you’ll need to use the web version, and today, we’ll show you how.
To get to the web version of Office on a Chromebook, all you need to do is visit Office.com in your Chrome web browser. After that, log in with your Microsoft Account, or your Microsoft 365 work account. You’ll then be taken to the Office.com main page, which lists your documents and the various apps like Word, Excel, PowerPoint on the right side sidebar. Click to each app to access it, but keep in mind that these web versions of Microsoft Office aren’t as fully featured as the Windows or Mac desktop apps. 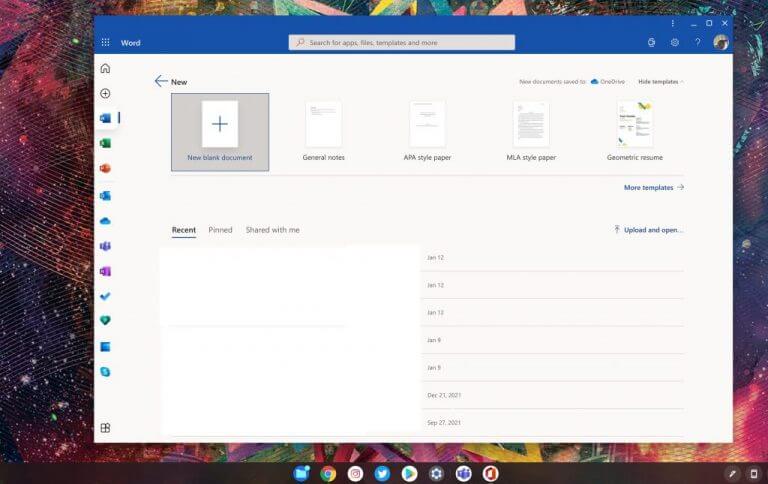 The basic editing, creation, and collaboration features are there, but more advanced features might not be. If you feel like something you need is not there, then check out Microsoft’s support document, which dives deeper into what’s missing and what’s not. Do also keep in mind that you’ll need the internet to access this version of Office.com. It’s not offline like traditional desktop apps are, but this should not be a problem, since Chromebooks are heavily dependent on the web, anyway.
We also want to mention one thing that might make your life easier. Though you can bookmark Office.com to get to it faster, you also can get to it by creating a progressive web app version (PWA.) The PWA version of Office.com will look a bit different when you open it up it up and feel a bit more like a native app since it removes your bookmarks bar and title bar. You can create a PWA by first opening Office.com, and then clicking the More Tools option. From there, choose to Create Shortcut from the menu. Name the PWA, and then choose Open as Window. You’ll now see that Office will be added to your Chromebook’s launcher. Pin it to the shelf by right-clicking the icon and choosing Pin to Shelf for quicker access.
As you can see, using Office on a Chromebook is easy. It’s just as simple as using Teams, which we previously explained in a separate guide.
George98: Great post
Commented on: How to delete a file or folder using cmd in Windows 10 or Windows 11
George98: The update is really helpful
Commented on: Windows 11 Version 22H2 Could RTM on May 24
George98: Another important thing when installing the system is the license. I bought mine here. It was cheap and most of all I had no problems after buying it: https://royalcdkeys.com/products/microsoft-windows-10-pro-retail-key
Commented on: How to create a bootable Windows 10 USB on Linux
Lee: My main problem with it is that my computer is a tool I use in the privacy of my home. It’s a tool that I’ve spent an extreme number of hours over the decades tailoring to my needs and wants. Microsoft deciding that they can…
Commented on: This Windows 10 Search Bar Feature Freaked People Out
Henry E Wyatt Jr: Better to wait and get it right. No need to rush.
Commented on: Windows 11 Version 22H2 Could RTM on May 24

Despite Fear In The Crypto Market Due To Bitcoin (BTC) And Shiba Inu (SHIB) Plunging, Gnox (GNOX) Holders – Bitcoinist

Despite Fear In The Crypto Market Due To Bitcoin (BTC) And...

Lynn Schindler - June 27, 2022
Vast swathes of the crypto market have suffered huge losses in recent weeks. With nobody sure what the bottom of the market will be,...