After months of speculation and rumors, Surface 2 is finally here! Microsoft has unveiled the second generation of Surface tablets at a press event in New York.

Microsoft’s Panos Panay took to the stage to describe the hardware of Microsoft’s Surface tablet. After 18 months of development, the Redmond engineers were able to improve previous models in terms of performance and autonomy. 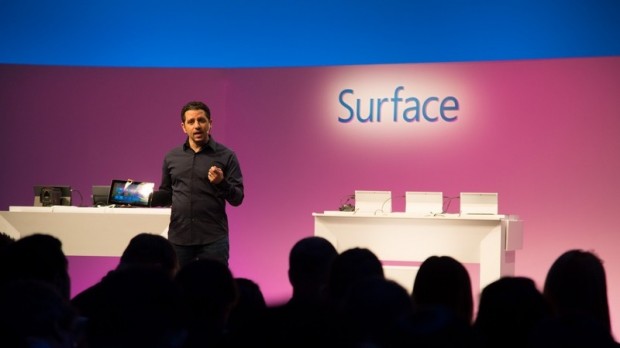 The Surface Pro 2, considered being a tablet for professionals, looks same as the previous version with a ClearType HD 10.6-inch display at a resolution of 1920×1080 pixels, but hardware specification has bumped with the fourth-gen Intel Core i5 (Haswell) processor, which has improved the overall performance by 20%, the battery life by 75% and graphical performance by up to 50% compared to the Surface Pro.

The most powerful, professional use tablet you will ever use or see. Surface Pro 2 is faster than 95% laptops available on the market today.

The Surface 2, a tablet based on the ARM architecture, is thinner, lighter and faster than its predecessor. The tablet integrates a NVIDIA Tegra 4 processor and features ClearType 10.6-inch full HD display like Surface Pro 2.

The next productive personal tablet ever built.

Surface 2 runs Windows RT 8.1 and boasts 3.5-megapixel front-facing & 5-megapixel rear camera, and a USB 3.0 port. This model also includes a built-in kickstand with double opening angle just like Surface Pro 2, and comes with a silver magnesium case. As expected, the Office 2013 RT suite now has Outlook RT. It will be shipped in 32GB or 64GB versions, and will be priced starting at $449.

Additionally, Microsoft will offer “Best of Skype” — free international calls and Wi-Fi for a year, and 200GB of space on SkyDrive for two years to potential buyers of Surface 2 and Surface Pro 2.

Pre-orders of the new Surface will start tomorrow, and the tablets will arrive in 22 markets on October 22. The Surface RT still remains in the catalog for $349 and will receive the upgrade to Windows RT 8.1.