Windows 10 Build 10240 is neither Insider Preview nor RTM

Earlier, it was reported that Windows 10 has finally hit RTM milestone with Build 10240, though it seems Microsoft still has a few nuances taken care of and has neither denied nor confirmed the status of Build 10240. The company has made it rather clear that Windows 10 Build 10240 “is one step closer to what will be rolled out on July 29.

Some of the new changes that Microsoft has made in the latest build include the new Edge browser with optimized performance. The company claims the Edge performs much better than Chrome and Safari in JavaScript benchmarks. It also includes non-preview versions of the Office Word, Excel, and PowerPoint for Windows 10 with a few tweaks. Another noticeable change that clearly suggests this is not a typical beta build as the Windows build watermark found in the bottom right corner of the screen is not there anymore. 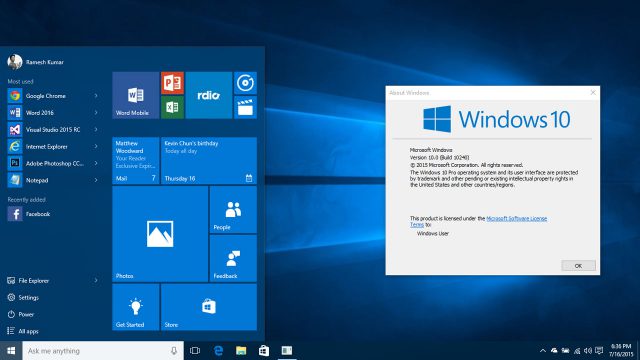 “We’re all working super hard here to deliver the best Windows ever, and are preparing everything that needs to be in place for our public release,” said Windows Insider chief Gabriel Aul.

Though there’s something unusual with build 10240, as its first time the new build has been released for both the fast and slow rings simultaneously, since the beginning of the Insider Program. In addition, the Build will not be available in ISO format, and will only be available to Insiders running preview version 10074 or newer.

And now, Microsoft has also removed all ISOs and keys to prevent anyone to do a clean installation of the OS. As from now on, new builds and updates will only be available via Windows Update.

The primary reason for this, our sources have confirmed is to test the upgrade process via build 10240, before the actual rollout begins at the end of this month. “We really need people to be using the upgrade path,” adds Aul.

Hence, the rolling out of build 10240 as an upgrade to the 5 million plus Windows Insiders, will likely give Microsoft a good idea of how smoothly the update process will work before the full version is released worldwide on July 29.

Apple rumored to start AirPods 3 production in August, launch during the fall event