by Abhinav Mishra
in Technology
Reading Time: 3 mins read
A A LG Electronics has officially unveiled its long-rumored first smartphone in the V series – the LG V10. The smartphone will be showcased at the company’s media event tomorrow, though the company has now shared all the details via a press release. In addition, the South Korean manufacturer also unveiled the LG Watch Urbane 2 Edition sporting a circular dial.

The main distinguishing feature of the LG V10 is its secondary display housed just above the primary 5. 7-inch QHD IPS Quantum display. LG says that this second screen can also be used in ‘always on mode,’ which can be used to launch certain apps and shortcuts. In addition, it can also be used to display notifications so that the primary display is not interrupted while in full-screen mode. The company explains that while users are running multimedia content on the primary screen, the secondary screen will notify users about incoming calls or texts. 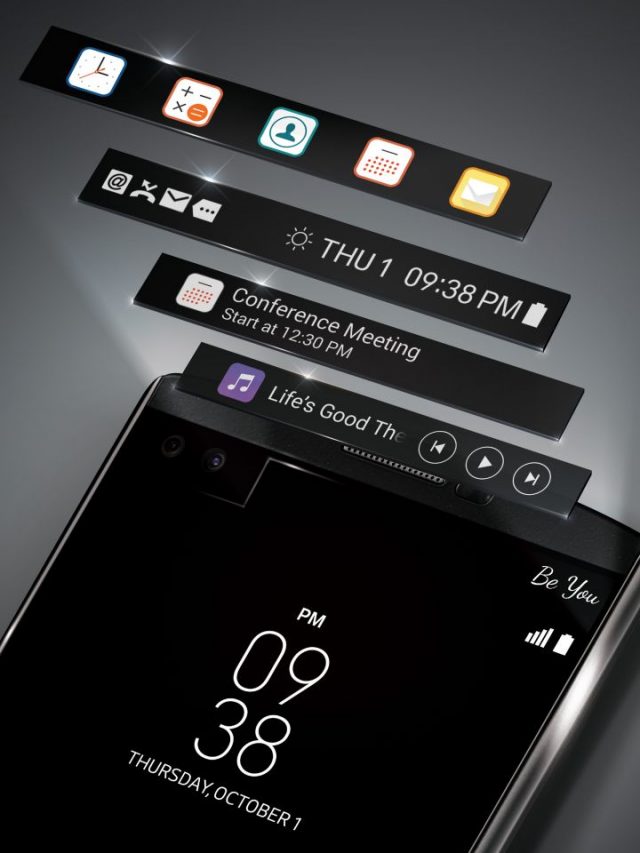 Another notable feature of the phone is its 5MP dual front camera that house two separate lenses that can capture standard selfies, along with wide angle selfies to 120 degrees. Other highlights of the camera is the addition of manual mode for recording videos, similar to one featured on the LG G4 which allows users to record ‘high-quality videos’ as they can customize shutter speed, frame rate, and more while recording.

Its also worth pointing out that the LG V10 sports a ‘Dura-Guard’ frame to bolster its durability in the event of an accidental drop or bumps. The company touts that the frame of the device has been carved out of SAE grade 316L stainless steel, apparently to make high-end surgical tools and watches.

Coming on to the specs, the LG V10 is powered by a Qualcomm Snapdragon 808 processor bundled with 4G of RAM. The primary display is a 5.7-inch screen with a resolution of 2560×1440, while secondary display is 2.1 inches with 160×1040 pixels. The handset comes with 64GB of internal storage along with microSD support up to 2TB.

Optics on the device include a 16MP rear shooter with OIS along with a 5MP dual-lens front camera already mentioned. It runs on Android 5.1.1 with support for LTE-A Cat. 6 standards. While juicing up the device is a 3000mAh removable battery.

Starting this month, the LG V10 will be available in Korea followed by markets such as the United States, Latin America, and the Middle East in the near future. It’ll be offered in five color variants namely Space Black, Luxe White, Ocean Blue, Opal Blue and Modern Beige.

The company has also offered a first look at its next gen Watch Urbane smartwatch. The main highlight of the 2nd gen smartwatch is its cellular capabilities, implying that it doesn’t need to be constantly connected to an Android device to make it function. It features a 1.38-inch P-OLED display with a resolution of 480×480 pixels. LG claims that LG Watch Urbane 2nd Edition features the “highest resolution display of any smartwatch” currently available in the wearable market.

Powering the Android Wear smartwatch is a 1.2Ghz Qualcomm Snapdragon 400 processor bundled with 768MB of LPDDR3 RAM. While juicing it up is a chunky 570mAh battery. It comes with 4GB of internal storage, and its connectivity features include support for Bluetooth 4.1, Wi-Fi, LTE, and 3G. Besides, it also gets an array of sensors including accelerometer, gyro, compass, and barometer along with an IP67 certification that should make it water and dust resistant as well.

It will be offered in Space Black, Opal Blue, Luxe White, and Signature Brown color options. The device is slated for a launch initially in the U.S. and Korea. However, the company is yet to announce specific details about pricing and availability.

Twitter now planning to ditch its 140-character model for tweets