A new iPhone launch is always preceded with almost an unending stream of rumors, speculations, leaks, renders. It’s just that things have been on a hyper mode this year given the impending launch of the anniversary iPhone 8. And one of the newest speculations on this front somewhat confirms what has been rumored for months now, that of a completely bezel free design.

Credit for latest revelation goes to case designer Nodus who claims to have access to the iPhone 8’s CAD files. A careful analysis of the same has led experts to believe the upcoming iPhone 8 will be unlike any we have ever seen before. Gone would be the bezels that were a prominent feature on all previous iPhone models. Instead, it is going to be an edge-to-edge display this time, save for a minor cut-out at the top for the camera and other sensors. Such a layout again reminds us of Andy Rubin’s Essential handset revealed a few weeks back.

Further, except for the small opening at the top, the display is otherwise a seamless piece of glass extending all the way to the bottom edge. There is no physical home button as such, which again has brought the other key design element, that of the fingerprint sensor back to focus.

There is no confirmation if Apple has indeed managed to pack in the Touch ID sensor underneath the front display. The lack of a physical home button or even a fingerprint sensor at the back definitely points to that. However, there is apprehension Apple might emulate the Sony strategy of going for an enlarged side power button hiding the touch sensor. 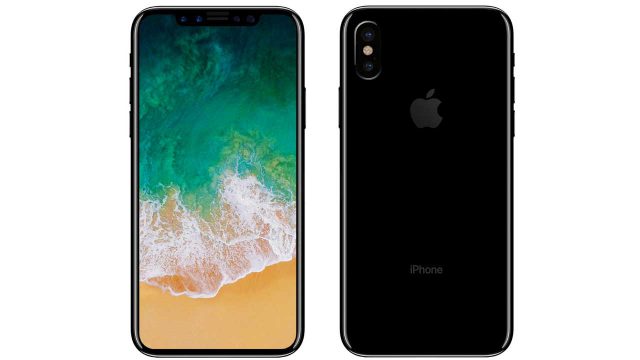 As for the display, it is believed to be all of the 5.8-inches, which makes the iPhone 8 one of the biggest ever. However, given the complete lack of any bezels all round, the overall dimensions of the handset will be hardly bigger than the iPhone 7 Plus.

Moving over to the rear, there, of course, is the dual lens cam as was being rumored for long. However, the two lenses are arranged vertically with the LED flash sitting in between the lenses. The entire camera housing again is a bit raised, making the rear look slightly unwieldy. The camera again is believed to incorporate augmented reality, 3d mapping and depth of field features that will not only allow it for better photography but for AR/VR application as well.

The rest of the details that have come to the fore include the incorporation of a 3D camera at the front complete with face detection technology. Also, there will be no USB Type-C port or the 3.5mm headphone jack. Instead, there is going to be Apple’s proprietary lightning port for both charging and data transfer roles.

As for the expected launch schedule, chances are that it might get to see the light of day on Sept 13, 2017.