The Nokia X6 is finally official now post its launch in China. The phone apart from bearing the once famous Nokia branding is also special for a few other reasons. One being its incorporation of the notch display while the phone is also the first from the company’s new X-series of smartphones.

The new Nokia X6 also impresses with its edge to edge display. The notch is also not as expansive as on the iPhone X, it is just wide enough to house the front cam, proximity sensor, and earpiece. The bottom holds a chin though the fingerprint sensor has been shifted to the rear. On the whole, the Nokia X6 is a sleek piece of handset that buyers no doubt will like to hold on their hands.

Further adding to the appeal is the phone’s impressive spec sheet that speaks of a Snapdragon 636 core and Adreno 509 GPU combo. Complementing that is either a 4 GB or 6 GB RAM both of which is accompanied by a choice of either 32 GB or 64 GB of storage respectively. Of course, there is also the microSD card slot as well to add more storage. 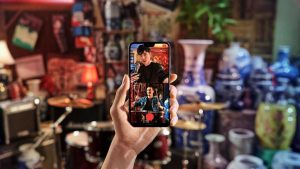 Those apart, the phone comes with a 5.8-inch Full HD+ (2,280 × 1,080 pixels resolutions) LCD having an aspect ratio of 19:9. The phone runs come pre-installed with stock Android 8.1 Oreo which happens to be another positive with the phone. Further, powering the device is a 3,060 mAh battery which supports Quick Charge 3.0.

So far the optics are concerned, the new Nokia X6 incorporates dual rear cameras arranged in a vertical stack. That includes a 16 MP camera of aperture f/2.0 along with a secondary 5 MP lens for depth sensing having an aperture of f/2.2. Including AI chops happen to be the newest trend in the segment, and the Nokia X6 too conforms to that. Nokia said the feature will enhance image quality and can also suggest appropriate stickers based on the object at a focus.

Likewise, there is a 16 MP front cam as well, complete with AI backed face detection technology. This also doubles up as a face unlocking mechanism though there is a rear placed fingerprint sensor as well for added security.

Nokia 9 specs and features got leaked

The phone is exclusive to China at the moment, with the company yet to reveal its international launch plans as yet. A for its price, the phone has gone on sale in China for RMB 1,299 and RMB 1,699 for the 4 GB RAM/ 32 GB and 6 GB RAM/ 64 GB version respectively. Both the prices translate to around Rs 13,900 and Rs 18,100 respectively at present conversion rates.