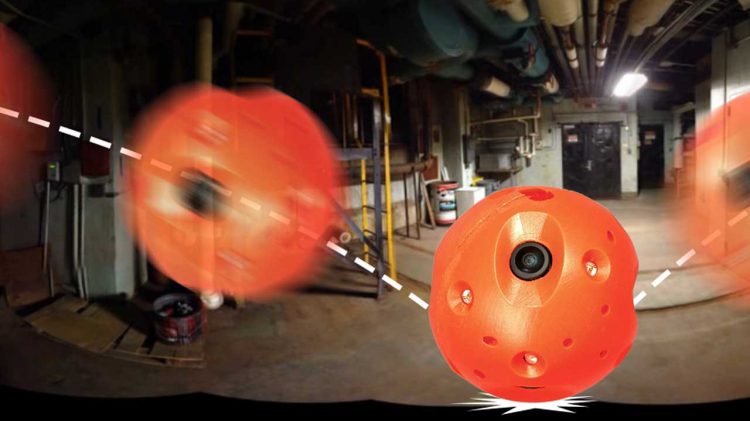 Bounce Imaging is easily one of the coolest ideas that has come along in policing or technology as a whole in a very long time. It features a ball, with several camera angles coming from it, and can give the user of the ball – who throws it – the ability to view a wide range of angles where ever the ball lands. For SWAT teams or varying levels of tactical teams, it would mean giving them the opportunity to see things in a room without actually entering the room or using traditional robot technology.

The Bounce Imaging concept is simple enough, too that it functions well with any level of technological experience. So, if a user feels uncomfortable operating something as advanced as a robot, they will likely feel significantly more comfortable with something as simple as their smartphone. The user can simply pull, drag, and squeeze the screen to see different angles, and to have the opportunity to get an idea of what is around them.

Francisco Aguilar, who is the CEO of Bouncing Imaging pointed out that, “It basically gives a quick assessment of a dangerous situation.” This is a concept, and a company that was launched in 2012 after a group of individuals from MIT essentially brainstormed the product. It’s an incredibly interesting concept design and delivers something that users really haven’t ever had before. While this is something that might have sat in the recesses of ones mind, this isn’t something that will necessarily be the first thing thought of at all.

It features a six-lens camera, which gives users the ability to see what is in front of them at a wide range of angles. It covers all angles that exist, which is great for policing, and special task forces too. The long-term benefits of this technology though span far beyond policing, like many have suggested though. This is a great method for getting places where humans can’t necessarily reach. This gives them the unique ability to see things before they could physically see things and potentially save lives in the process in various situations.

The tactical ball that Bounce Imagining is producing will cost around $1,400 but is not for the traditional user. Rather, this is for the advanced user, or more suitably police forces or tactical forces. This will give them the opportunity to see in spaces where they otherwise would not be able to see unless entering that space and risking lives. However, the tactical version will cost more. It will cost those groups around $2,400 to obtain this piece of technology, but presuming that it’s something that would be necessary for fighting crime in certain regions, it could be very helpful.

Bounce Imaging is already in the process of distributing 100 different camera balls to police departments around the U.S. who will be participating in a study to see how effective they are, and how much more effective they can be.