Battery life. It seems as though we can’t get enough of it. We have 1 day of battery life, we want 2 days. We get 2 days, we want 4 days. Whether we have smartphones, tablets, smartwatches or other mobile devices, we want more battery life. So far, the mobile race has consumed itself with making devices thinner, lighter, and faster while battery life takes a backseat.

Even smartphones don’t have the best battery life. Usually, smartphone makers are forced to choose between thin and light on the one hand, and bigger battery and heavy, on the other. Take Apple, for example: Apple touts its products as thinner, lighter, and faster, but by keeping devices small, Apple also severely limits the battery life of the product. When Apple announced the first iPad with Retina Display, the iPad 3, in 2012, it had a battery size of 11,666mAh.

Today’s iPad Air 2, just announced last September, only has a battery size that’s over 15% smaller than the original iPad Air: the iPad Air’s 8,827mAh battery has given way to the 7,340mAh battery of the second-generation iPad Air. The iPad Air 2 has a 37% smaller battery than that of the first Retina iPad. Apple has still kept battery life at a sufficient 10 hours, but imagine what your battery life would be if Apple could make the iPad thinner and lighter but expand the battery capacity to achieve the same battery capacity performance of the iPad 3? 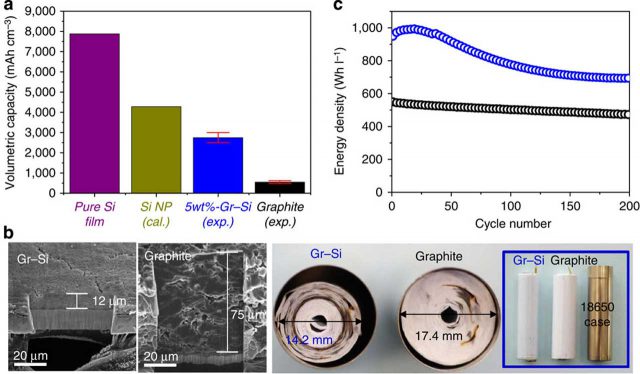 Smartphone and mobile device maker Samsung has been at work on a new experiment that can extend battery life up to twice that of current lithium-ion batteries. Current battery technology, first commercialized by Sony, seeks to “eek” out as much battery as possible, but it only utilizes what is there without providing any expansion as to its capacity.

Sony was, and still is, the top Android manufacturer (among the giants, at least) when it comes to battery life. Sony’s Xperia Z line still gets the best battery life in the Android world, with the company’s latest Xperia Z3 providing 10 hours of on-screen time and 2 days of battery life on average. Many a tech reviewer has praised Sony’s 9 hr., 29 minute battery times when the Japanese manufacturer’s devices are put through endurance tests. At the same time, however, Korean manufacturer Samsung has formidable battery life in its devices and is now placing itself in a position to begin a new era in mobile devices – going further than Sony’s age-old lithium-ion batteries allow.

Samsung has achieved this milestone, the company’s R&D announced on June 25th, by way of doing away with the graphite as a cathode material and embracing silicon instead. The benefit with silicon, of course, is that it doubles the battery capacity (energy volume), but it also depletes quickly with constant charging and use. Samsung has taken the silicon challenge head-on by adding a protective coating around the graphene on the silicon cathode to protect the silicon as a battery is charging, recharging, and being used to its fullest extent. In the company’s own study, it was able to achieve 1.5 to 1.8 times the battery capacity of traditional lithium-ion batteries.

Samsung says that consumers shouldn’t expect this battery tech to be utilized until the next two to three years. Until that time, we’ll celebrate what the company’s given us in the Note 3, Note 4, and soon, the Galaxy Note 5. At the same time, however, the company that has always aimed to be on the cutting edge of technology (ex: wireless charging) now looks to take us one step further into what could one day become the next big thing.