Microsoft announced yet another build for PCs to Windows Insiders in Fast ring with the release of Build 10166. And just like the three builds released last week, the company says the newly released build is primarily about bug fixes and fine tuning. Though there’s one feature that Microsoft has activated with this new build, which for now is limited to users who live in the Seattle area.

Users living in the vicinity can try out the new Microsoft Wi-Fi app, which essentially allows users pay with their debit or credit cards, a Microsoft gift card, PayPal, or wireless carrier billing.

“The Microsoft Wi-Fi app provides the choice to pay with a credit or debit card, a Microsoft gift card, PayPal, or wireless carrier billing, and it helps keep your information secure since it uses the Windows Store payment system. Completing the purchase is simple as there is no need to enter additional personal or payment information if you’ve already registered in Windows Store”, explains Microsoft’s Gabe Aul. 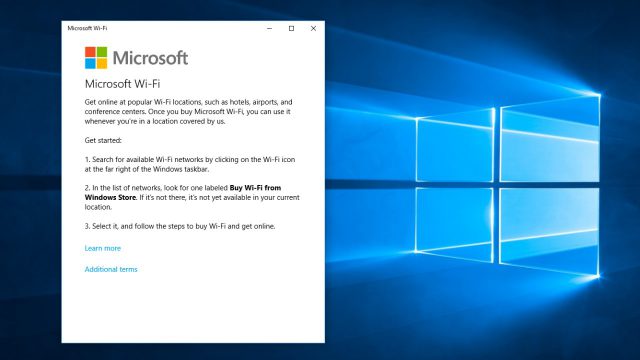 While as far as the general availability of the feature is concerned, the company says, ‘Right now, we’re testing this experience out in Seattle but it’ll soon open up to the rest of the U.S.’

Users who are on earlier versions of Insider Preview build should make sure they constantly keep updating to the latest releases, notes Aul.

Just last week, Microsoft rolled out Build 10162 to the Windows Insider Program’s slow ring as well, and also released ISO copies of the build so that users can perform a clean install on PCs that hasn’t yet been upgraded to Windows 10. The official launch of Windows 10 begins three weeks from now on July 29, which will initially be rolled out to members of the Insider Program before being rolled out to other users.

July has apparently already been a big month for Microsoft, especially given the highly anticipated launch of its forthcoming OS. The company is in the final stages of completion as RTM builds will reportedly be heading to OEMs by Monday July 13th. Meanwhile, the company also announced its rebranded ‘Groove’ music streaming service, formerly known as ‘Xbox Music’, the Windows maker claims the services boasts a massive library of over 40 million songs that can be streamed or downloaded.

In addition, the company also renamed its Xbox Video app, which will now be called just ‘Movies & TV’ in Windows 10. Users will be able to rent or buy movies and TV shows, which will be available across all Windows 10 devices and Xbox consoles.