by Deidre Richardson
in Technology
Reading Time: 2 mins read
A A 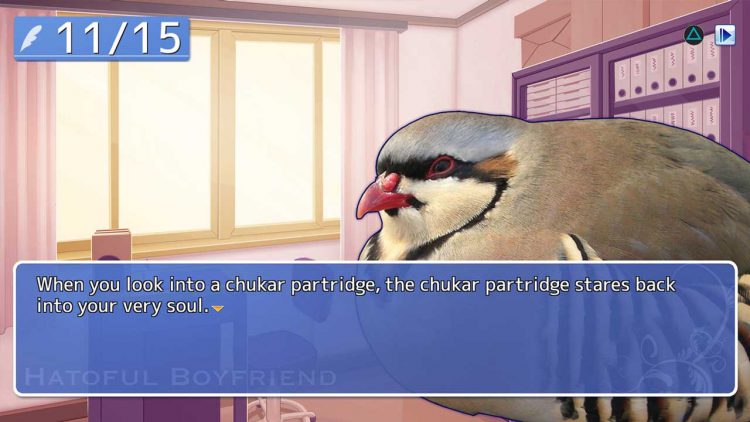 Are you a quirky gamer who’s always up for a weird game? It seems as if your gaming dreams are coming true. Game creator Hato Moa is back with a game that tackles a pretty sticky issue of our time, as he learns to us a game called Hatoful Boyfriend. The game is all about a high school girl who lives in a world surrounded by birds. The high school girl does date a bird, as the birds are mostly male in “gender”. Loyal players say that there is an option to let her date a woman, but there is no standard LGBT advocacy in the game for now.

While loyal fans remember the game and its developments, Moa has added a new long-term character to the game, Tohri. The game will arrive on PC, PS4, and PS Vita on July 21st for the low price of $9.99 (you read it right: the dot is in the right place).

The game will certainly intrigue a number of loyal fans, but the human-pigeon dating slightly plays up bestiality in some regard, seeing that it appears as though the girl dates a bird instead of dating another high-schooler who would be human. While we certainly think animals are good to have around the house and throughout all of life, we wouldn’t advocate the thought of an animal and a human having some sort of “dating” relationship.

There are a number of movies, TV shows, and cartoons that currently play-up the friendships between humans and the animal kingdom such as “The Ant Bully,” “G-Force,” and even the decades-old “Teenage Mutant Ninja Turtles, in which news reporter April O’Neal befriends a group of turtles who save her from the hands of some crooks.”

TMNT has been revised for a more contemporary audience today (the cartoon has been modernized), but it shows how humans and animals can be good friends. Humans and animals dating, however, is not a kid-friendly theme I’d want my two-year-old niece to accept and champion.

It’s okay to want to show that “a bird is man’s best friend,” but the game’s arrival and its human-animal love theme is nothing short of bad timing. Within the last few weeks, a man was fired from his job after posting a message on Facebook about being in love with his dog and hoping he and his dog could get married someday, in response to the recent legalization of gay marriage in the United States. The problem with his post is that it was submitted just days after the legalization of gay marriage, sending the message to gay marriage advocates that if homosexuality is okay, bestiality is, too. It also made fun of the hopes and dreams of those who have lived in fear and marginalization because of their inclinations.

It’s true that homosexuality and bestiality are worlds apart, but a game like this will do nothing to convince anti-LGBT advocates to accept the current social revolution in the US. Instead, Hatoful Boyfriend will only convince LGBT critics that the slippery slope argument “homosexuality is a stone’s throw away from bestiality” is true. After all, if humans can change proper sexuality, it is said, why can’t they change the human-animal relationship? If male-male sexuality and female-female sexuality are normal, why not human-animal sexuality?