Polar bears are in serious trouble due to climate change, new study finds 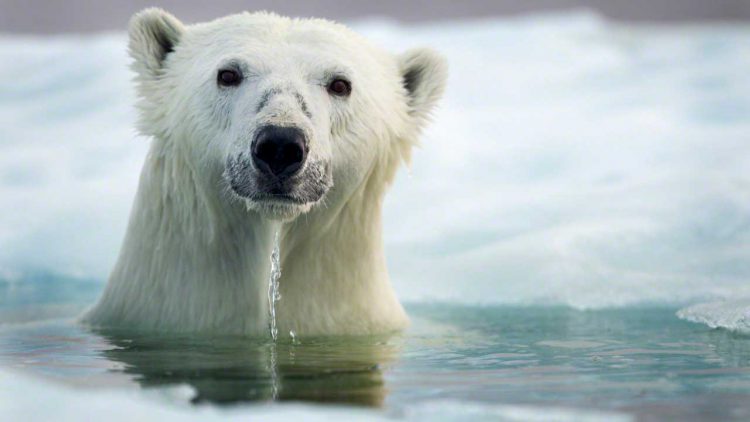 Polar bears have been at the center of the climate change debate for years. Every time someone mentions climate change – polar bears are brought into the equation or shown as a prime example of how much impact a changing climate can have on a significant species in the region. Sure enough, the news just keeps getting worse for polar bears – who are now facing an even more grave situation, than they were just a few months ago.

The weather hasn’t changed. The climate hasn’t gotten any worse, and the amount of change is the same – but new research shows that polar bears are facing an even more uphill battle than they were before when it comes to getting back on track. A research team tested a long-standing theory regarding the life of a polar bear, and their ability to conserve energy by turning down their metabolic rate.

To this point, the theory was that polar bears would conserve energy in the summer – much like they do in the winter. They would turn down their metabolic rate, and with that lower metabolism – survive well the same way that other bears have been known to around the world. It would appear as though the long-standing theory was completely wrong. The team studied a group of polar bears and found that the bears don’t actually have the ability to dial back any part of their metabolic rate in the summer, like they do in the winter when they’re hibernating.

Combine this with the fact that the polar bears diet is being seriously pushed back thanks to a quickly changing climate – and what we’re left with is mass uncertainty in terms of what the future of polar bears will look like. Forget about hopefully preserving their space, and them surviving in the meantime. It isn’t just a matter of not having enough food to get through summer. Now, they don’t have enough food to get through any season, and they can’t even dial back their metabolism like many have suggested.

This isn’t the first piece of research though, which has suggested a path just like this. Recently, a different study found that polar bears cannot sustain themselves on a diet of strictly berries and other plant-like options. Some had contended that their diets would just change if the climate evolved in a way that wouldn’t allow them to hunt seals as they do today. Yet, that simply isn’t the case.

The trend is going the other way – and it’s a trend that cannot be stopped. At this point, swift and quick change in how we treat climate change will be necessary, and since the process has already begun for polar bears – it may already be too late to maintain them long-term. The concerns are real, but the outlook for polar bears is bleak at best.