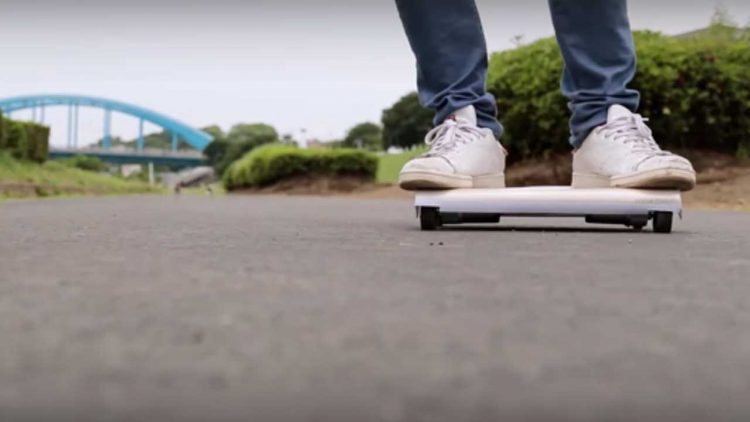 Earlier we’ve witnessed Segways, then we were introduced to those super-fast electric skateboards, followed by self-balancing hover boards. Now, a Japanese engineer Kuniako Saito and his team at Cocoa Motors have introduced of what is deemed to be the world’s smallest electric vehicle. Dubbed as the ‘Walkcar’, the automobile is about the size of your average laptop and looks more like a small skateboard as opposed to a traditional car. Saito says, “it’s the world’s first ‘car in a bag’ featuring an aluminum body weighing a mere two-three kilograms (4.4lbs to 6.6lbs), depending upon the variant.”

The Walkcar gets both indoor and an outdoor version, with the latter being slightly heavier as it is better equipped to handle outdoor conditions. Despite the small size of the aluminum board, Saito adds that it’s more robust than what it appears and can handle loads of up to 120kgs (256 lbs).

The tiny vehicle is easy to operate as well. To start using the car, all one needs to do is to simply stand on the aluminum board to get it started, get off the aluminum board, and the vehicle automatically shuts down. While to change direction, the user just needs to shift their bodyweight in the desired direction.

And the best part, it saves commuters from the hassles of find a parking space as it easily fits into a backpack or a knapsack while not in use. Saito seems pretty confident that his Walkcar offers much more utility compared to the bulky devices like Toyota’s Winglet or Segway.

Saito and his team expects that the Walkcar can be put to several uses as a means to commute, adding that the slender vehicle has enough power to push electric wheelchairs with ease. It can reach top speeds of up to 10 kmph (6.2mph), and can travel up to 12 kilometers (7.4 miles) after three hours of charge.

The Walkcar from Tokyo based Cocoa Motors will go up for pre-order starting in October as a part of a Kickstarter funding campaign, though its regional availability is not yet confirmed. The Walkcar will start shipping next spring and is priced at approximately $800.

This 21-century magic carpet of sorts seems quite promising as it offers a new hassle free way to commute, giving portability as well as mobility without those woes of limited parking space.

How to restore backup from iCloud