“G” is for “Google”: How the Alphabet has everyone confused 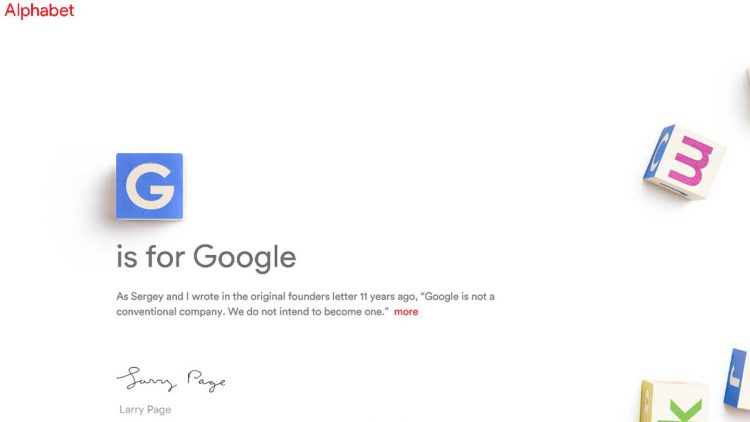 When you think of Google, what comes to mind? Gmail? The Google search engine? YouTube? Mobile ads? Privacy invasion? Android? Android One? Google has been a lot of things to a lot of people over the last few years, but the company sees itself as being so much more than just a mobile company. Sure, Android, Gmail, YouTube, and the Nexus smartphone and tablet line have been at the heart of the company’s work over the last few years, but Google has always been an experimental company.

For example, despite the company’s push in the mobile sector, Google still had the Project X Labs where the company experimented with Project Loon (Wi-Fi balloons), not to mention its Google Glass project (which, though a failure initially, is resurrecting by way of the enterprise sector), robotics OS and robots, as well as drone investments. Google is a tech company and has specifically had its feet firmly planted in the mobile world, but founders Larry Page and Sergey Brin want it to be a bigger tech company than just a mobile one.

And out of this desire, the “Alphabet” was born.

That is Google’s new parent company.

As of yesterday, Page and Brin decided to make Google somewhat smaller than it has been in recent years: rather than continue Google’s push into the tech sector, both co-founders decided to create a parent company, called “Alphabet,” and make Google but one of many companies under the “Alphabet” umbrella. Of course, you have to step back and admire the search engine giant’s genius: “Alphabet” conjures up thoughts of “A, B, C, D, E,” and so on, but it is also easy to find by way of the search engine.

Google’s web traffic has been based on a technique called Search Engine Optimization (or SEO), a technique in which names are often given with ease. Companies usually rename their businesses with easy names that can be quickly discovered on the internet. For example, a business in Louisville could have a fancy name that’s hard to find, or it could rename itself something bland like “Louisville Produce” in order to be discovered by local residents in Kentucky.

Google is an expert at SEO, seeing that it owns the world’s most powerful search engine (just ask the EU, with the current “right to be forgotten” case against Google, and you’ll see why) and knows this technique inside and out. So naming the company “Alphabet” will pay huge dividends.

And yet, the “Alphabet” (the company, not the letter system) has everyone confused.

It’s come as the result of major changes to Google over the last year or so. There’s been the downgrade of Google+ and the resignation of its head, Vic Gundotra. There’s been the relinquishing of certain restrictions at Google+, and the detachment of Google Photos from the Google+ app to a regular app within Android. And then, there were rumors that Google would kill the Nexus line, a rumor promoted by Elder Murtazin, a rumor that Google’s Dave Burke flatly denied at last year’s Google I/O. But something tells me that Elder knew a thing or two about what was happening at Google “behind the scenes.”

Now, we have an idea as to why Google spent so much time doing away with certain long-standing services, and why the company has spent so much time pushing its new Android One program. Google has been accused of having a very non-diversified workforce, of having few people other than white, middle-class employees work at its corporation. The company has also spent time pushing Android One because of its desire to emerge beyond the nationalistic reputation it has earned as an “American-only” firm to become something larger, something global.

Android One was the company’s first push into the global goal. Think about it: for the last few years, every product Google offered was only available via the Play Store – and, in many cases, only accessible to countries like the US, UK, and the EU as a whole. Indian customers and those in developing markets have had little access to these products and, with smartphone market oversaturation reaching its peak in developed countries, India and Thailand are two countries that are becoming the next frontier in the mobile space. And Google, an American company for years, has finally started to think globally.

Not only is Google thinking “globally” these days, Google is restructuring to chase after the corporate dream: becoming a conglomerate. Yes, Google’s Android OEM, Samsung, has achieved this already. Few people are away that Samsung consists of half a million payroll employees, as well as its own divisions: there’s Samsung Electronics, Samsung Display, Samsung Life Insurance, Samsung Medical Center, and so on. Samsung started out selling produce and a few appliances but has gone on to become one of the most successful companies the world has ever seen.

And Google wants to become something more than just a national company that Americans love. Larry Page and Sergey Brin’s vision for Alphabet is that it become more than just “Google.” Google is mobile, but this company could have its hands in nearly everything if it could restructure in such a way that it could handle all its goals with companies and respective CEOs while Page and Brin focus on other matters. It’s a streamlining process that will make Google effective while allowing Alphabet founders Page and Brin to grow in power. Any company can succeed nationally among its own people, but it takes courage to grow globally. “Alphabet” will allow Page and Brin to achieve that goal.

At this point, though, Alphabet is confusing. It comes at an unexpected time, on a random day for most Android users, nearly three months after Google’s I/O 2015 conference and immediately before the launch of Android M in October with the release of two new Nexus smartphones. However, the Huawei Nexus is the very first high-end smartphone that Google is launching with a Chinese manufacturer (LG is Korean, mind you), and Google is pushing increased presence in China with the hopes that Huawei will help in this regard. And, while many Americans can see where Google’s been going with the Huawei Nexus and the Android One program, both global in scope, the declaration itself, “we are now Alphabet,” doesn’t make sense. The timing is off, the plan seems random, and something invented yesterday.

In short, Google has been streamlining its services on Android (Photos removed from Google+, Auto Backup for all Android devices, a feature once restricted to its Nexus lineup, etc.) have all been moves to streamline mobile – but no one could’ve ever foreseen Alphabet.

The new conglomerate company or parent company name itself is unforgettable and nostalgic: Whenever you think “Alphabet,” you’ll now think of Google. At the same time, however, Google (I mean, Alphabet) has some explaining to do. Why now? Why become a conglomerate now? Is global the real goal, or is there something else? Google, are you becoming evil?

Maybe “G” isn’t only for “Google,” but “global.” Or, there could be another word at play here: “greedy.” The only way we’ll know is if Google tells us.