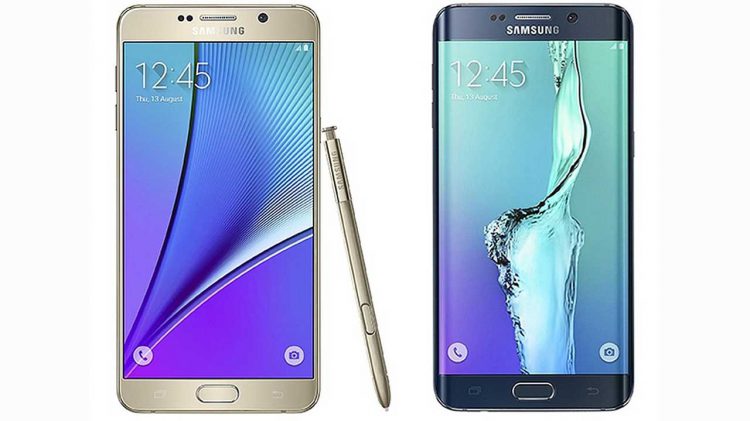 The big day has finally come – and gone. Samsung has announced its “next big things,” the Galaxy Note 5, the most prestigious phablet in the phone industry, as well as the larger Galaxy S6 edge (called the Galaxy S6 edge+).

Let’s dig into both devices to see just what Samsung presented today.

The Galaxy S6 edge was a fine piece of Samsung craftsmanship revealed earlier this year, but with it, as is the case with all Samsung devices, came criticism. The Galaxy S6 edge had a 2,550mAh or 2,600mAh battery (found in the Galaxy S4) and was said to offer paltry battery life. With the criticisms, Samsung decided to release a device that has a larger display than the 5.1-inch display of the S6 and S6 edge, a display size that, at 5.5 inches across, matches that of Apple’s iPhone 6 Plus display, but is far more ergonomical than that of its rival.

Of course, apart from the display size, you still get the Super AMOLED display with the Quad HD resolution of 2,560 x 1,440p (pixel density of 518ppi), a 5MP front camera with f/1.9 aperture, a 16MP back camera with f/1.9 aperture, Samsung’s home-grown, octa-core Exynos 7420 processor, with Samsung’s TouchWiz overlay on top. There are a few differences, however, aside from the display: the new Apps Edge that allows you to add new apps to your edge in addition to color-coded contacts, and the addition of fast wireless charging.

Fast wireless charging and fast charging shouldn’t be confused: fast charging has been a staple of Samsung devices since at least the Galaxy S5 (if not longer), and it allows your device to charge faster when it’s plugged into a wall. The Galaxy S6, S6 edge, and Galaxy S6 Active all feature wireless charging. Wireless charging utilizes a charging pad while allowing your smartphone to charge on the pad and avoid being plugged into a wall charger. It is “wireless” in that it allows you to charge your phone without having wires connected to the phone (though the charging mat still needs wires to connect to a wall adapter).

Fast wireless charging, however, is a fusion of wireless charging and fast charging: it allows you to charge your phone wirelessly while still achieving the fast charging we all know and love. Samsung says that fast wireless charging will allow you to completely charge the phone in 2 hours max (120 minutes), which is one hour faster than most smartphones (ahem, the OnePlus 2 with its 3 hr., 20 minute charge time) can charge. As for RAM, Samsung decided to add 4GB of LPDDR4 RAM to the device, which should make it attractive in the eyes of power-hungry users that can’t get enough of the multitasking experience.

For those of you that long for new colors, the Galaxy S6 edge+ got a new color today: Silver Titanium. The long-rumored Galaxy S6 edge+ keyboard also became a reality today as well, and Samsung announced a new Level pair of headphones as an additional, new accessory.

The Galaxy Note 5 may not win you over in the spec department. True, Samsung’s specs in the Note 5 are reminiscent of the company’s Galaxy S6 and S6 edge and Note 4 from last year, so you’re still looking at a 5MP front camera, 16MP back camera (except with f/1.9 apertures for both cameras instead of the f/2.4 aperture of last year’s Note 4), octa-core, Exynos 7420 processor, 5.7-inch display with the same resolution, etc.

However, Samsung excelled in the little things this year: the company added a push-to-eject effect to its S Pen stylus (which should make it comfortable to use regularly) and added three new software features: Scroll Capture, Off Screen Write, and Write on PDF.

First, there’s Scroll Capture. The problem with capturing your screen via screenshot (in particular, Samsung’s Palm Swipe to Capture) is that you can’t capture all of a long screen, only part of it. The new Scroll Capture allows you to scroll while capturing the entire screen. Off Screen, Write lets you write pertinent info and save it to your memo and gallery while your screen is off. Write on PDF allows you to do what the function is named: write on PDFs.

The surprise holdout: the Gear S2

Rumors of a Gear A had Samsung faithful holding out for a new smartwatch reveal at the latest Galaxy Unpacked 2015 event, and Samsung didn’t disappoint – in a way, that is.

The Korean manufacturer decided to tease a new smartwatch rather than announce a new one. The “teaser” showed the smartwatch name, “Gear S2,” with the date of the reveal (9.3.2015) as well as the event (IFA 2015) and the city (Berlin, Germany). While rumors have persisted about why Samsung announced its Galaxy Note 5 and S6 edge+ this month (one being that Samsung wants to get an “edge” on Apple in the smartphone race; per the Wall Street Journal), Samsung seems to want the next few weeks to perfect its circular, round smartwatch before releasing it to the mass market.