Google along with Korean manufacturer Samsung have finally rolled out their wireless payment processing services in the US, dubbed as Android Pay and Samsung Pay respectively.

Both services essentially work in the same way, apart from a few minor differences. While technically Samsung’s service is more advanced, though its limited to work with a handful of Samsung’s devices. On the other hand, Android Pay works on all devices running Android 4.4 “KitKat” and above. However, Samsung’s wireless payment service offers much more convenience over Google’s and Apple’s wireless payment methods.

Essentially, all services use the same NFC payment method, however Samsung’s service is also backwards compatible, which implies that it also works at terminals who deprived of basic NFC network architecture. This has been made possible with Korean manufacturer’s recent acquisition of LoopPay. As in these locations, the use of MST (magnetic secure transmission) allows users to select a card from their virtual wallet, to send short-range magnetic impulses to activate the data stored on the stripe of a debit or credit card to read the data stored on these strips. 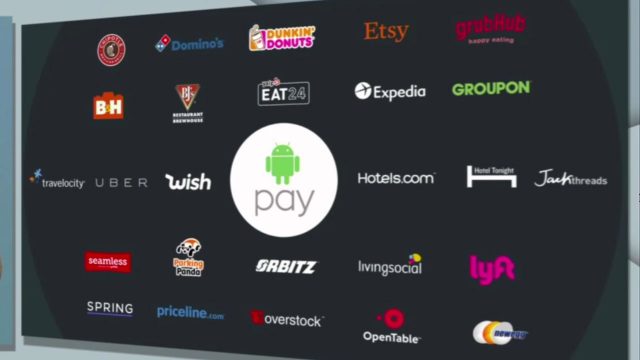 Hence, this would make Samsung Pay the most supported service across retail stores than any other mobile payment service, giving it the opportunity to lock horns against rival Apple Pay. Though, Samsung’s service has currently only been integrated into Galaxy S6, Galaxy S6 Edge, Galaxy Note 5, and Galaxy S6 Edge+.

Google on the other hand has tied up with American Express, Discover, MasterCard and Visa for its Android Pay. In addition, the company says that Citi and Wells Fargo will be available in next few days, while ‘Capitol One’ is ‘coming soon.’ It’s also worth pointing out that banks like USAA, US Bank, Navy Federal Credit Union along with many regional banks will support Android Pay. Google also says it’ll be busy working to add support across more banks to have full support.