In what may be considered as one of the most bizarre marketing decisions, food and beverage manufacturer PepsiCo has announced that it’ll be launching smartphones in China. However, the US-based cola company has made it clear that it will not be manufacturing devices. Instead, it’ll be lending its brand name to third party partners.

“We are pleased to share that Pepsi is working with a licensing partner to bring a line of mobile phones and accessories to market in China in the next few months. Available in China only, this effort is similar to recent globally licensed Pepsi products that include apparel and accessories,” said a Pepsi spokeswoman.

While the company for now is not divulging further details about the device, though sources suggest that one smartphone is called the Pepsi P1. It is expected to feature a 5.5-inch 1080p display, a 1.7Ghz MT6592 chipset, along with 2GB of RAM bundled with 16GB of internal storage. Camera things are expected to feature a 13MP rear camera and a 5MP selfie cam. Juicing up the device will be a 3000 mAh battery, while the smartphone will be running Android 5.1 OS. It is rumored to get a price tag of around $200. More details about the device are likely to be unveiled on October 20. 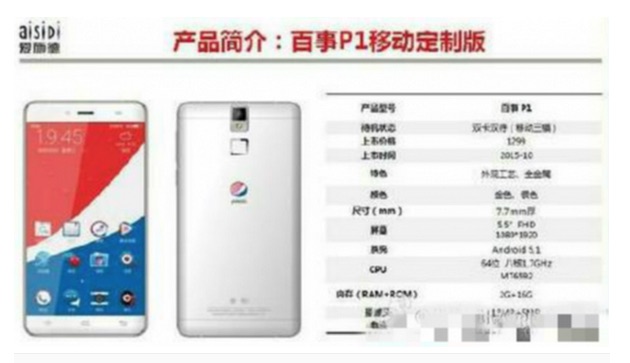 It is worth pointing out that Pepsi already has a number of licenses across a slew of categories. Just last year, it tied up with Danish luxury stereo and TV maker Bang & Olufsen along with Italian shoe manufacturer Del Toro. It’ll be interesting to see whether Pepsi will be accepted as a smartphone brand in the country. Moreover, the fact that there’s not really any shortage of smartphone manufacturers in China.

We are pretty sure many of you would be baffled to find out that a cola manufacturer is getting into the smartphone business. Though the company is making these devices exclusively bearing in mind the dynamics of the Chinese market, who could be open to the idea of a beverage company manufacturing a smartphone.