After inviting beta testers on rival platforms for its digital personal assistant Cortana, Microsoft has now released both Android and iOS versions of the app. Cortana is now available for download via their respective app stores, and can also be downloaded via Windows 10 Phone Companion app.

Notably, the final versions of the Cortana app aren’t a whole lot different from its beta versions. Users will be able to perform basic tasks such as tracking reminders and setting up notifications, along with voice-enabled support.

Android users will be able to use the ‘Hey Cortana’ feature to ask questions from within the app or while they’re on the home screen, and can also receive text notifications sent to their Windows 10 PC. Missed call notifications also works for Android devices with Windows 10 devices running version 1511 or above. 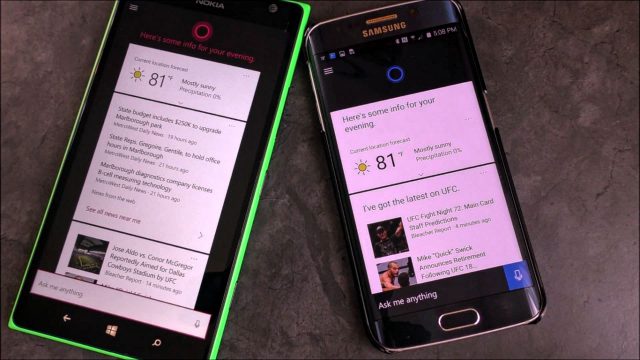 Though, iOS users will be deprived of hands-free voice activation, and text notification features simply because of the Apple’s developer restriction policies. The company most likely won’t open up its iOS enough for rival apps, thereby limiting Cortana’s ability as a cross-platform option by imposing such restrictions. It’ll just be able to handle the basics such as track flights, packages, weather, interests, and reminders.

However, the CyanogenMod version of the app will be deeply integrated with Cortana, which debuts on OnePlus One this December with update 12.1.1. It will allow Cortana to switch between network modes, turn off the device, activate silent mode along with other features. Though it’s still not as extensive as to how Cortana functions on its native Windows 10 platform.

“This is just the start of our partnership as Cortana will be rolled out to other Cyanogen OS powered devices early next year with even greater functionality, and we look forward to doing even more together in the future,” said Marcus Ash, Group Program Manager who’s been heading Cortana.

For now, the finalized Cortana apps will only be available for users in China and the US running iOS 8 or higher and Android 4.1.2. While it’ll be available in the US on OnePlus One running Cyanogen OS with version 12.1.1 expected to arrive later in December via an OTA update.