Microsoft rolled out Windows 10 Build 14342 for PC for the Fast Ring Insiders, which comes with several new features for the Edge browser and elsewhere.

Coming to the details, among the biggest change that the Microsoft Edge benefits from is enhanced support for extensions. As part of the change, users will now able to download and install extensions directly from the Windows Store. That way, all future updates for the extensions will be downloaded and installed automatically from the Store itself.

The above would mark a break from the current practice where users had to extract and load extensions from a local folder. With the latest update, users will also be required to re-install the extensions again from the Windows Store.

The update also introduces several new extensions that users can try out. These include the likes of Pin It Button, Mouse Gestures, Reddit Enhancement Suite, Microsoft Translator, and OneNote Web Clipper, all of which can be sourced from the Windows Store. That’s not all as popular ad blocking extensions, AdBlock and Adblock Plus are also available now.

However, Microsoft has cautioned against installing and running both AdBlock or Adblock Plus at the same time as doing so might lead to issues with viewing sites in Edge.

The new preview build also re-introduces the Swipe navigation feature in Microsoft Edge. It has been one of the top requested features for the Edge browser and allows simple swipe gestures to navigate between the previous and present pages being browsed. Not surprisingly, the same will also be made available in the forthcoming update for Windows 10 called ‘Anniversary Update’.

Other highlights of the latest build include a new dark theme for the User Account Control dialog box with the header featuring a matching blue shade. 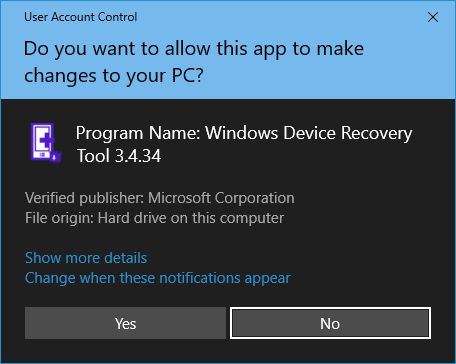 The Skype UWP Preview app too has been updated in accordance with the users’ feedback. Among the changes to be seen here include the ability to switch between different Skype accounts along with a new dark theme here as well.

Further, the icon representing Windows Ink Workspace has been given a once over so that the same is now more expressive besides being in line with the other apps present in the taskbar.

The latest build also enables users to dismiss notifications by clicking the mouse scroll button. Users simply have to middle-click on the app’s name to dismiss all notifications pertaining to that app.

Even the Feedback Hub too has been enhanced in that it has now been made smart enough to suggest the categories or subcategories that the user’s feedback will be most relevant for.

Meanwhile, Gabe Aul has also stated they intend to introduce the feature whereby certain websites can be made to launch an app, something that Microsoft had said it is keen to work on during its Build 2016 conference. It’s still a work-in-progress thing and further developments on this are expected in the future builds.

She has been writing columns on consumer gadgets for over 2 years now. Her areas of interests include smartphones, tablets, mobile operating systems and apps. She holds M.C.S. degree from Texas A&M University.
Posts created: 386

April 1, 2021
There are no comments yet No comments