An image purported to be that of the upcoming Samsung flagship, the Galaxy S9 has surfaced online providing us with a clear view of what the phone has to offer when launched. The image also sort of confirms many of the rumors that we have had of the device so far.

Those include a f/1.5 camera which again will be a first on any smartphone camera. For the non-technical nerds, the lower the numerical count here, the bigger is the opening and hence, more is the amount of light focused on the sensor. This, in turn, ensures better clarity even in low-light conditions.

In fact, things are likely to be even larger with the S9+ which is rumored to come with an even larger f/1.4 aperture. That is not all as the S9 is also touted to come with a variable aperture feature with a range extending from f/1.5 to f/2.4 at the lowest, the sort of which is already available with the W2018 flip phone Samsung offers but in select markets. The retail box also reveals the ability to shoot video at super sow motion of 1000fps. The rear cam is also mentioned to be of 12 mp OIS resolution while the front selfie camera will be of 8 megapixels.

Further, while there is no mention of the chip that powers the phone (though it is widely believed to be the Snapdragon 845), the box does reveal it is going to have a 4 GB memory coupled with a 64 GB storage. 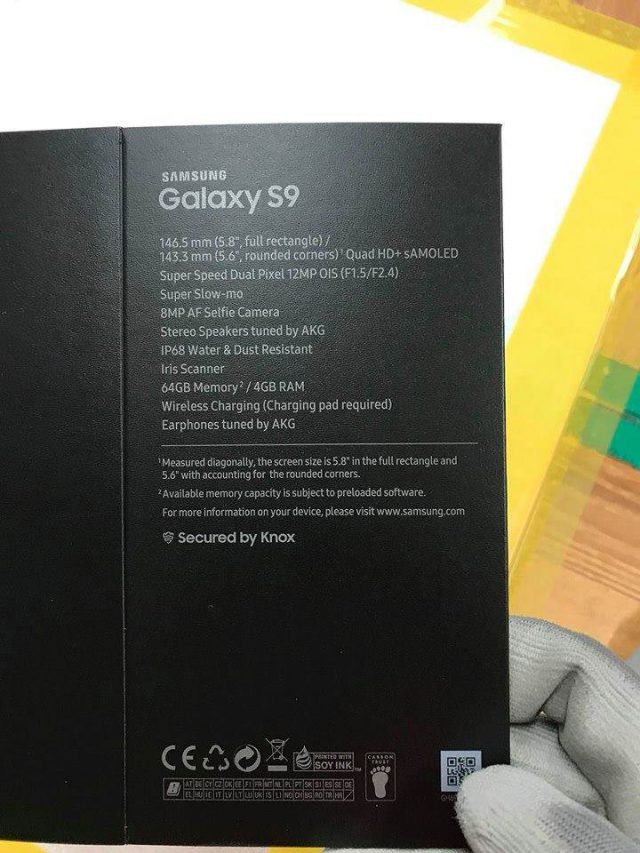 Among the other features that the box reveals includes IP68 levels of water and dust resistance and wireless charging, stuff that are pretty much for the taking with any flagship phone. An iris scanner too is mentioned which again is very much in line with rumors going around about the S9 featuring a new facial recognition feature.

The phone is also likely to offer a better audio experience what with AKG tuning the earphones as well as the stereo speakers. Of the latter, some sources also claimed there would be dual stereo speakers this time compared to just one on the S8.

As for the display, it’s going to be 5.8-inches of QuadHD+ sAMOLED panel donning the front of the phone. That again is the same as we have seen with the S8, which quite reinforces what is being speculated all along, that the S9 will carry forward the same Infinity Display theme that first debuted with the S8.

On the whole, while there aren’t surprises here, the latest leak does make us yearn for the real thing to emerge. Fortunately, we won’t have to wait long as Samsung has already confirmed the S9 will land during the MWC itself during end February.