Apple’s crusade against its employees who tend to leak proprietary company information has entered a new phase with the company issuing fresh warnings against engaging in any such tactics. In a memo circulated internally, Apple said leakers not only stand to lose their job but are also liable to be charged under existing criminal laws.

This perhaps applies more to Apple whose iPhone and iPad models are among the most awaited devices in the world. The company is also usually extremely secretive about its product plans and is least inclined to reveal any information about its future products or software features. While some companies relies on these very leaks to create hype about their forthcoming devices, that perhaps isn’t applicable to Apple.

Also, not all leaks are intentional or are done to gain monetary benefits or such. In fact, employees of major tech companies are often befriended on social sites by publications always on the lookout for scoops. The employees often end up revealing things they ought not to, leading to a huge fracas later on.

Not to mention, such leaks, more often than not, hurt the prospects of an unreleased product. Rival companies too get a head start in planning a response while the product itself loses some of its sheen once its features become known beforehand.

Meanwhile, in another interesting leak pertaining to an unreleased Apple product, images of a golden iPhone X has emerged online. The leak has its origin in the FCC and is strictly within the provisions of the law as the said product info has been released post the lapse of the 180-day confidentiality clause. 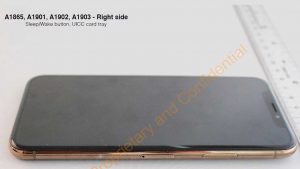 The said iPhone X is seen sporting a shade of gold with even the sides donning the same color. It happens to be the regular iPhone X model that Apple had submitted to the regulatory authority for due clearance though the product never got released. As such, it is only the space grey and white/silver colors that the iPhone X is available in at the moment.

Apple had never made it known what led them to shun the golden iPhone X plans though experts believe production inhabitation made the company to discard the color option as a whole. The iPhone 8 and iPhone 8 Plus continues to be available in the golden shade though. Apple had also released a bright red colored version of the iPhone 8/8 Plus as part of its support of the PROJECT RED anti-AIDS organization though the same isn’t applicable to the iPhone X.