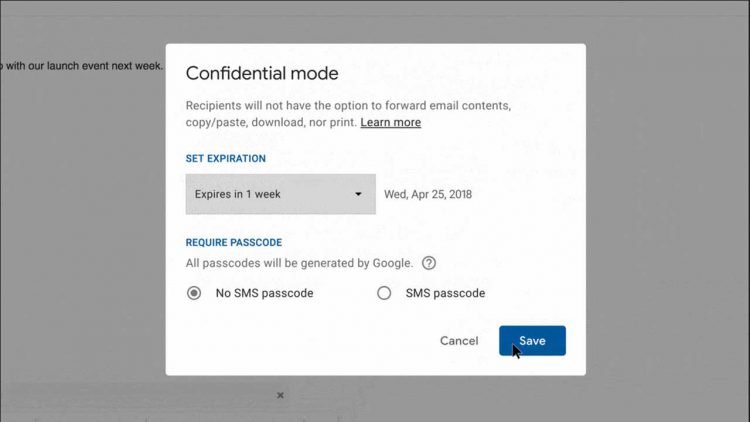 The new Gmail is here, and among the many new features set to be part of the revamp package include emails that will disappear after a set time.

That would be part of the new Confidential Mode that made debut with the updated Gmail. Users will have the option to set the expiry date for the message which again can range from a minimum of 1 day to a max of 5 years. For additional security, the Confidential Mode emails require a passcode to open the same. The passcode is again texted to the user’s phone as a security measure.

Google said the Confidential Mode emails could not be forwarded, copied or printed. In other words, such emails are solely for the purpose of comprehension by the receiver and will self-destruct at the precise set time. That said, there is no stopping from getting a screen grab of the message which is the nearest that anyone can get to making an electronic copy of the mails.

Another nice thing with the Confidential Mode is that it isn’t Gmail specific as it is going to work when the mail is sent to other email accounts as well. Interestingly, such a feature with the message disappears after a set time has been the case with SnapChat messages that first started the trend of vanishing messages.

Among the other features expected to be included in the Gmail, update include snoozing. As the name implies, users will have the option to set a time post which Gmail will notify the user about replying to a message that might be pending.

There will also be Nudging where email that Gmail believes is important will be pushed higher up the priority ladder. However, that would be limited to only three emails per day. Similarly, mobile users will have the option to set a notification for only the important messages against the current trend of being notified each time a new email message appears.

Then there is going to be a color-coded warning for suspicious looking email to prevent phishing attacks. Attachments will be depicted as easily identifiable fixes for convenience while there is going to be smart reply options for desktop as well. Calendar and tasks setting too will henceforth be housed in a side panel for ease of access.