OnePlus 6 is finally here, ending the months of rumors and speculations we have had on the device so far. And the wait so far seems to be worth every bit, what with the phone proving to be as impressive with its specifications as it is with its looks.

Much of the OnePlus 6 again isn’t a surprise given that we have already known almost all aspects of the device. So there is the north at the top while the bottom has a slim chin, with the rest being the display, all of the 3.28-inches of it. The display is a glorious OLED panel having an aspect ratio of 19:9 lit up by 2280 X 1080 pixels.

Also, as has been stated earlier, the notch can be camouflaged to take care of those who are allergic to it. While that is great, the other nice aspect with the OnePlus 6 is that the overall dimensions remain much the same as the 5T even though there is now a bigger display in place. That again has been achieved by scaling down the bezels significantly.

The OnePlus 6 also comes across with a fresh new design approach. That includes the rear glass panel while the slider that allows the ring mode to be changed is now shifted to the right. The dual rear cameras are now placed in a vertical stack along the center, just above the fingerprint scanner which again is rectangular this time.

Also, while still on the camera, it happens to be the same combination of 16 MP and 20 MP as on the 5T though there sure are several improvements made to it. That includes a better f/1.7 aperture for better low light photography. Then there also is OIS along with the ability to record slow motion videos at 480 fps at a resolution of 720p. Similarly, there is a 16 MP f/2.0 aperture camera at the front for selfies or video chats. 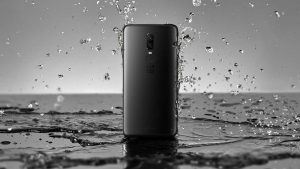 The basic specification too is the familiar Snapdragon 845 chipset working in tandem with memory options of 6 GB and 8 GB. However, there are three storage options of 64 GB paired with 6 gigs of RAM along with 128 GB and 256 GB coupled to 8 GB of memory.

Powering the device is a 3,300 mAh battery while running the entire show is the company’s proprietary Oxygen OS. Fortunately, that is based on the latest Android 8.1, is bloat free and comes with all the latest security patches as well. Other specs include a 3.5mm headphone jack, USB Type-C port, Wi-Fi, Bluetooth, NFC and such.