Asus kicked off its Computex campaign in style, and how. For the company surprised all with the launch of its ROG Phone, a first from the company and one that can even put the Razor Phone to shame. Also built for even the most hardcore of gamers, it’s all but natural for the device to come with some of the most top-tier specs that can put many a laptop to shame.

To begin with, the ROG Phone comes powered by the same Snapdragon 845 chipset that happens to be standard fitment on almost all 2018 flagships so far. But then, there is a twist in that the SD 845 processor has been tuned to have a max clock speed of 2.96 GHz against the normal 2.8 GHz. Plus there is Adreno 630 GPU as well, as is an 8 GB RAM and a choice of storage from either 128 GB or 512 GB.

The phone features a 6-inch display OLED having an aspect ratio of 18:9. The display boasts of a resolution of 2160 X 1080 pixels though the biggest development here is that the display has a refresh rate of 90Hz. Further, there is a 4000mAh battery that keeps the lights on though given how battery intensive gaming can be, there sure are other mans to prevent gamers to ever run out of gas. 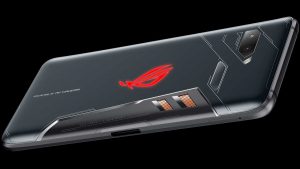 Then there are the other usual smartphone stuff as well, which includes a rear dual camera set up comprising of a 12 and 8 MP sensor combo. An 8 MP front selfie cam is present too, along with a rear-mounted fingerprint sensor as well. A silver ROG logo occupies pride of place at the rear center though the biggest development here is that the RGB backlight can be customized via the dedicated app.

In fact, there are more surprises in the offing given how the phone also features three USB-C ports. So while one is placed along the usual spot at the bottom, there are two conjoined ports along the left. The idea here is to keep the phone charged but without the cable coming in the way of playing.

Also, of course, its half the story so far, with supported accessories being the other half. And these are some of the coolest stuff Asus, or for that matter, any company perhaps ever come up with. Those include one that comes with 3D vapor chamber cooling system and keep the device cool and dry.

An AeroActive Cooler too can be availed of to cool things down. The cooling mechanism comprises of a fan and comes to life once the accessory is plugged in to the two conjoined USP-C port. Then there is the TwinView Dock as well that lets the user to attach a secondary display.

On the whole, the ROG Phone is mighty impressive with its super specifications, quirky looks, and weird but functional accessories. Asus also said the phone would reach showrooms by Q3, 2018 though what remains to be seen if there is a big enough market for such phones. Price can be another consideration as the ROG Phone can never be expected to come cheap or affordable.

Google's latest Pixel 6 monthly update has broken something else, because...