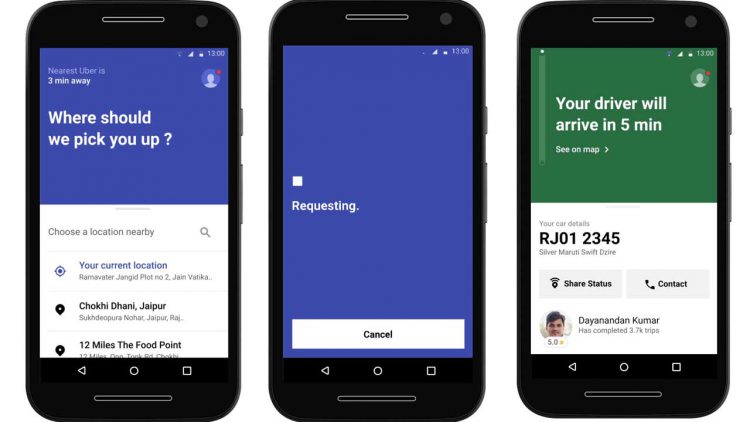 Uber has drawn up ambitious plans to ramp up its operations in India, with things seemingly starting with a new light version of the app named Uber Lite that the company has come up with. And the app is as light as it can get, weighing just 5 MB compared to the over 180 MB for the regular version.

Uber said the new app is primarily aimed at the developing markets and will first launch in India. Also, the app is designed to operate in even patchy network conditions or in areas where network speeds isn’t up to the mark.

As such, there won’t be a map to be seen when the app is first launched. Also missing will be cars zipping around to show the relative availability of cars at that particular point in time. Instead, there is going to be a minimalistic design approach where the user will either have to manually enter the pickup point – if that isn’t getting detected on its own – as well as the drop-off point.

The app will also show popular pickup points nearby for the user to choose just in case the ride is needed for someone else or if the GPS isn’t showing the current location with enough accuracy. The app will next show the list of cars available, together with the estimated fare for the ride to the desired destination. The user will just have to choose the ride of choice and formally request for the ride to complete the booking process.

Also, since there is no map displayed to show the progress of the journey, the app will show a progress bar which will sort of depict how much is still left for the trip to come to an end. However, there still is the option to launch the map for a more detailed view if the user so wishes.

Meanwhile, the app also offers the other usual option such as the facility to get in touch with the driver. Then there is also the option to share the ride status with someone else, which again can be considered a safety feature, allowing near and dear ones to keep track of the journey.

With the new app, Uber is aiming to latch on to a new category of users or expand in areas where internet connectivity is yet to bloom. And the new Uber Lite app could just be key to unlock a whole new segment of the market to serve to.

Apple might incorporate USB-C port on iOS devices from 2019