Huawei unveiled the P30 and P30 Pro at its Paris event. Christened #RewriteTheRules, the event was all about a new future that the Chinese manufacturer has weaved together for us to witness.

And it has been one hell of an event too given that it is not just the P30 duo that was announced but also a whole new set of smartglasses as well. The Huawei Watch GT smartwatch, new powerful Power Bank along with FreeLace earphones too were part of the launch event.

Coming back to the P30 and the P30 Duo, the new flagship phones is clearly about superior photographic abilities which Huawei showed can match those of a DSLR comfortably. For the P30, it’s a triple lens setup that the phone benefits from and comprises of a 40 MP main camera, a 16 MP wide angle lens along with an 8 MP telephoto lens. Huawei is calling it a SuperSensing 40MP Leica Triple Camera system.

For the more up-market P30 Duo, the phone boasts of a SuperSensing 40MP Leica quad camera system. All of it made up of a 20 MP ultra-wide lens, a 40 MP wide-angle lens, a 8 MP 5x telephoto lens along with ToF as well. Huawei is also claiming it to be the highest zoom ever that any smartphone has ever been endowed with.

That amounts to 3x optical zoom, 5x hybrid zoom and 30x digital zoom for the P30. Things are better with the P30 Pro which comes with a periscopic telephoto lens capable of 5x optical zoom, 10 hybrid zoom, and 50x digital zoom. The P30 also boasts of a wide focal range that starts at 16mm and can stretch all the way up to 1343mm. 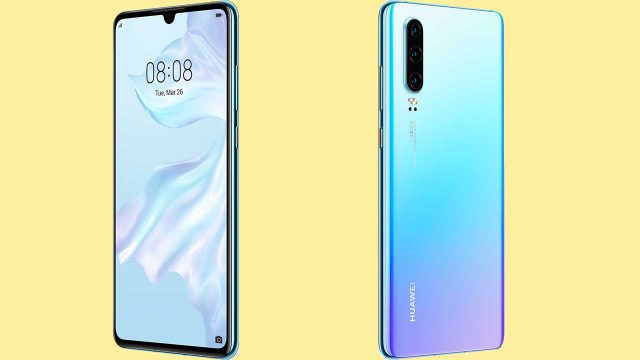 As for SuperSensing tech, it has to do with the Red Yellow Yellow Blue (RYYB) sensors that the phone comes with, replacing the usual Red Green Green Blue (RGGB) sensors that other smartphones rely on. This, Huawei claims allows 40 percent more light to reach the sensor, which naturally translates to better quality pictures even in almost pitch dark conditions.

These apart, the camera on both the phones is backed up with AIS and OIS technologies, besides being HDR+ compatible as well. The company is claiming an ISO value of 204,800 for the P30 and 409,600 for the P30 Pro. Both the phones meanwhile come with the same 32 MP front-facing cam and is AI HDR+ tech compliant.

Among the other features of the phone, the P30 comes with a 6.1-inch screen while the same on the P30 Pro stands at 6.47-inches. Both phones have the same 19.5:9 aspect ratio with FHD+ 2340*1080 resolution. Looks wise, it’s a notched design that the phone comes with, complete with non-existent bezels on the sides and a slim chin at the bottom.

Powering the P30 is a 3,650 mAh battery while the P30 Pro comes with a bigger 4,200 mAh power source. Both the phones support Super Fast 40W SuperCharge tech which ensures 70 percent charge acquired in just half an hour. Plus, the P30 Plus also supports reverse charging technology as well. On the software front, both the phones run EMUI 9.1 right out of the gates.

Apple Special Event 25 March 2019: Everything you need to know

Coming to the price of each phone, the P30 sports a sticker price of 799 Euros while the base P30 Pro with 128 GB of storage costs 999 Euros. The same for the 256 GB and 512 GB model stands at 1099 Euros and 1249 Euros respectively. Choice of colours includes Breathing Crystal, Amber Sunrise, Pearl White, Aurora and Black.