Huawei has come up with a new offering in the mid-range phone segment in the form of the Honor 20i. This also is the first device from Honor’s latest 20 series and ticks all the right boxes when it comes to offering all the right features at the best prices.

Interestingly, the company also had left nothing to guess and had, in fact, revealed all the specs on its official site itself. Pre-booking of the phone too had started via Vmall even though it was only the price that was left to be announced during the launch event. That too conforms to the usual Huawei strategy of offering more for less. 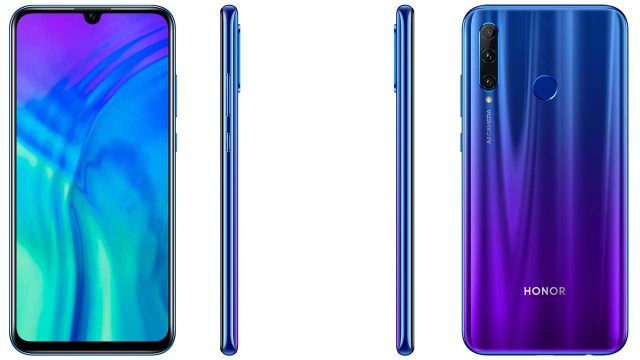 Specifications for the 20i include a 6.21-inch full HD+ display with a teardrop notch at the top and a slim chin at the bottom. That again has become almost the de-facto design language for all mid-rangers, which means there is precious little that sets the 20i apart from the rest.

Powering the device is a Kirin 710 chipset along with memory options of 4 and 6 GB. Storage options as has already been mentioned include 64, 128 and 256 gigs. A 3400 mAh battery keeps the lights on while running the entire show is the company’s proprietary EMU 9 based on Android 9 Pie. Unfortunately, there is no support for fast charging even though the phone does offer a few other niceties such as support for 4G VoLTE, Bluetooth 4.2, GPS and Wi-Fi 802.11 b/g/n/ac. There is a 3.5 mm headphone jack as well, as is microUSB 2.0 port.

Moving over to the rear, the 20i boasts of a triple camera array comprising of a 24 mp primary camera of f.108 aperture. Supporting the same is an 8 mp ultra-wide sensor as well as a 2 mp camera for ascertaining depth info. Huawei also said the camera would be backed by AI-based software for the most optimized images, which includes super slow-motion videos, panorama shots or portrait mode and such.

Color options with the Honor 20i include Gradient Blue, Gradient Red and Black. Availability of the phone starts on April 18 in China. The company has also confirmed the phone will see an international launch on May 21 at an event in London and will likely be named Honor 20 Lite for the international markets. That again makes us wonder if there is another more heavy-duty version in the pipeline that won’t have the ‘Lite’ badging.